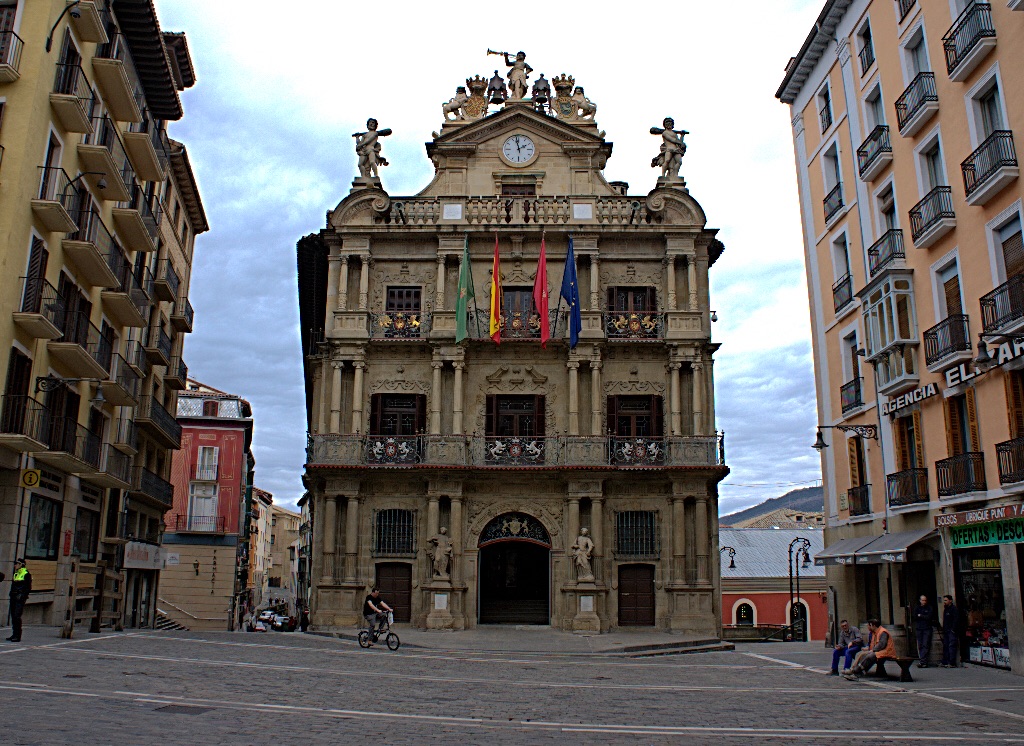 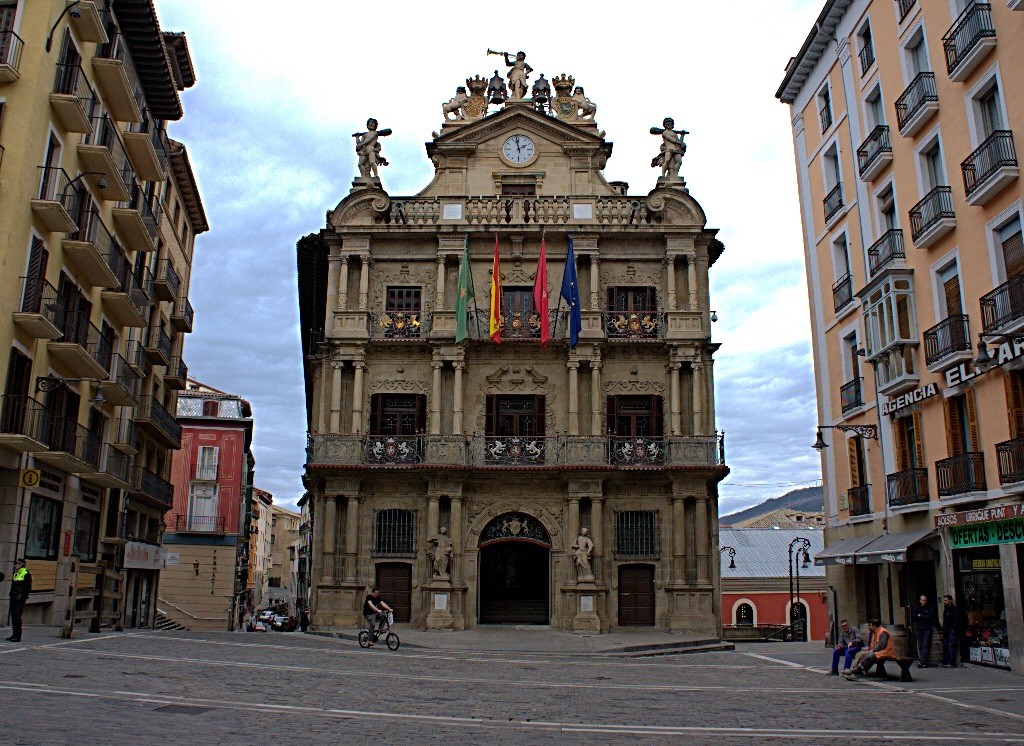 Pamplona City Hall. This is the center of all the action during the running of the bulls in July!

I can’t believe the first week in Europe has ended so soon. Although we did not bike as much, we did get to see parts of Spain as planned. Before I get into that, I just wanted to share some big milestones in my life. 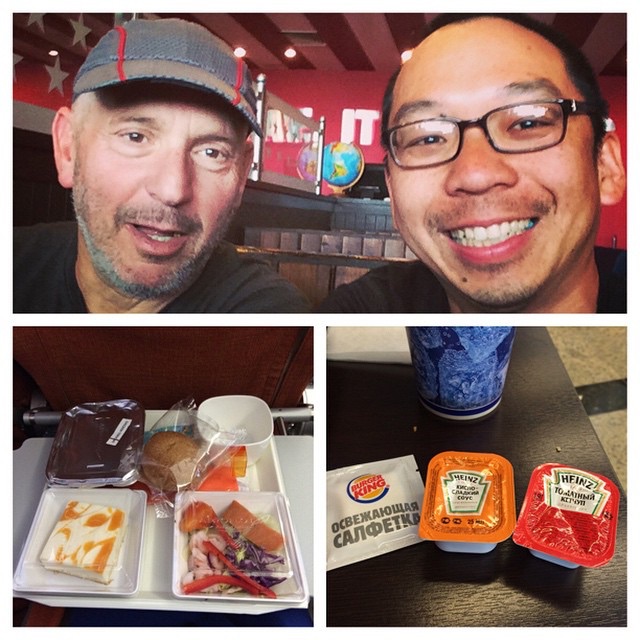 My journey actually started at Harry’s house. He was trying to pack up and move out of his house right before our trip so he wasn’t fully packed for the trip yet. So in the morning of our flight, we spent some time sorting through what he was bringing and packing his bike. We finally finished everything close to 1 PM before Harry’s friend showed up to drive us to the airport and back. We loaded Harry’s truck with our stuff and made it to LAX about 10 minutes pass 2. Unfortunately, Harry left a few carry-on items at home so Liz went back to pick up the stuff and came back.

Luckily Harry had his passport so we were able to check-in. Everything went well. My slightly oversized bike box was overlooked by the attendant. We spent the rest of the time in LAX waiting for Liz to come back. During this time we actually saw paparazzi surround Kim Kardashian, Kanye West, and their daughter walk into the international terminal. Sheer chaos as photog jostled for position.

When Liz made it back, we hurried upstairs to get through the security checkpoint. We made it through with some time to spare so we bought some food to eat before we jumped on the flight. When we got to the gate, they were already letting people on. We were already boarding as soon as we arrived.

Nothing special to report about the flight except that it was very long! We left LAX at 4:30 PM and arrived to Moscow by 2:30 PM their time. We spent a few hours having a couple of drinks at their TGI Friday’s restaurant in the airport while waited for our lay-over to Madrid 4 hours later. The flight to Madrid was tough. We both finally hit the travel wall. I passed out and decided to skip the onboard meal to sleep. I was in and out of sleep for the entire time.

When we landed, we got through customs and picked up our bike boxes before we went to get the rental. Our van that we got from Ford was amazingly cool. Great looking car as it is supposed to fit 9 passengers. Everything fit without any issues. Harry took the first shift to find our AirBnB. The signs in Madrid was so confusing and we didn’t have any maps to find our host until we talked to a few strangers who helped us guide our way. We finally made it there after luckily talking to the Hotel that was located right next store to our host. Crazy coincidence I say. 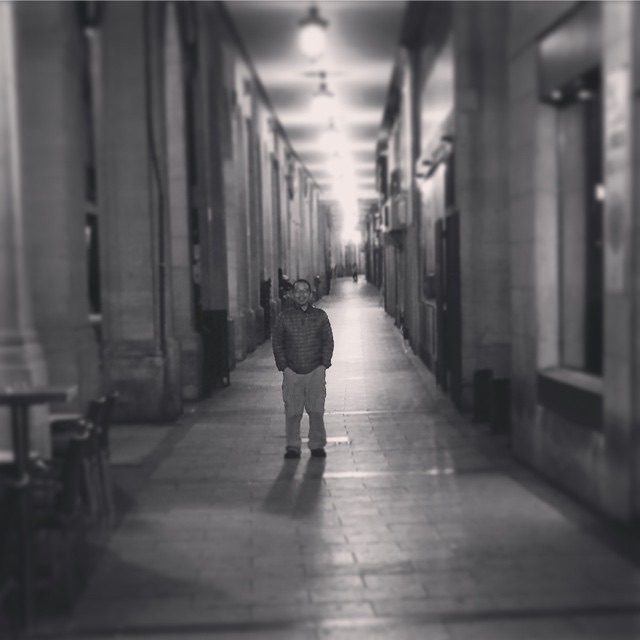 The next morning we went out and got some much-needed supplies for our trip and figured out how to get over to the Rioja wine region. Specifically we ended up driving to Logrono after about 5 hours of driving. When we got there, it was siesta time so the tourism and several other places was closed until 4PM. We found a bar who was still serving and spent a lot of time just chatting.

When we finally got to the tourism office, we were informed that there wasn’t a single tasting room that would have all the wines from the Rioja region. We would need to make an appointment for each winery if we wanted to go. We didn’t have any ideas which winery was good and thought it would be nice that locals can tell us what they like. For the remainder of Thursday, April 9th, Harry and I went to Calle del Laurel which is happening place to enjoy tapas and wine. Highly recommend coming here for a great tapas sampling party with wine. 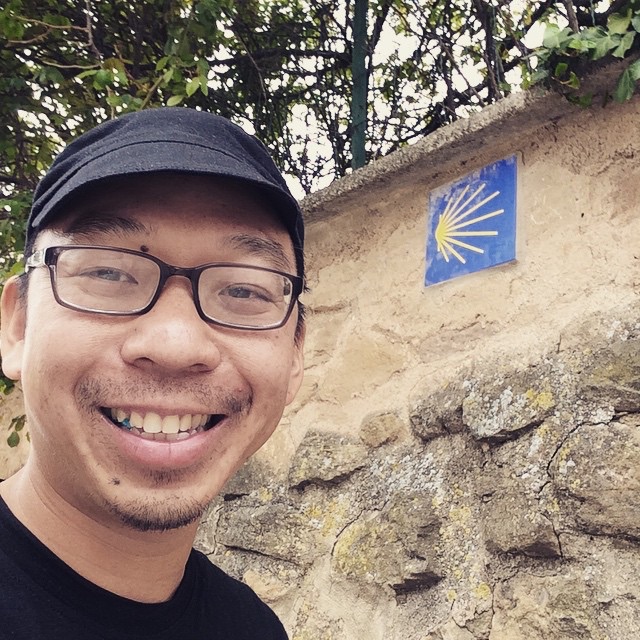 Me with a Camino de Santiago sign. I shall be hiking this trail soon.

We woke up around 8 in the morning to enjoy some breakfast before we started rebuilding our bicycles. Took us about 2 hours to get it done. I know there’s still more adjustments to be made but we will do this on the road.

We drove out of Logrono and made our way towards San Sebastian. Before getting there, we started seeing people along the highway who was hiking a trail called the Camino de Santiago. This hiking trail was highlighted in the movie, “The Way”. Harry pulled over to a little town and we got to meet our first bicycle tourist from Germany. The guy was riding the Camino. The interaction was great and being able to see the Camino de Santiago trail was incredibly fortunate for me and Harry to see.

The fun didn’t stop there. We went into Pamplona where they do the running of the bulls every July. We got to check out the route where they would let the bull run down to the arena. It was such a great little town and to see it in person was also really special to me. Never have I thought that I would be in Pamplona. The Camino also crossed over through Pamplona so we saw a lot of pilgrims making their journey across Spain.

Bikes are built. Ready to roll out Aprill 11th from Hondarriba to Biarritz.

The fun ended when we finished the remaining 60KM to San Sebastian. We spent about 2 hours trying to find the airport to drop off the rental. We finally found it after asking about 8 different people who did not speak any English except the last guy at the gas station. He directed us to the city of Hondarriba which was about 20KM Northeast of San Sebastian. Without Internet access, a map, or a cell phone we were dead in the water. I suppose that’s part of the adventure. We still need to get those things but are taking advantage of WiFi access at our hotels for navigation.

Our riding starts on April 11 when we ride from Hondarriba to Biarritz. We don’t have a definite route so we’re going to wing it. On top of that we haven’t planned out the food and the accommodations issue. Harry found some campsites that we’re going to check out but other than that, it’s going to be a day-by-day kinda of thing. One way or another, things are going to work out. It always done.

By-the-way, the route between Logrono and Pamplona is incredibly beautiful. I shall be back to hike the Camino de Santiago soon.