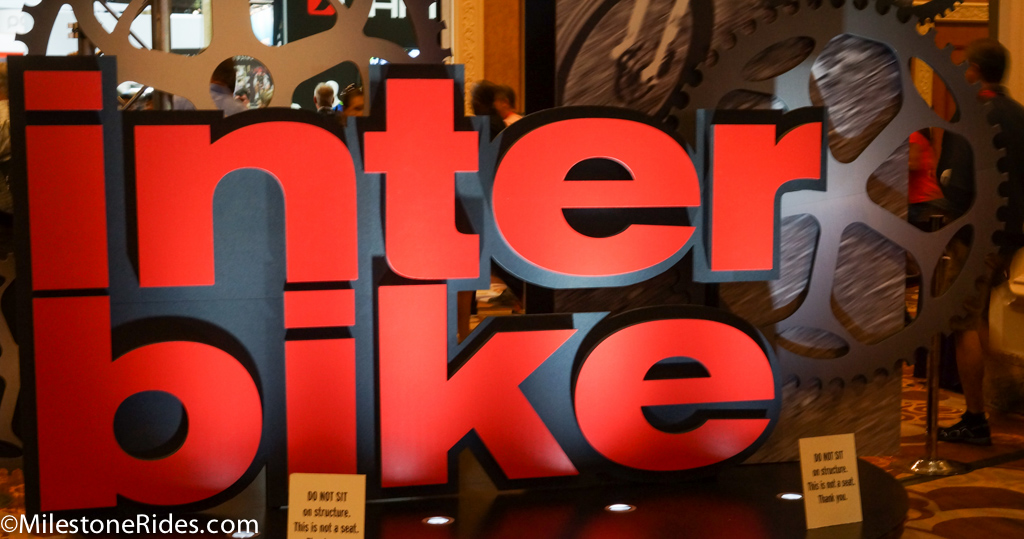 Our attention this week turns to the City of Sin to take part in the premiere bicycle industry event: Interbike 2014.  For those who don’t know what Interbike is, it is the biggest bicycle trade show of the year in North America, which takes place in Las Vegas, Nevada.  It is the Mecca of anything bicycling since 1982.  This will be my first time partaking in this convention.  I even had a hotel booked up since February of this year as soon as the dates were announced.  I initially did not have a clue on how to get the tickets, but was determined to get here one way or another.  After last-minute scrambling (and begging), I was elated to receive the confirmation email in my inbox over the Labor Day weekend. 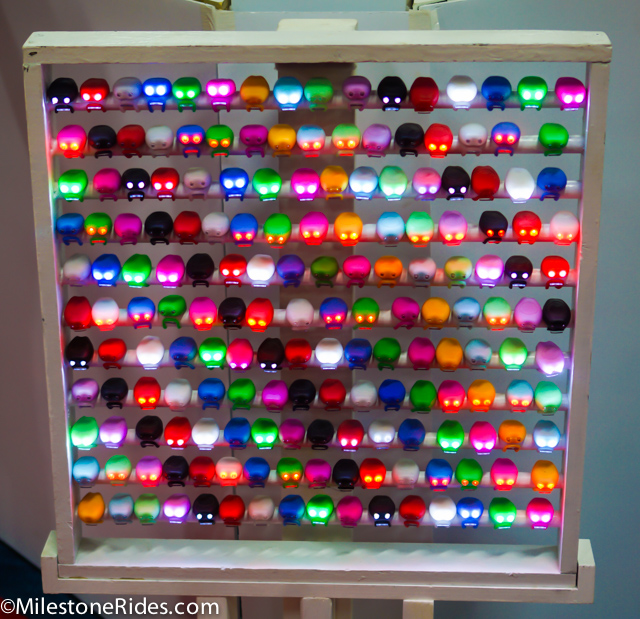 It was 11:30 when we arrived (I was traveling with my friend Julia of CICLE.org) at the Mandalay Bay Convention Center.  We followed the signs toward the registration hall downstairs.  With our confirmation emails loaded on each of our smart phones, we scanned the provided bar code and was given our printed badge and lanyard.  We eagerly rushed up to the exhibit halls, passing other people with the same lanyard proudly strung around their necks.  The environment was buzzing as we entered Zone A’s exhibit hall.  We were immediately overwhelmed by the sheer number of people who filled each empty space of the hall as we glanced in every direction of the room to see aisles and aisles of exhibitors spanning multiple zones.  Every major industry player was here.  Their logos proudly displayed to help guide us to their booths like a moth to a fire.  We spent the hour meandering through the showroom and its plethora of aisles. 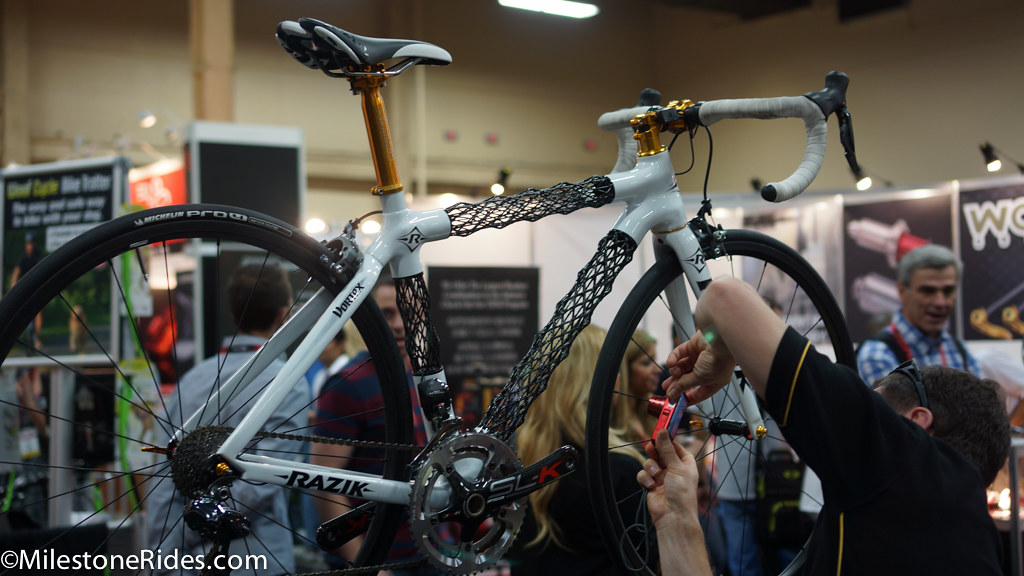 We were in the manufacturer section, as the exhibitors there were primarily from places like Taiwan and China who mass produce various bicycling components.  The most fascinating product was a bicycle frame by Razik Cycles, which had its top tube, seat tube, and down tube constructed in a carbon fiber weave.  The sales people reassured all attendants that the parts was strong enough to withhold the day-to-day demands of bicycle riding.  The bikes look really beautiful, but I’m not sure if I would take it on long bike rides, definitely not on bike tours.

We visited selected companies, like Surly, Wilier, and the people of the Torch apparel and Revolights, before we called it a day.  We were overwhelmed with the sights and sounds, and we were both exhausted and hungry as we made our way out of the convention center and back into our car to find food.  We needed the night to regroup and recover from the exhaustive birage of sights and sounds, as well as the physical weariness of being in a car for a few hours and walking through the entire convention center. 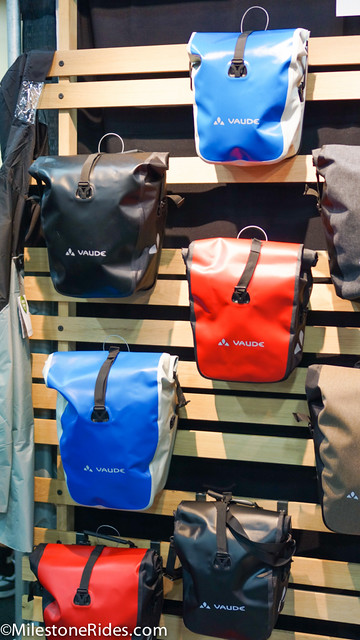 Our Day 2 was much better.  We connected with Justino of Velosafety.net to plan our attack.  The 3 of us rode our bikes over to the outdoor ride demo area and locked our bikes in the bike lock up area behind the convention center.  I made my way to the Vaude booth and had the chance to review their collections of panniers & luggage bags.  The sales representative was also an avid cyclist named Claire who resides in Los Angeles and New Zealand.

We wandered over to the Bern helmets booth and reconnected with the West Coast representative, Cecilio, who showed us the various helmet offerings.  Cecilio reminded me that he had a helmet for me to take on my next bike tour to review.  More on that later. 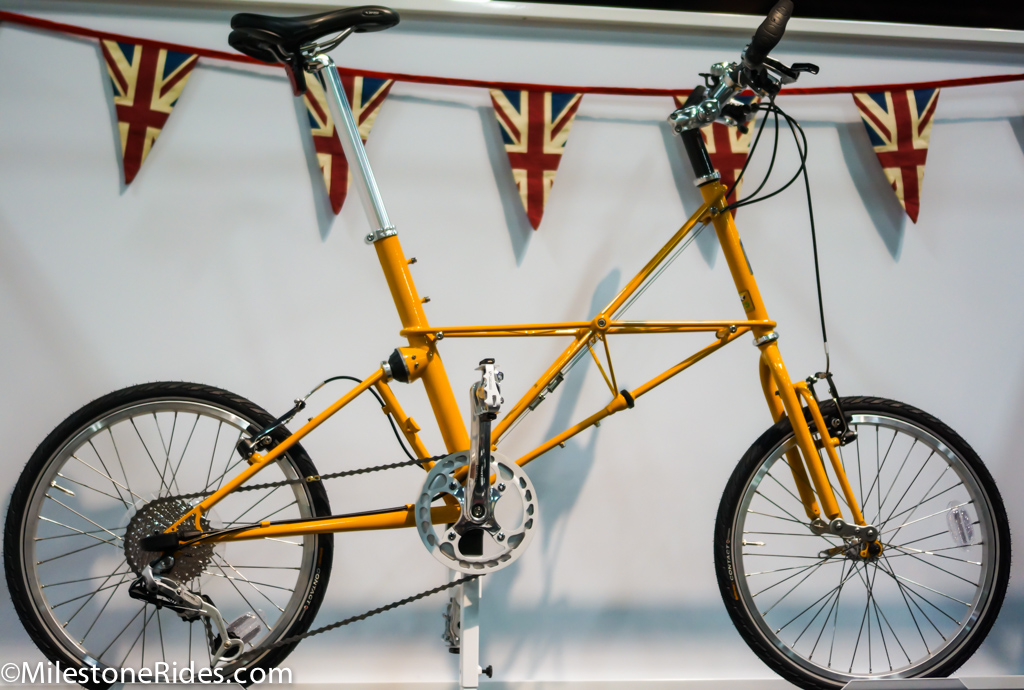 The Pashley booth had all their models on display.  The salesperson proudly proclaimed that all their bikes are entirely handmade to specifications.  Their Moulton brand is an engineering marvel as the frame interweave into one another and cables parallel each angle of the frame.  I asked if they have a bike touring model, but unfortunately all their bikes are primarily used for commuting or urban riding.  They are gorgeous bicycles! 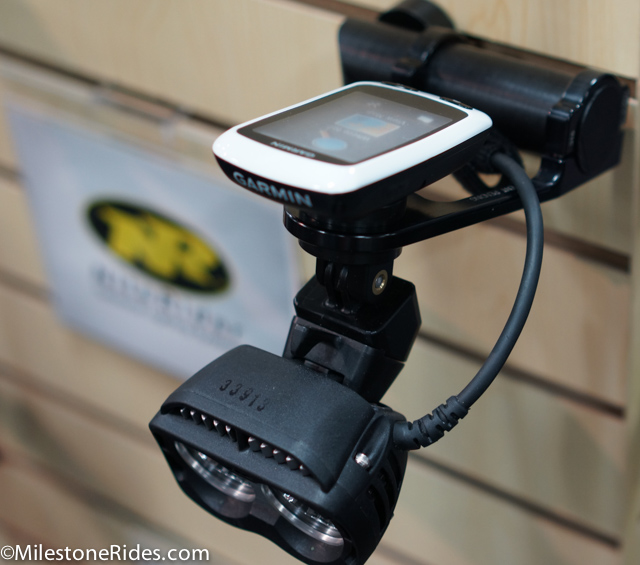 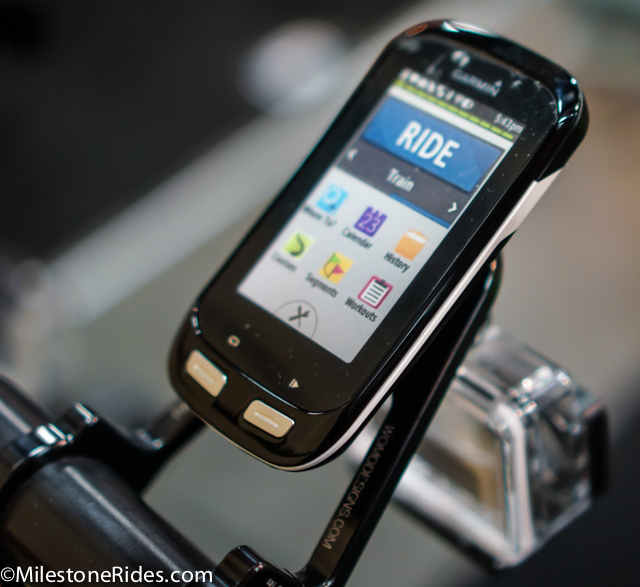 I spotted the familiar Ortlieb logo and wandered over to that booth only to discover a really cool company called WoMo Designs.  They develop cool extension mounts that allows you to mount things like front lights, GoPro camera, and GPS devices on both top and bottom of their mounts.  Their design is unique as it is supported by 2 arms to insure that the weight of all devices are reinforced onto the bike handlebar.  They offer multiple attachment options for other devices of your choice.  I’m hoping to get something to review on a tour.  Fingers crossed!

We stopped by the Nutcase booth when 3 artists working on their pieces caught our attention. They were mainly coloring and retouching some paintings.  Nutcase was giving away helmets that were inspired by each piece.  We shamelessly dropped our business cards hoping to win one of these beautiful helmets.  Unfortunately, we were fruitless in our attempt. 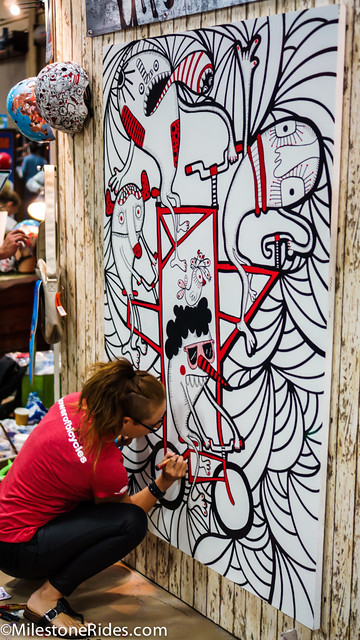 I finally spent some time at the Co-Motion booth to check out their newest bike called the Siskiyou.  This is their entry to the 650B segment.  According to the sales representative, this beautiful bike uses the same thick tubing like much of its siblings from the tandem side of things.  They also stand behind their quality as each of the bikes are built-in the US. 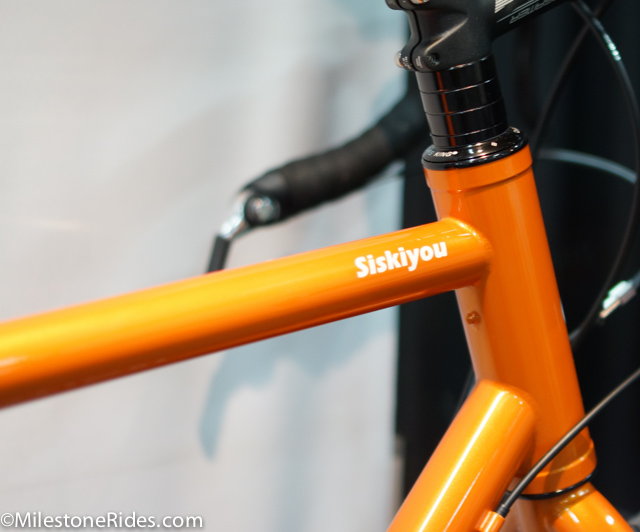 We were all thoroughly exhausted and made our way back to the hotel for a 1 hour power nap at 4PM.  We regrouped and returned to the show to meet up for the 6:30PM ride with New Belgium and Bike Hugger in the parking lot.  The crowd grew to close to 200 riders while we waited for people to sign their waivers and receive their wrist bands and pog for free drinks at the end of the ride.  Our group included a cool music bike blasting tunes and honking at local traffic while we navigated down side streets and through the Vegas strip heading north towards Downtown Las Vegas.  We even had a tall bike, recumbents, Xtracycles with photographers sitting backwards, bikes lit up by Revolights, and folding bicycles on the ride.

The ride was magical as our group took over the streets and greeted the tourists with, “Happy Thursday!”  We eventually made it all the way to Fremont Street where we ended up at the ? bar. We took the obligatory photo with the Downtown Las Vegas sign and found a taco shop in the food court.  We then walked over to the Atomic Liquors to redeem our free beer from New Belgium and took part in the bike race that surrounded the bar.  After one drink, we called it a night and pointed our wheels south, back to the Mandalay Bay.  We took Las Vegas Blvd before Stratosphere Hotel and found our way down Industrial Way.  Because there were four of us riding back, we were all lit up and took the lane back.  It would have been harder to ride back alone, so I was thankful to have everyone there.  Las Vegas is a scary place to ride, even at night when traffic is less, but the cab drivers are aggressive.  We were also afraid of possible drunk drivers on the road at that time.  Fortunately, we made it back to our hotel for a quick shower and bedtime. 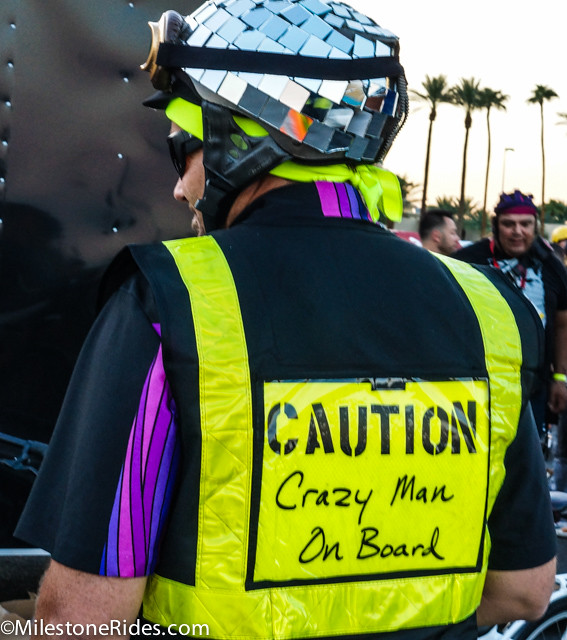 All three of us decided to get to the last day of Interbike by 8AM.  Unfortunately, all three of us neglected to check the start time which was at 9AM.  We each spent the morning working on various projects as we waited for the doors to open.  We went through individually, and I talked with the people from Fly 6 who makes the rear light that has a HD camera (720P) built-in.  The guys told me their next prototype is going to be out before the end of the year, which will be smaller with a better camera and improved battery life.  They are also working on a front light with a camera as well in 2015.  Look for good things to come from this company. 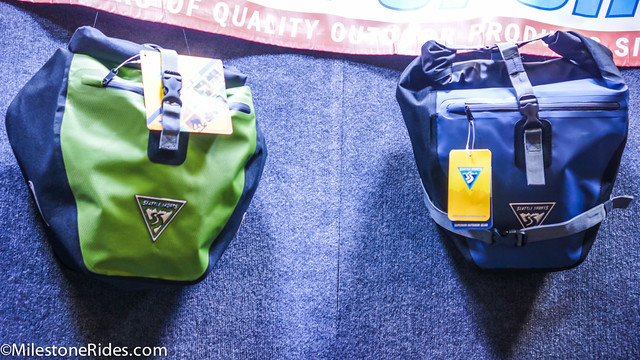 I also talked to Seattle Sports who featured waterproof panniers that are RF welded.  They come from a paddling background since 1983 as their products were made to be waterproof specifically for that sport.  They’ve only started making panniers in the last 6 years, and from what I can tell, they produce pretty good quality things.  They are also trying to move a lot of the manufacturing back to the US, which is currently 30% of their operations.

I spoke to 2 different insurance companies: Spoke and Markel.  Each company offers roadside assistance, coverage in 50 states, and a premium of 7% to 8% of the value of your bike.  Markel actually offers their service worldwide as well. Coverage also includes stolen components, like your tires or seat posts.  Spoke claims that they were first in the industry who offers better roadside assistance than Markel.  This is definitely a topic to look at in the near future when comparing the companies out there. 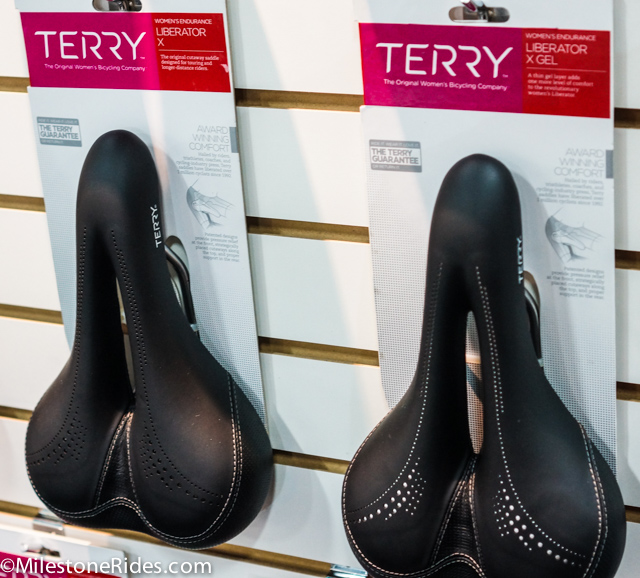 I decided to talk to the people over at Terry who manufactures comfortable seats for both women and men.  Their touring option, called the Liberator Y (for men) and X (for women), are their bread and butter for years on out.  They were the first to have the center cut-out on seats, and from what I gathered from other bicycle tourists, one of the best seats to sit on while touring.  The company also sells women bicycling apparel as well. 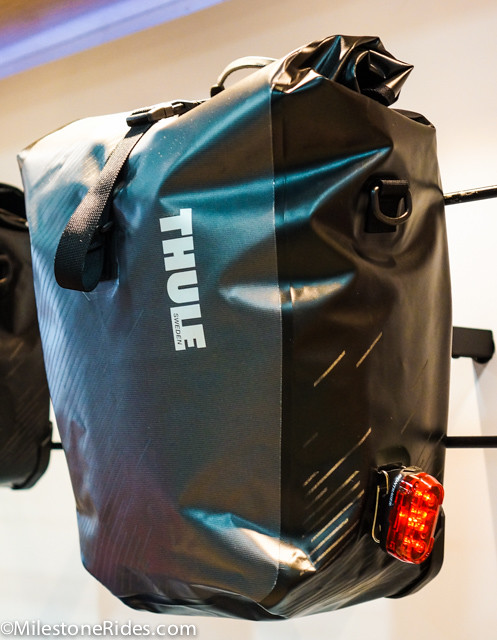 The final booth I checked out was Thule, who is known more for their outdoor gear roof cases and bike racks.  They offered a line of panniers that rival many of the water proof options that are out there.  Unfortunately, sales representatives were not available for a quick conversation. 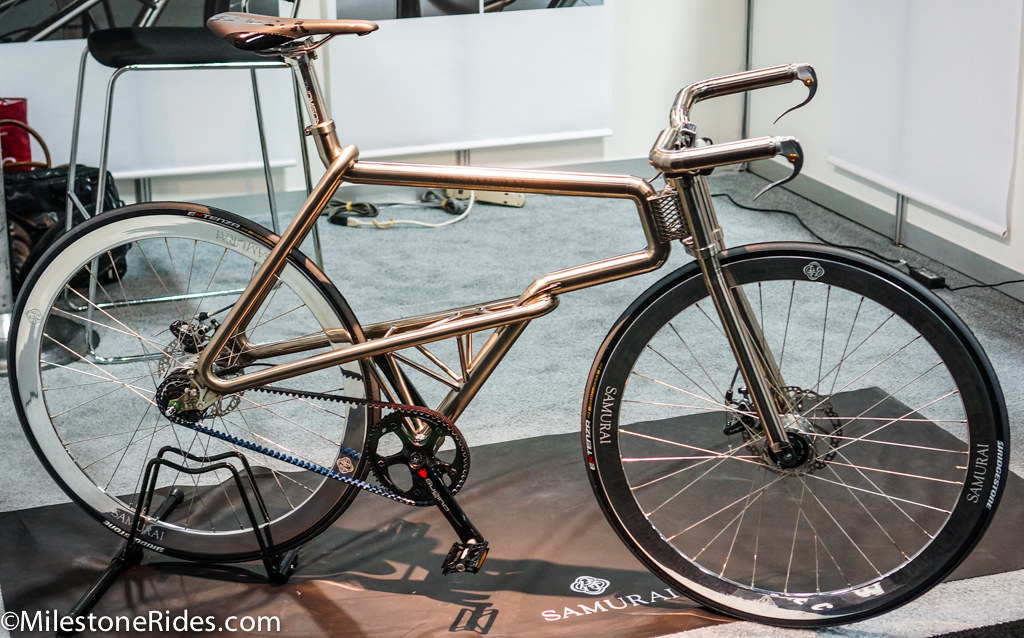 I spent the last few hours of Interbike hunting down deals with Justino.  He scored a few items from Chrome, while I caught up with other Los Angeles contacts.  I was not looking to buy anything, but we saw people ride off with $60 single speed bikes or $125 fat bikes from companies who did not want to bring these bikes back overseas and pay for shipping or taxes.  As I walked out of the convention center, I was again tired, but satisfied.  I made the best of my first Interbike.  There were definitely things I could have done better and things I should have done to make my experience a more valuable one.  I’ll cover that in the next blog post.