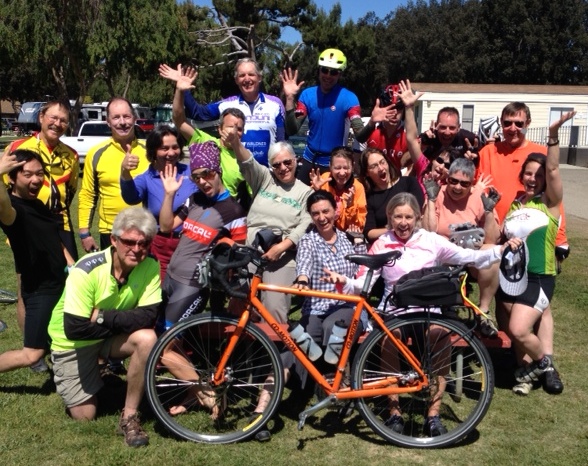 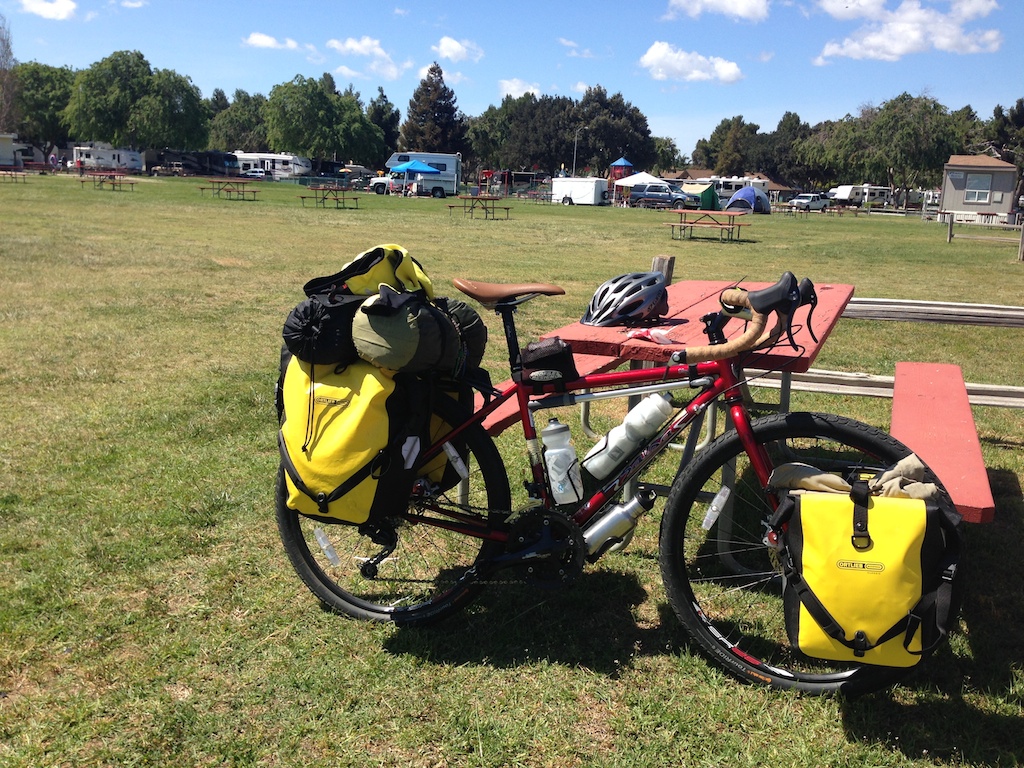 Last fall, I decided I wanted to learn more about bike touring professionally and begin tracking every one of my milestone rides, so I started this blog.  I also decided that I should be trained and learn from people who have been doing this for awhile.  That meant i needed to sign up for Adventure Cycling Association‘s Leadership Training Course (LTC). 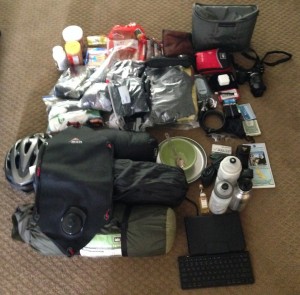 What I carried on my touring bike.

The earliest class that was offered in Southern California was from March 31, 2014 to April 4, 2014 in Buellton, California.  At a $499 price point, I thought this was a good value to find out how Adventure Cycling Association’s (ACA) approach in leading bike tours so I quickly reserved a spot for the class.  ACA’s reputation has always been highly regarded in the touring world as they offer over 80 bike tours a year and great maps for different tours around the country.  They are a valuable resource for anybody wanting to travel around the country.  Feel free to ask your resident bike tourists, and I bet you’ll see that the majority of the people out there know who they are. 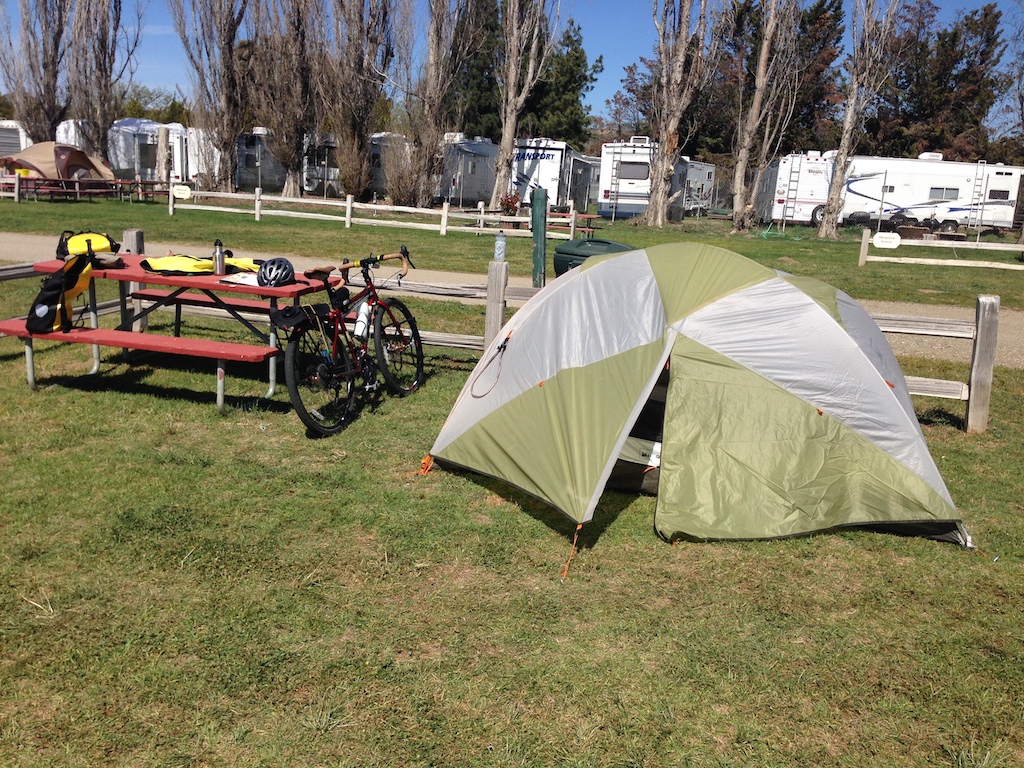 My home for the week.

Coincidentally, my LTC training week was only 2 weeks after I finished my LCI.  I had only one week to absorb my learnings from LCI, and then I was off on a bike tour to Buellton.  My original plan was to drive up there, but decided that I needed a small adventure, so I decided to make it a mix-modal adventure to my destination and left a day earlier on March 30th.  I hopped on the first train out of Union Station on Sunday and made it up to the Surf-Lompoc, California Amtrak station by 11:40AM.  The station is in the middle of no where except for a train track, a beach, and 1 road leading into town.  I pointed my wheels eastward and began pedaling.  With some help from Mother Nature, I was able to ride on a very good tailwind into Lompoc for the first 10 miles.  Two hours later, I found myself sailing past farm lands on a 2 lane highway into the Flying Flags RV Resort in Buellton.  This was going to be my home for the next 5 days.

The Flying Flags RV Resort provided a large open grass field for primitive camping options.  I use the word “primitive” loosely as they had running water, shower facilities, a laundromat, and lounge to watch cable TV.  It is an ideal place to stay for those who want to try tent camping for the first time.  I pitched my tent near the group camping area because I thought we were going to move into it once the ACA instructors came.  Fortunately, we didn’t need to do any moving since we had 24 people in our group and fitting all the tents and cars would have been impossible, so I got to stay put.  This was a good thing because we got rained on for 3 days in a row.  Thankfully, my REI Quarterdome T2 Plus held up like a champ.  My equipment and I were dry inside while the rain cover was drenched on the outside. 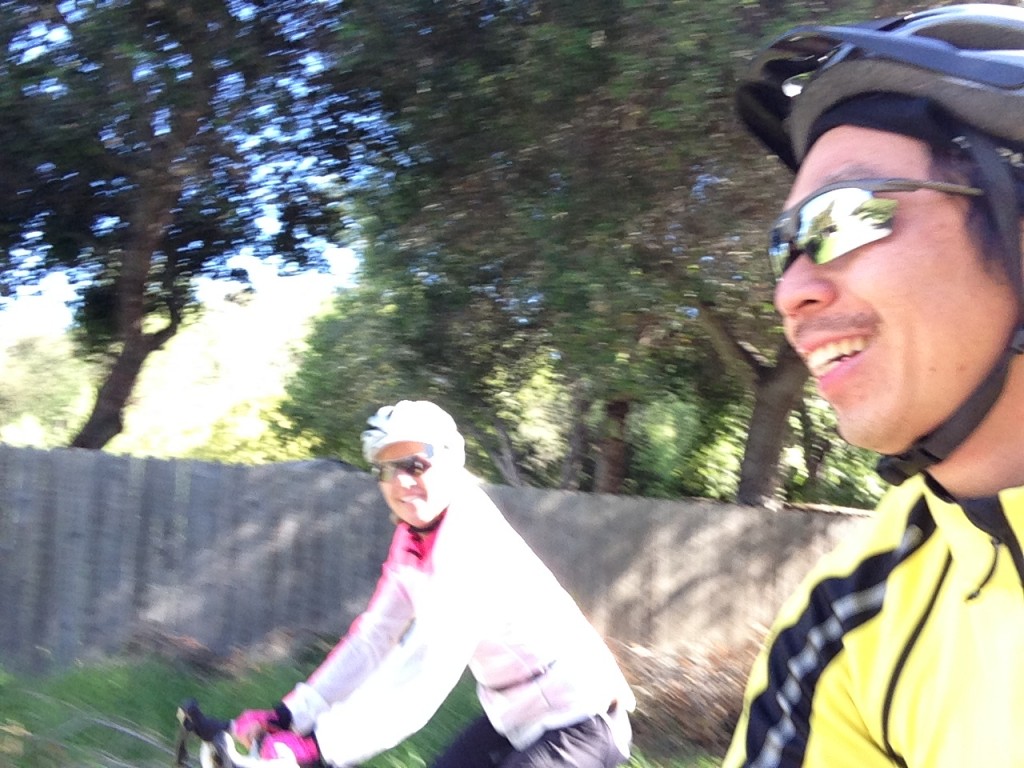 The first day of training started at 4PM sharp.  Our instructor, Lynn Hamilton, was energetic and friendly as she greeted each participant and handed us our ACA warning triangle and water bottles.  We had our introductions and went over the agenda for the rest of the week.   We were given our cooking assignments.  I was to cook breakfast and provide lunch on the last day with my partner, Margie.  The other 3 instructors, Sally, Kevin, and Pete, cooked us dinner that night along with breakfast and lunch the next day to set an example.  We are suppose to do something similar when we lead tours, so this training was modeled after a tour.  The food was bought with a daily stipend from ACA, about $72 a day, which was more than enough for the meal.  Lynn also went over the leadership style that was expected from their leaders, being more hands off and asking the leader to allow the group to establish their own personality and jump in only when required to.

The second day started at 7AM with breakfast, and then we got into the course where we discussed multiple facets of bike touring.  We talked about the 4 types of bicycle touring trips that ACA offered: self supported (contained), van supported, inn to inn, and events (fully supported).  We talked about building a positive group rapport through the use of assigning cooking duties and carrying shared group equipment for self supported trips.  This was a very interesting concept as I don’t think any other touring companies use the same methodology because many companies are very service oriented and would do most of the work, rather than asking their participants.  I liked the work philosophy as I think it does build a stronger group bond which is essential for the longer self supported expedition trips. 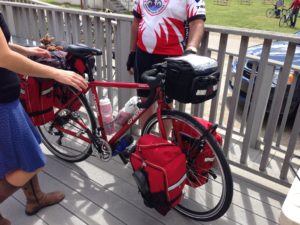 For the third day, we got into role playing.  These were great exercises.  We acted out different scenarios from tours and each participant took turns to be the tour leader and dealt with each of these situations.  We all did very well and had fun impersonating uncooperative tour participants.  The other presentations for the day was led by each of the advisors, who took turns showing us 3 specific aspects of bicycle touring: cooking gear, packing for a self-contained tour, and bicycle mechanics.  We took about an hour for each topic to be presented.  The cooking gear was very straightforward, so we’ll dive deeper into the other two topics. 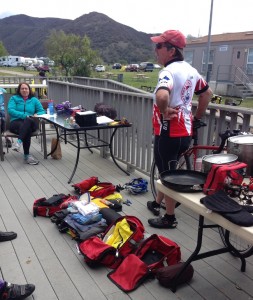 Pete unpacking his loaded bike for us.

I learned 2 things from the mechanical side which are very useful.  You can adjust your seat height accurately by putting your armpit over the seat and reaching down your hand.  Your middle finger should be right square at the center of the crank.  The other lesson was how to temporarily fix a broken spoke with Fiberfix Spoke.  This amazing piece of kevlar cord is used to provide tension on a wheel so that you can travel to the next bike shop to get the spoke repaired.  Kevin was gushing over this and I was, too.

I also enjoyed seeing how Pete packed his bike for a tour.  It was good to see how little he packed for a long excursion.  The highlight I took away from this was that I needed a smaller sleeping pad, which I’ve already come to the conclusion after 2 nights of restless sleep. I also learned that dry sacks are essential to keeping my possessions dry. 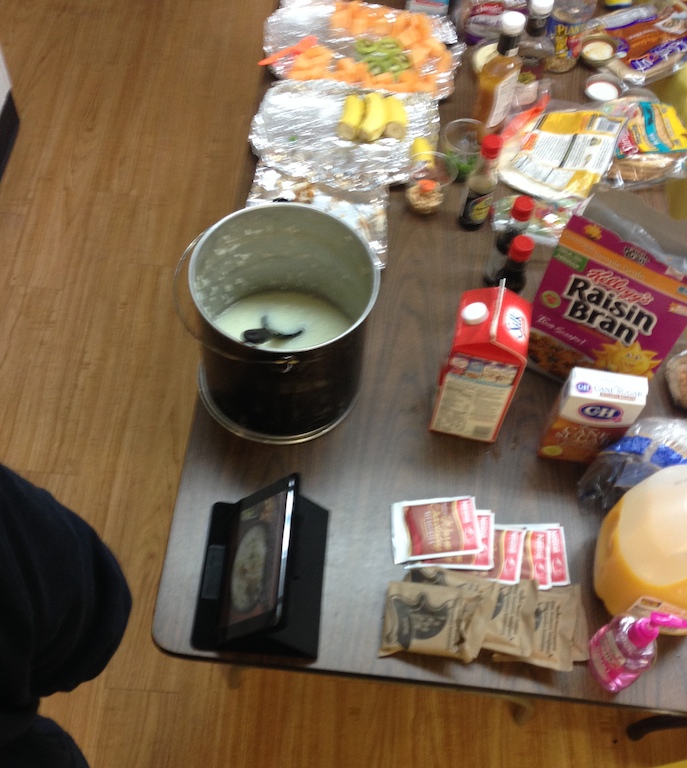 Here’s my congee / jook with the iPad.

The conclusion of the third day was spent at the supermarket shopping for my breakfast meal.  My partner, Margie, decided that we make porridge / congee / jook for breakfast.  This was a creative effort in hopes to win the cooking contest.  We bought jasmine rice, rotisserie chicken, peanuts, onions, and ginger.  We also combined our finances with the other team for a cooperative lunch spread.  This worked out very well as we came in under budget.  Margie and I celebrated by taking a short bike ride up Ballard Canyon Road and back.  It was breathtaking up in the hills and so much fun to ride and chat with Margie.  We talked about family and our struggles in life.  That is probably one of my favorite memories from the training.

Dinner was delicious as my cooking team made a very good chili.  I had seconds and maybe a little bit of thirds.  The evening was topped off with ice cream and a mini talent show.  Unfortunately, I had nothing to offer, but our group had several talented individuals who made us burst into laughter and sung us to awe.  It was a great way to end the night.

The fourth day started with breakfast preparation at 5:45AM.  It was controlled chaos as problem after problem was presented to us.  Luckily, we pulled it off just in time for our 7AM deadline.  Part of our presentation included the use of my iPad to show our guests what Congee / Jook was.  This was a nice high-tech approach in presenting our breakfast.  I had to admit, it was a decent meal and my mom would have been proud.  After breakfast, we immediately broke off to our smaller groups to do more role playing.  I volunteered first as I was on my breakfast preparation high!  Again, the exercise was helpful and fun.

We met one last time as a big group and reviewed what we learned.  Lynn also revealed the winners of the cooking contest.  Unfortunately, we did not win.  I was okay with that.  I’m glad we took the risk to make what we made.  It may not have been good for that situation, but at least I didn’t shy away from the challenge.  We were all given cleaning assignments after our bike ride while Lynn and the advisors worked on crafting our one-on-one review. 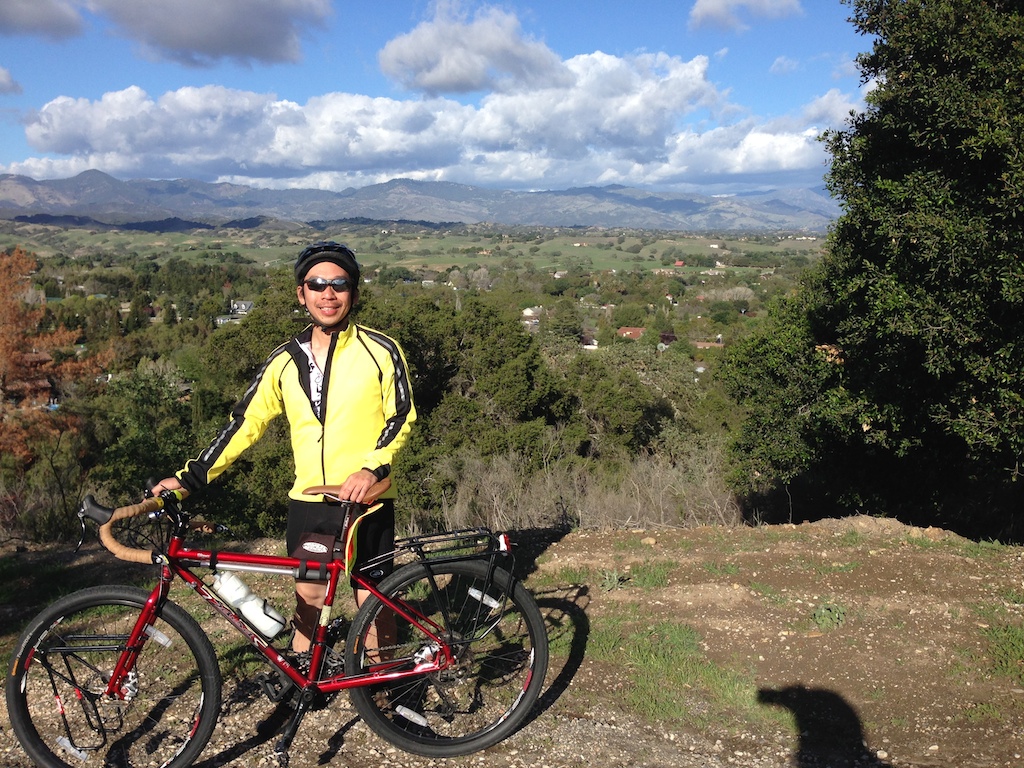 Me on top of Ballard Canyon Rd.

Our last bike ride took us on this great 28.1 mile loop around Solvang.  We got to ride Ballard Canyon Road once more and through several vineyards and horse ranches.  The wine country was so beautiful and majestic.  We got back a little after 2:30PM and saw that several people were packed up and had begun their reviews.  I helped clean the clubhouse by sweeping the floors.  We also snacked on the remaining food that was left.  One by one, each person was called to talk to their advisors.  I was the last one in my group since I was staying the night.  My review went very well.  I was told I needed to go on a self-supported tour as a participant at least once.  I have experience in touring by myself, but they wanted to make sure I had the opportunity to tour with a group of people.  Other than that, I should be a desirable tour leader for future tours.

About half of our camp left town that final day and those who remained decided to grab dinner at a local diner.  It was bittersweet to bond some more, knowing that I was going to be gone before anybody woke up the next day.  I got up at 4:45AM on April 4, 2014.  It took me an hour to put everything away and pack it all on the bike again.  I rolled out of camp by 5:43AM.  The ride was lonely and dark.  Fog settled in as I rode westward on the 246 to Surf, California.  It was chilly, but I made good time and got to the train station with 20 minutes to spare.  If this is an indicator of what’s to come in my life, I can’t wait to get started.