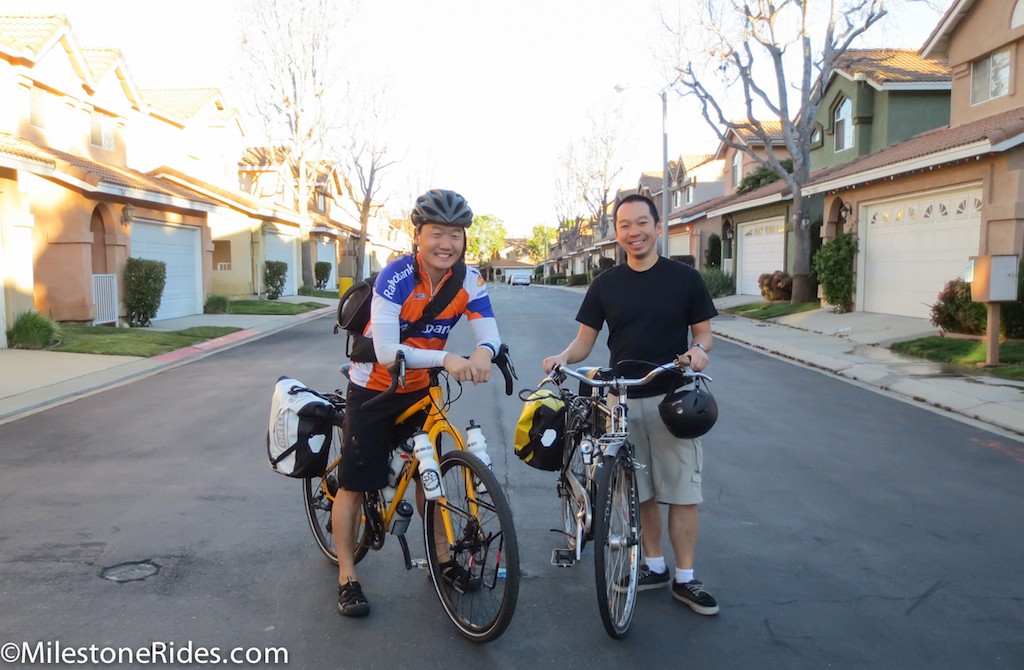 A couple week’s ago, our friends over at Path Less Pedaled put out a challenge. The idea is to go on a bike tour every month in 2015. Since I’ll be on the road for at least ¼ of the year, I was eager to oblige. Seeing that January was coming to an end and my brother-in-law has been itching to go on a bike tour, I decided that we would make it happen and do a quick overnight trip on January 25th and 26th.

The problem is my touring bike is currently undergoing some upgrades (to be revealed in the near future), so I couldn’t ride it on this trip. The only logical thing to do was take my Surly Cross Check, the one that I am in the process of selling. I was a little concerned as the bike’s gear is a Shimano Alfine 8-Speed Internal Gearing Hub, and it was built up to be more of a commuting city bike. I was afraid I didn’t have the range to spin up the mountains. Seeing that I didn’t have any other options at the time, I made the call and packed the bike with my 2 Ortlieb panniers for the adventure.

We left Chino Hills at 9AM and continued to ride North towards San Dimas through Pomona. The route was a steady ascent up to the foothills. We made good time as we reached the Pomona Fairgrounds in 1 hour. Another hour passed, and we were in Azusa. While passing through Glendora, we stopped at the world-famous Donut Man donut shop. We indulged in an apple-filled donut. Such a delicious treat. We actually went back to buy more on our way back the next day, but I’m jumping ahead. 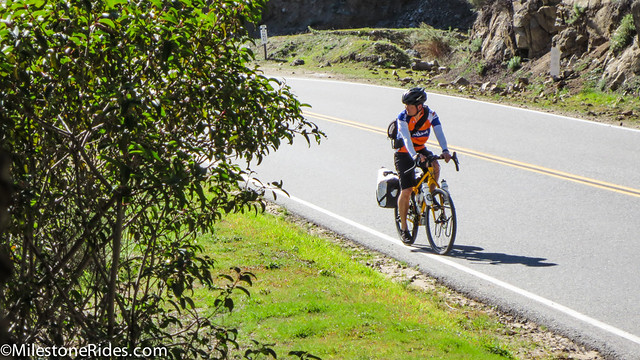 Earlier Than We Thought

In Azusa, we both picked up 2 foot long Subway sandwiches each: 1 for lunch and the other for dinner. We weren’t hungry after the donut, and it was only 10AM so we just decided to start the 20 mile climb up to our campsite in Cogswell Dam.

The climb was steady as we scaled 1800 feet in about 4 hours. We took a break half-way through to enjoy our lunches as we watched streams of road cyclists, motorcyclists, and lifted trucks snake through the narrow canyon roads. We were actually surprised that nobody harassed us or even honked at us. I suppose they’re used to seeing bicyclists on the road, so it wasn’t much of an issue.

Most of the lifted trucks ended up in a queue into the San Gabriel Canyon OHV area as we slowly passed them. We continued for another mile before turning off the road towards the entrance to Cogswell Dam.

Cogswell Dam was built to serve as flood control in conjunction with the San Gabriel and Morris Dam. We actually never made it up to the dam as the 7 mile car-free bike path took us into our home for the night, Glenn Campgrounds. The campgrounds were clean and right next to the stream. Nothing like having that sound to lull you into a sweet slumber. When we got there, there were groups of people hiking out of the site on the paved path. We assume they were making their way back to their cars to conclude their weekend.

At camp, there were 2 guys at separate campsites. One of them eventually left with his electric bike, the other guy looked like he was there for a few days with his hammock and fishing poles. We made it to camp around 2:30PM, so we had a lot of time to kill until bed time. We laid out the tarp, sleeping pad, and sleeping bag. I was a little worried as gray clouds started to hover above us. The forecast called for rain the following day, but we hoped it wouldn’t come early. 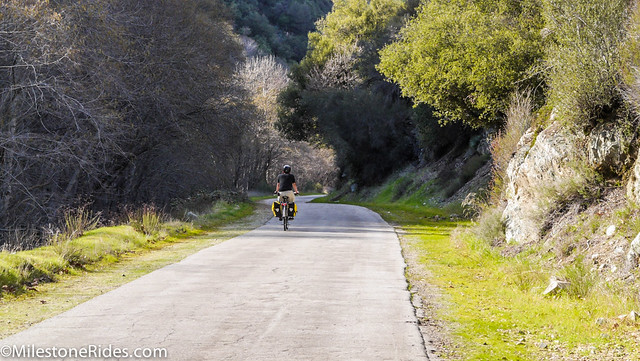 One of the main concerns we had was running out of water. So for the rest of the night, we conserved as much water as possible. We even tried to boil the stream’s water, but after seeing floating sediments and a layer of film on the water, we decided against it. It wasn’t like we didn’t have any water, just enough to get us out of the mountains the next morning.

The trail in and out of the campsite and dam was great! We were surrounded by cliffs of rocks and trees. The journey back to the main road was primarily a downhill cruise. We would stop from time to time to help a frozen salamander cross the road and avoid becoming road kill. Once on the main highway, we had about 3 short climbs before we enjoyed the long downhill back into civilization. 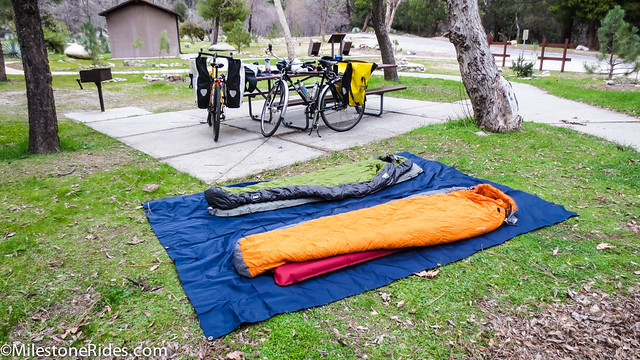 We enjoyed a breakfast at a popular restaurant called Flappy Jacks on Route 66 in Glendora before we rolled back to Chino Hills. This was probably the most relaxing trip that I’ve taken. It was the perfect amount of challenge and minimalism. Neither one of us brought a change of clothing and packed exactly what we needed to make it through the night. We could have left the stoves at home since we didn’t use it. If we had more water, we would have been enjoying delicious mashed potatoes in camp.

How did the bike hold up? It did just fine. Although at the lowest gear, there was a bit of struggle. An out-of-shape rider would probably be challenged to complete the same ride. I was okay, even though I haven’t been on a bike for almost a month now. The thing that hurt the most for the both of us was our butts. Being away from the saddle tenderizes your rear end. Only remedy is having more saddle time. Both Sang Hyun and I needed a trip like this to recharge ourselves both spiritually and physically. It felt good to be on the road again. I look forward to next month as I’ll be leading another overnight tour from Ventura to Ojai for my MeetUp. Join us here.

To be inspired, follow the #BikeTourR12 hashtag in your favorite social media platform or the Flickr pool.