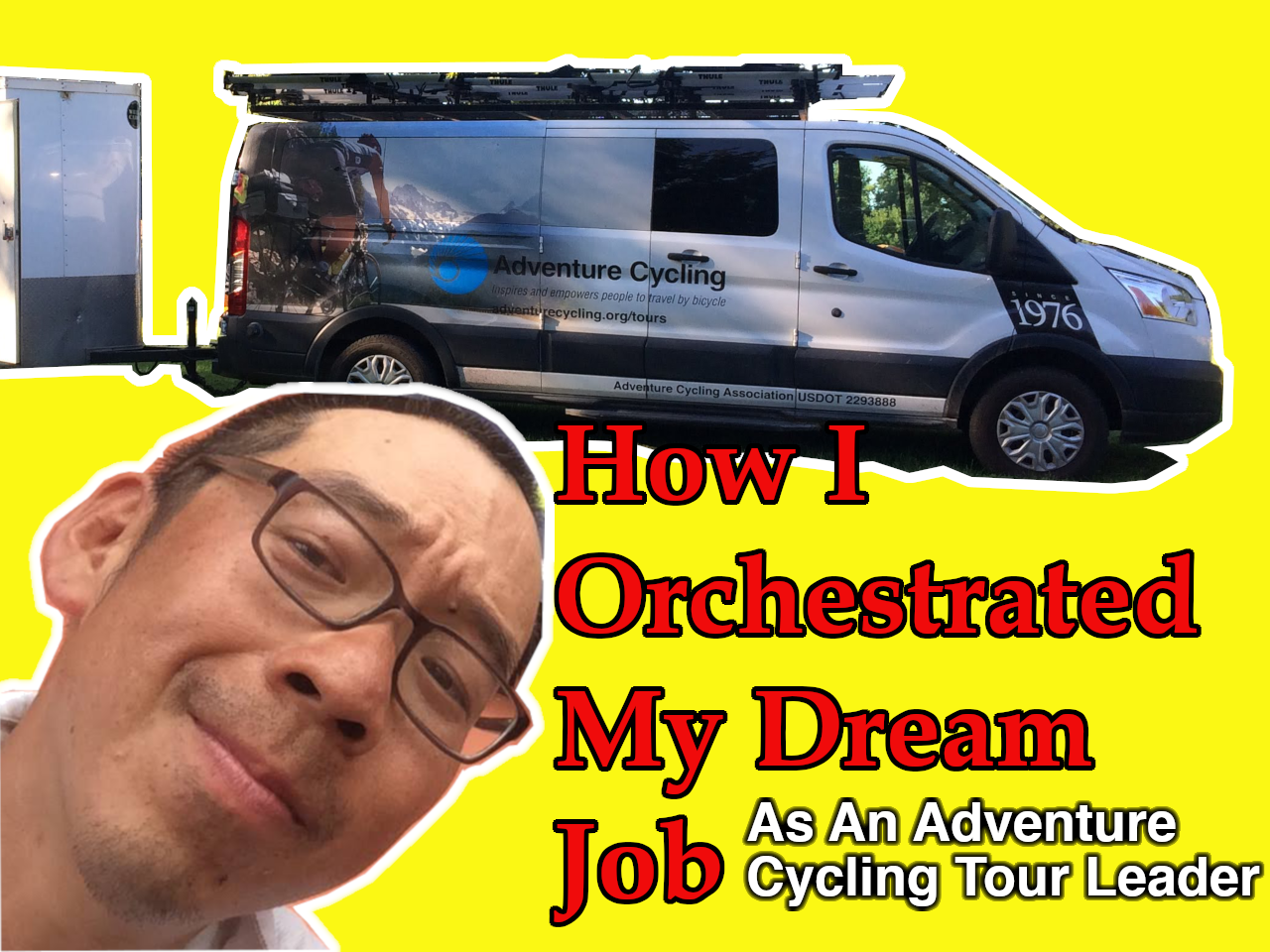 We flashback to September, 2013. I had gone through about 5 months worth of weekly sessions with my therapist. I had done 3 things that had huge implications to my future well-being.

The first thing I did was decide to sell my brand new Lexus in exchange for a car that “fits” my lifestyle, a 2011 Honda Fit. It was almost like a symbol to foreshadow the changes that were about to happen that’d launch me from my former life into my new life. From luxury to practicality. From a salary-focused life to an experience-focused one.

The last thing that finally tipped my life forward was starting this blog. I wanted to be able to capture my experiences and learnings on a platform that can easily be updated and shared with everyone on the Internet.

I would be remiss if I didn’t mention that I did some homework, and through it, I discovered a few individuals who blazed the trail of inspiration.

People, like Russ & Laura of the Path Less Pedaled, inspired me. They left Long Beach, California to ride across the country on the Southern Tier, and then rode across New Zealand on folding bikes called Bromptons. Soon after, they settled in the Portland, Oregon area before now living in Missoula, Montana. Their writings and inspiring content resonated with me deeply.

I also found 2 other bicycle tourists that had sparked my interests further. The first was Victoria Merriman (affiliate link to her book), who I discovered in 2011, when a co-worker at the time, told me that she was in the middle of a cross-country solo bike tour from Boston, Massachusetts to Santa Monica, California. He gave me the link to her blog and I read the entire blog up to the point of when she was in Arizona. I was fortunate enough to have met her on the day she reached Santa Monica.

Then there was a pair of men, Carlos Ureta and Joseph Philipson, from Hawaii who decided to ride across the country from the east coast to west. They did a great job of getting sponsors and documented their entire journey on their blog and through photographs. I followed them with much anticipation until they finished their ride.

With inspiration for days, one of the first things I decided to do was learn more about the industry and attend a tradeshow or conference where like-minded individuals would be.

That was something I’ve learned earlier on in my career, to find people who were already doing your job and ask them all the hard hitting questions.

That was why I decided to attend my first Bicycle Touring Network conference in Iowa in 2013. I’ve documented this experience in the following blog posts [Day 1 | Day 2 | Day 3 | Day 4].

At the conference, I had the opportunity to meet so many people who pointed me in the right  direction to pursuing this new career in bicycle tourism.

What became clear to me were 3 things that I would like to share with you that propelled me forward to realizing my dream job of becoming an Adventure Cycling Association tour leader.

The formula that I use consists of 3 things: skills, money, and time.

Having a strategy or being able to formulate a strategy was very important in my pursuit of my dream job.

I had a goal towards my dream job, but I needed to formulate a plan to get there. That’s where thinking strategically came in.

Going into the Bicycle Touring Network conference, I had to be open-minded and be willing to step out of my comfort zone to meet as many people as possible and tell them my story.

It was through these interactions, I was able to gain knowledge on what my next steps were.

The plan was to go on a bike tour of my own, pay for Adventure Cycling Association’s Leadership Training Course, and get my League of American Bicyclists League Certified Instructor accreditation.

As with any skills, you need to actually do the work or be trained to do the work. There’s no shortcut around that. Once I knew what I needed to do, I had a strategic plan of how to take it on.

The main skill that helped me thrive was my ability to communicate. I pride myself in being able to communicate effectively in person, as well as through writing. This was an absolutely crucial skill as a project manager, to be able to communicate clearly and concisely, so that you are able to give out directions and receive requirements from clients.

My communication skill was in the forefront when I went to the Bicycle Touring Network conference in Iowa. I networked with many people who gave me tips on taking the next step. I met Adventure Cycling Association leaders who told me exactly what I needed to do. I apparently left such a good impression that they remembered me when it finally came time for me to ask for opportunities.

I can’t over emphasize how important communication is for someone starting out as this is a world of WHO you know and not WHAT you know. The WHO will get you in and your WHAT will keep you there.

Have a Learning Mindset

I learned early on that you just don’t stop learning when you’re out of school. When I was working full-time, I was always learning at home.

I had so many side hobbies and passions I was pursuing outside of work. It wasn’t until later that I realized that this unrest was just me figuring out my calling for life.

I wasn’t fulfilled with a steady job working in technology, which was once a passion but had now become a mundane job. I was learning to do other things, like working on bicycles so I can be self-sufficient if I broke down in the middle of the road.

To have the learner’s mindset is key to staying humble, which helped me grow immensely into a role that I am finding fulfillment in.

I am constantly learning everyday and always look to challenge myself if I feel stuck. That is the learning mindset. To constantly look for things to learn.

When I talk about flexibility, I mean having the self-awareness to keep my own personal biases out of the way. This is important because being flexible allows me to see things from various angles.

One can say that becoming an LCI really didn’t have any direct correlations to my pursuit as a bicycle tour leader. But because I was flexible with this opportunity, it gave me another way to earn a living while I am not on the road. It made me realize that I enjoyed teaching people about bike safety and be part of the solution of educating people.

The way I see it, the more educated people ride their bikes > more bikes on the road > more demand for better infrastructure > less reliance on fossil fuel > reduced congestion > reduce fatalities > more clean air. You get the point. It’s like a butterfly effect where if I can reach out to 1 person and turn them on to bicycling, it may cause a shift in the culture.

That is why being flexible and doing things that may not make much sense, but could potentially lead to other opportunities is key to my own dream job.

The first thing I had on my side was that I had a considerable amount of money saved.

Even though I had a mortgage to pay and several retirement accounts to fund, I was able to tap into some savings to help me take care of living expenses at the time.

This was one of the reasons why I sold my Lexus, to get rid of a car payment and buy a car that was fully paid off and was practical in use.

I eventually freed some more of my capital and expenses by selling my house in 2014 after I came home from my Pacific Coast bike tour. I knew I had to get rid of that property because it no longer made sense to occupy a home that big by myself. The mortgage felt like a prison sentence, which kept me from leaving and living the nomadic lifestyle I was yearning for.

Without a house, I no longer had to worry about insurance, monthly bills, or H.O.A. payments.

I basically sold everything I had in my house and dialed everything down to a few plastic bins. That meant I had to sell off all my furniture and anything that didn’t serve me immediately.

My mindset was to adapt a lifestyle of minimalism where I only own things that I truly need and got rid of things I didn’t. That meant selling my big screen televisions and all my furniture, including a couch that took me 2 years to purchase and a set of brand new bedroom furniture I had bought a few years prior.

Those were some hard decisions and looking back to that moment in time, it was absolutely necessary for me to get to where I am today.

Today, I do have things that are necessary, but there are definitely things I’ve added since that I would categorize as “nice to have” but not necessary. For the most part, it has helped me keep my costs down as I build towards my dream job.

The last piece of the formula is time. Time is probably the most underrated and yet most crucial part of this formula.

It is a non-renewable resource which when wasted, can never be granted back.

I realized this early on as I was planning my first tour along the Pacific Coast. I knew I needed to put in the time to go on tours before I can help lead others on tours. So when I finally did finish the tour, I was ready.

Adventure Cycling gave me the opportunities to help build my skill set up. I was given opportunities after opportunities until I have reached the pinnacle of my dream job where I am rewarded with travel that I had only dreamed of just a few years ago.

Tours like Route 66, the Northern Tier, and Puerto Rico is now on my completed or to be completed list.

I am so grateful that I put in the time to acquire the skills and be the best that I can be in order to get me to this point.

You can’t speed up time. You just have to go after it when the opportunity presents itself. It will be scary. It will feel like you’re not ready, but time will only tell.

Use time to help create your dream. Do things that will help you get to your dream job whether it is bike touring or not.

As a result of me applying the formula, I accomplished the following things.

To help you understand what happened between 2013 and 2018, here is a general timeline.

I am forever grateful to be able to discover my dream job and have taken all the right steps to achieving it.

Of course, however lucky I may be, if I hadn’t been aware of my opportunities and taken action, would I be in this same fortunate predicament? Probably not.

I think the last piece of all of this is to take massive action. Be willing to get out of the comfort zone and be uncomfortable. Only good things have happened when I’ve done this and I truly believe that this was the secret sauce that kept my progress moving forward.

Let me know what you think about this blog post in the comments below. Hopefully, this will provide you with some insights on what I did to get to where I am right now and offer ideas for your own road map to your dream job.