5 Bike Touring Gear That Changed My Life In 2018 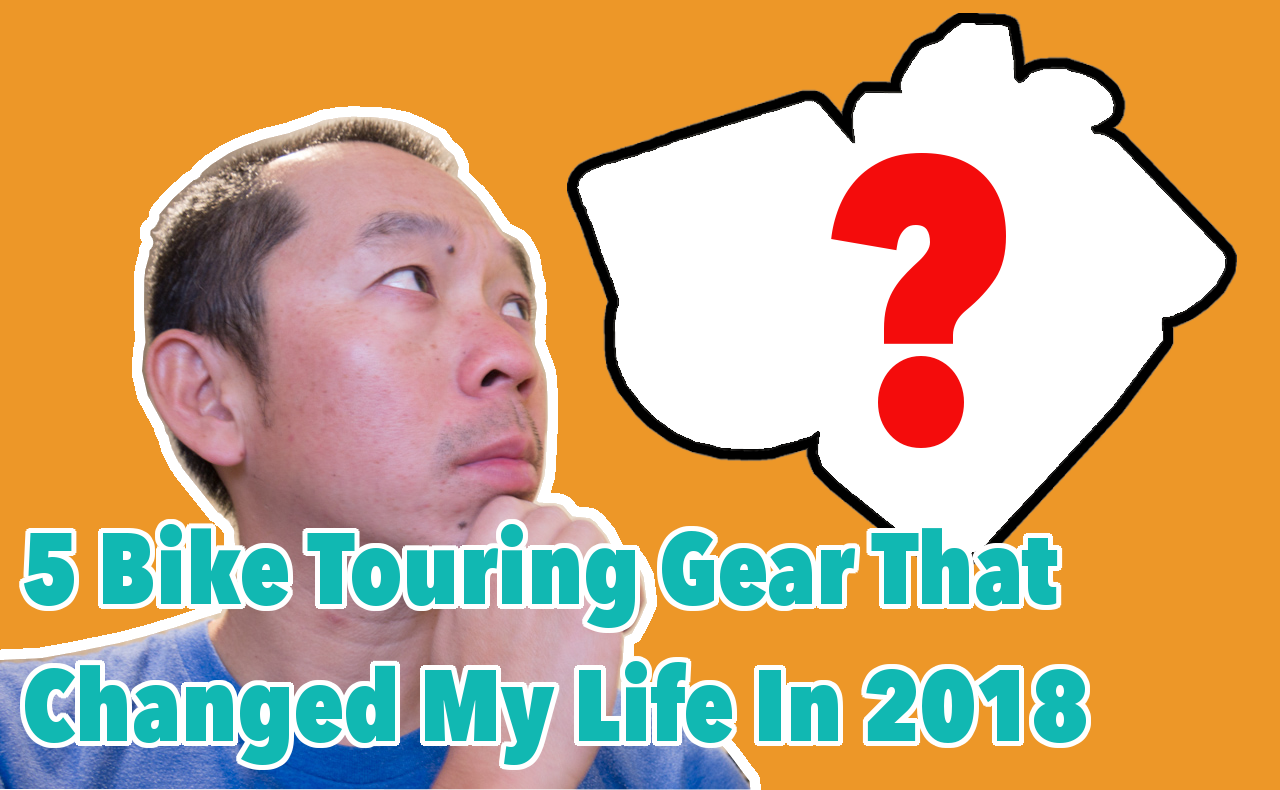 With every tour that I do, I am constantly evaluating the different gear that I bring. I like to bounce my ideas around with other bicycle tourists to see how they do things versus how I do things. This mutually beneficial exercise has yielded some gems in both directions.

That’s why I decided to share with you the 5 things that I added to my setup in 2018 that completely changed the way I bike tour. Many of these additions are not absolutely necessary and many of these things you may already carry with you.

This is just a revelation that I discovered last year that has made a lasting impression on me, and I will incorporate in all my bike tours moving forward.

Even though I had 2 tours in 2018, the Baldy Bruiser and Route 66, most of my gear were used and added on Route 66. So without further adieu, here are the 5 things that I added, which completely changed my life on the bike.

You might be thinking to yourself, “That’s obvious!,” but I try not to carry too many battery packs when I go on my trips. In fact, I’ve made a video about keeping your electronics charged which details the different strategies to keep your equipment charged.

There’s something very comforting in knowing that you have enough power to charge up all your devices everyday. In scenarios where we didn’t have ways to plug-in, it was great because I had the spare battery that I would rotate in once the first one ran out of electricity.

Being able to rotate each battery pack gives me peace of mind that I’ll always have more if needed. It wasn’t necessary for me to charge the batteries every single day, which was fantastic. Having that peace of mind made the days go by with a lot less stress.

The added weight seemed negligible, but of course, I wasn’t self supported. I would recommend that you find a battery pack that can recharge using a USB connection rather than a dedicated wall port. This way you don’t need to bring a dedicated plug for the pack. You just reuse a USB from another device. It was annoying to have a separate plug that was only required to charge my TrendNet battery. I believe they swapped this out for a USB connection in their newer model.

One of the annoying things about riding your bike across any country is that you will definitely run into dogs. They’re mostly harmless, but you just don’t want them to cross your path in any way. One of our riders actually fell off his bike because a dog clipped his front wheel when he tried to avoid another.

I was given this tip by Patrick Tuttle, who had visited our campsite when we were in Carthage, Missouri. In addition to free Route 66 t-shirt, postcards and patches, he gave me one of the best advice to deal with free-roaming dogs.

He said what really works is a cheap $7 boating air horn from Walmart. He explained that certain pepper spray are not a great idea because you have to be able to aim at the dog while riding your bike with one hand. What if there are multiple ones?

Pepper spraying a dog seems a little cruel, especially since they are just doing what they do instinctively.

I used to squirt dogs in the face with my water bottle, which was rather effective on my Southern Tier tour. Then I realized that with every squirt, I was losing valuable water on a hot day. I also noticed dogs didn’t get deterred by the spritz on hot days. THEY WELCOME IT!

Using an air horn was the most effective and humane way to deal with dogs on the bike.

So when I was in Joplin, Missouri, the next town over, I went to the neighborhood Walmart and picked up my own air horn in the fishing / boating section of the store.

I tied a paracord to it and attached it to my handlebar bag and stuck it on the side of my Revelate feeder bag for quick access. This setup worked beautifully as I had 2 separate instances where the dog was charging towards me and with a quick blast, they retreated back home.

The air horn is small and light, so it is very convenient to carry discreetly. Towards the end of the tour, they were harder to find as the summer season was wrapping up.

I am planning to have mine with me on all my tours now. It may come in handy, not only for dogs, but other wild animals, too, or even for an emergency alarm.

I may actually pick up a refillable system later as it makes a lot more sense than to  continuously purchase the one-time use kind.

By the way, make sure you point it away from you when deployed. I made that mistake and my ear was ringing for a day.

Check out Patrick’s guest post on Adventure Cycling about this same topic.

Pick one up on Amazon here (affiliate link).

After my Southern Tier tour, many of my videos that I recorded on my GoPro Hero 4 camera were unusable or was so choppy that they caused nausea and headaches. This was in contrast to Sang’s (my brother-in-law) footage on his DJI Osmo, which was so smooth and pleasant to watch.

I decided I needed to have my own solution if I want to really capture the moment without causing health concerns to my audience.

I picked up a EVO SS 3 Axis Gimbal (affiliate link) to take on my Route 66 tour. Without going into details about the gimbal since I’m planning to do an in-depth review of the gimbal later, it was annoying to ride with because of the added weight, but the footage made the annoyance well worth it.

Look at my recent video of me bombing down the Cajon Pass versus some videos of me riding on the Southern Tier. I am really happy with the quality of the footage with the gimbal.

Besides the added weight, having to manage more batteries can be annoying. Luckily, their charger was micro-USB compatible so I was able to reuse what I already had.

Hopefully this is a start of something good with future cameras, having image stabilization so that we don’t have to buy extra hardware like a gimbal to compensate.

When I was leading the Colorado Hill Country tour with Adventure Cycling in 2017, my tour leader partner had 2 phones with him.

He had a primary phone that did all the GPS navigation, maps, personal calls, etc. and the other one was a beat up Android phone for all his podcasts, audio books, and music collection.

The justification is that it saves battery compared to having everything on 1 device. Another reason was if the beat up Android phone was dropped or exposed to outside elements, it wouldn’t be a problem as this was an older phone that served primarily as the entertainment work horse.

I thought that was such a great idea that I went and solicited a couple of free Android phones from my friends. I got a Samsung Galaxy S3. The battery was replaced immediately, and I picked up a 64GB micro SD card for storage.

I threw my entire collection of music on there along with some favorite audiobooks. I downloaded a few apps that gave me access to podcasts.

I now have a complete dedicated entertainment system at my disposal. I also own an old iPod that housed my music collection, but the iPod does not have WiFi or Bluetooth capabilities, which is a problem because you’d need WiFi to download or update your podcast collections and Bluetooth to play out of portable speakers.

I say an iPod Touch could work but being able to expand your memory by swapping out the memory card is a must since you can’t change storage capacity on the iPod Touch.

I would use this Android device exclusively on the bike on speaker mode in my feeder bag. It provided hours of entertainment during the mundane stretches of riding. It was not until I picked up the next thing that 10x the experience.

My pal and partner, Jared, on Route 66 had been riding with a bluetooth speaker for a few years now and he raves about it all the time.

I’ve dismissed it in the past telling him that I enjoy riding in silence. That’s still the truth, but to be able to change your mood and keep you motivated on a ride, having music or some piece of content has been a game changer.

So when I saw that the exact same speaker that Jared had was on sale at Target, I sprung for it. I picked up a JBL Clip 3 (affiliate link). This little thing is incredible! Again, I’m not going to dive into as I know I’m going to do a future review of it, but this speaker is plenty loud, has a built-in carabiner clip for easy clip anywhere, incredible battery life and is waterproof. It’s easy to set up, and I use it all the time outside of bike touring.

I’ve never ridden with earplugs as I feel that you aren’t aware of your surroundings as much, so having a portable speaker is a good compromise of being able to hear auxiliary sounds (like dogs running after you or an electric car creeping up on you).

My JBL Clip 3 will definitely be a staple on all my bike tours whether I use it or not. I enjoy being on the bike a lot more now with it.

Can you see why these things are so great to have on a bike tour? I mean you can get away without having any of them, but being on the road for as long as I have, having some comfort items like these can change the trajectory of your trip or your day real quick.

Do you have anything you’ve recently added to your bike touring gear that will now be included in all your travels? I’d love to hear about them in the comments below. This way you can help me broaden my horizon.