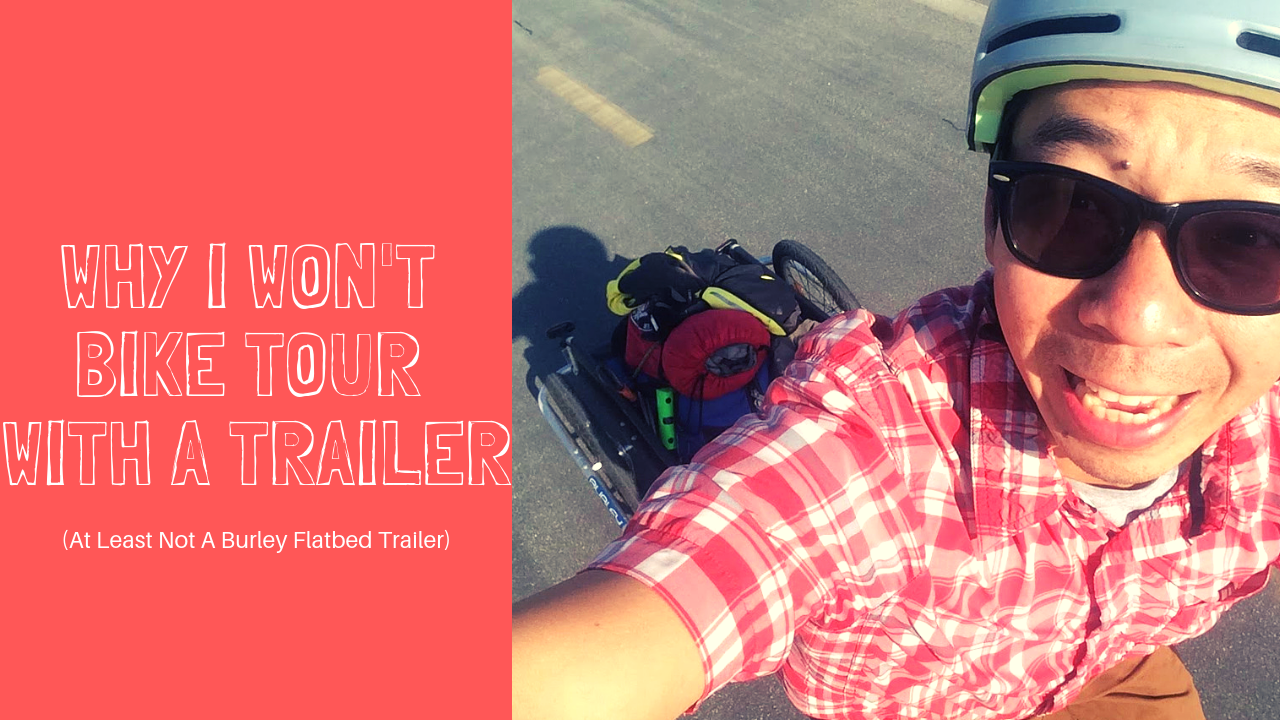 If you have kids or pets and you love biking, you should be very aware of Burley trailers. These are the de facto accessory to haul your babies and fur babies on your bike rides. There’s a thin nylon cover to shield them from the elements and some mesh windows for ventilation.

Since I don’t have a pet or a kid, my assessment in this post is for a Burley Flatbed trailer. This one does not come with any cover or seats. It has a thin plastic bottom capable of holding 100 lbs of cargo and weighs in at 14 lbs. This was specifically designed for those who just want to haul things on their bike without the need to buy panniers or saddle bags.

How I Got One

I borrowed one from a friend who was not using it. The idea was to see if this would be a good thing to have to carry odd shaped items, like a couple of 5-gallon water jugs. One of my many chores in the house is to fetch water at a water store using these bottles, and I wanted to see if I can do this without using my car.

Naturally, my next thought was to see if I would be able to use it for a bike tour or not. I know many people have used them in the past and have told me that they’ve traveled with theirs since they are riding a road bike or a bike that doesn’t have mount points for racks in order to allow them to carry panniers.

But Does It Bike Tour?

When the opportunity came where our local commuter train line, the Metrolink, was running a promotion for 2 free 1-way tickets anywhere along their Orange County line, my friends decided to do a quick overnight ride to visit Crystal Cove State Park along the coast of Newport Beach.

On December 22nd, 5 of us decided to meet at Los Angeles Union Station to catch the Metrolink to Anaheim. The first obstacle for me was getting to Union Station from Pasadena as I spent the night at a friend’s house after a party and figured it would be easier for me to ride from there and take the early train out the next morning.

I decided to use my cross bike, a Bianchi Cross Concept, which is a scandium frame with carbon forks, seat stay, and chain stay. This frame did not have any mounting points, so it was a realistic test case for the trailer. I quickly attached the trailer hitch onto the rear wheel by removing the quick release and inserted the hitch directly onto the skewer and back into the rear hub of the bike; then, I just tightened it back up again. Next, I attached the trailer directly to the hitch and was done in 5 minutes. It’s much easier than I ever thought it would be.

Packing for the trailer was also very easy. You just have to pick bags, like a duffle bag or any travel luggage, fill it up with your stuff, and strap it onto the bed of the trailer with bungee cords, and you were off to the races. I separated my bag with multiple bags so I can organize it better. I even brought along other accessories, like a camping chair with me.

The trailer made it very easy for me to add anything as long as it was securely strapped down to the trailer. This was much nicer than having to carefully plan out how to pack my panniers, in which I would need to consider the frequency of usage of my stuff, organization of my gear so I know where to find it when I need it and weight distribution for a balanced ride. With the trailer, none of that was a forethought.

This made things easy for me to shop when I had to buy food for dinner and breakfast in camp. Usually, that becomes an exercise of Tetris where I have to try to shift items around to make room for more food. With the trailer, it was just another thing I threw into a large bag or strapped it down with the bungee cord. In fact, I was able to offer my services to carry other people’s food since they ran out of space in their bags.

I didn’t have to put any effort into maintaining the speed of the bike and trailer. It did hit me like a brick wall when I had to start climbing up hills. Nothing so bad that I would have to push it up by foot. I always seem to manage to be able to ride up any hill that was thrown at me. I think the worst was about a 6-8% climb in the Laguna Beach area.

Of course, this created a paradox when I’m packing. Knowing I can pack more things, I tended to bring more than I should carry. I would say you should bring exactly what you would carry on your trips without the panniers. It should all fit well and possibly have room for food.

Why I Can’t Do It

I would have to look back from time-to-time to make sure that I was staying within my lane by moving my bike off center. The benefit of this was that it created safer passing from cars because part of the trailer was jutting out and cars passed us by with a wider buffer.

With a wider load, you have to be aware of how you cut your corners. For places like protected bike paths, you can’t sneak your bike and trailer by as easily as when you weren’t pulling a trailer. You have to be cognizant of where your wheels are on the trailer. You may end up smashing it against a gate or a curb causing some potential structural damage to the trailer.

The worst thing about using a trailer for bike touring is utilizing other modes of transportation to help extend your trip can be very cumbersome. For example, getting to Union Station from Pasadena in the morning was a scramble getting on and off the trains. I had to get onto the light rail, detach the trailer, stand the trailer up to lean it next to the bike and stand there the whole time to make sure both items didn’t topple over.

Then, when I had to get off at Union, I worked out a plan where my friend was going to go out first and come back in to hold the door while I brought my bike out of the train first and then run back into the train to lift my trailer and gear out. All in the meanwhile, people were rushing in and out of the train.

Luckily, there weren’t a lot of people so I was able to do that a lot faster than I had anticipated. If you are jumping on a packed train, good luck getting both bike and trailer through the crowd.

This same sequence was also applied to getting on the Metrolink. The only difference is that the Metrolink was a bigger train with fewer riders on the weekend, so it gave me plenty of space to place things while I made my mad scramble in and out of the train.

For that reason alone, I would recommend against a trailer setup. I could imagine this being an issue even if my trailer configuration was just a one wheel version, like the BOB trailers.

If you are just doing a loop starting at home, this wouldn’t be an issue. I think it makes perfect sense for that purpose where no motorized vehicles are involved. But once you need to add multi-modal travel, you’re going to have to think about your strategy around getting on and off. Luckily, the Burley Flatbed trailer can easily fold down flat with the wheels removed so it can be stowed away as checked in luggage under a bus or in a car trunk.

When Adventure Cycling Association made their rounds for Regional Gathering in January of this year, one of their stops was in Pasadena. I volunteered to pick up snacks and drinks for the gathering and was shopping for groups of 30+.

Naturally, I decided I was going to pair the Burley Flatbed trailer with my Raleigh e-bike for the trip up. I picked up a 24-pack water, 18 bottles of juices, 3 12-pack soda pop, 2 fruit and vegetable platters, chips, dip, nuts, chocolates, plates, and napkins for the gathering. It must have weighed close to 100 lbs and I was going to ride uphill into Pasadena.

I was able to ride all the way up to the gathering without much issue. Going up some of the hills did require me to go into the Max speed settings on the e-bike, but I didn’t have to stay in it for very long.

I think using the trailer with an e-bike makes the most sense. Especially when you’re talking about getting stuff from big bulk stores like Costco or Sam’s Club. This would have been a great setup for when I use to live alone and needed to pick up a week or 2 worth of groceries. Having a trailer and an e-bike like this would have made things a breeze. Probably wouldn’t have been any different than having the Xtracycle longtail bike that I had built up. I definitely would have been less tired when I came home (I use to live on the side of a pretty significant hill in Burbank).

If only I had something like this back then.

As for carrying my 5-gallon water bottles, I haven’t tried it yet, but I bet it will work as long as I’m careful about keeping it from toppling over. I mean technically, if I just haul 2 at a time, I would still be under the 100 lb limit of the trailer. I guess I’ll need to try that soon!

To summarize, I would never consider bike touring with a Burley Flatbed trailer because of 2 reasons. 1. The width and your bike’s offset makes you wider than you are used to so it would potentially be a hazard as you have to consider how you enter or leave certain places like a protected bike path. 2. The hassle of detaching and attaching the trailer when you get on and off a train is too much for me. I often use the train to help extend my trips locally. I can’t even imagine the logistics of shipping or checking in your trailer on a plane.

But if it’s the only way to get out there and bike tour, it’s better than having nothing.

Do you or have you ever travel with a trailer like the Burley Flatbed? What are your thoughts around it? Is it something you enjoy or something you despise?

I would love to hear what your thoughts are. Let me know in the comments about your experience traveling with a trailer and if you have any tips to share, please do so as well.

Thank you for reading!