How To Bike Through Camp Pendleton After July 22, 2018 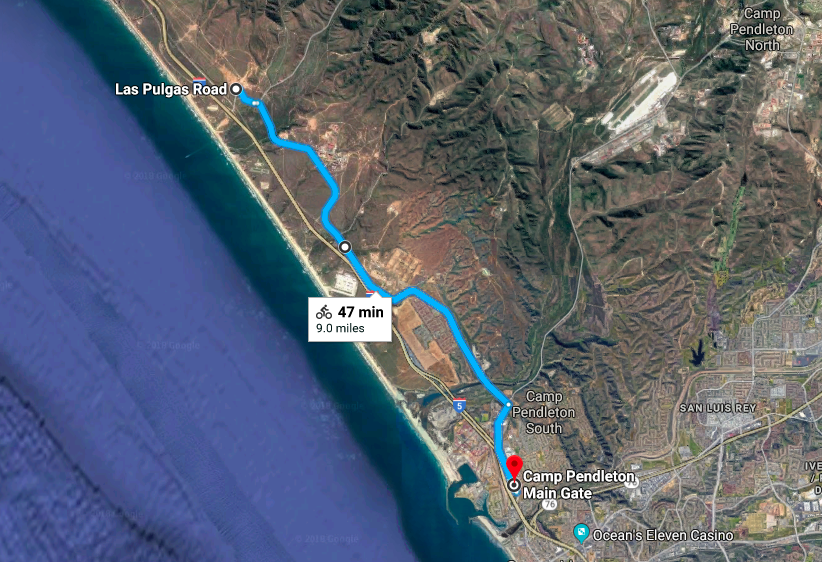 It was brought to my attention that the Camp Pendleton Marine Corp Base is requiring a more stringent security check through their Department of Defense Biometric Identification System (DBIDS) in order to enter their base. Previously, you were able to simply register online (see link below) and present your current driver’s license at the gate, and that gained you entry. There was even a time when they would just wave you through. Before I dive into my thoughts about this change, here’s what the email said.

To cyclists who transit Marine Corps Base Camp Pendleton,

Beginning October 1, 2018, all cyclists who wish to access the cycling route

Defense Biometric Identification System before they enter the base.

Camp Pendleton is currently transitioning from one base access system to

another. The old system will be used through September to give base visitors

time to register to DBIDS.  Cyclists who are currently accessing the base

via the old system will be able to continue to do so until September 30th.

New cyclists, or cyclists whose old registration expires will be required to

To register for a DBIDS bicycle pass, individuals will need to go to the

Main/Vandegrift Boulevard visitors center and are required to show an

check as well as having their photograph and fingerprint taken.

access; any attempt to enter the base in a motor vehicle with a bike pass

will be turned around.  Recreational cyclists may not sponsor another adult

cyclist.  Adult cyclists may be accompanied by minors for whom they are

MCB Camp Pendleton will continue to foster positive relationships with our

neighbors by allowing access to cyclists and we appreciate that most

cyclists have been good visitors during their time on the base.  We

come in as soon as possible to obtain their DBIDS ID.  We anticipate that

The new system will increase installation security and communications by

is scanned at an installation entry point.

On-line registration of recreational cyclists will end 22 July, 2018.  No

matter when you registered under the old system, that form of access to the

base will end on September 30.  After that date only a DBIDS bicycle pass

holder will be allowed aboard the base.

What Does This Mean For Bicycle Tourists?

As you can see, this puts the burden on those who are traveling up and down the Pacific Coast Route to actually come into their visitor’s center, provide proof of identification and submit to a background check along with being photographed and fingerprint.

It sounds to me like this will take some time for any interested cyclist to purposely travel to the visitor’s office and then spend at least an hour or so to be registered appropriately. Of course, the visitor center is located conveniently for people who are traveling northbound from San Diego at Vandergrift Blvd, but for folks who are traveling southbound (which is the majority), it sounds like you are not going to be able to register over at the Las Pulgas Road entrance on the day of arrival.

In my opinion, this was inevitable. To have a prominent military base like Camp Pendleton allow cyclists to travel through with just a simple registration form was just too easy and risky. No other active military base, that I am aware of, has even considered doing this.

What I Would Do

The question now is, if I was traveling through this area on a once-in-a-lifetime bike tour, would I go through the trouble of coming in to register? Probably not. I’d turn to the alternate route and brave it with the hundreds of cars on interstate 5 for about an hour (depending on how fast you ride). This is not ideal, but as a traveler, this makes the most sense.

For reference, here was the registration page that we used. https://mccscp.wufoo.com/forms/camp-pendleton-bike-route-access-form/.

What do you think about the change? Do you agree with Camp Pendleton’s decision? Do you think it’s a good idea to go in and register, or would you rather just hop on I-5?