How to Film a Bike Tour

23 May How to Film a Bike Tour

There have been more and more videos popping up on YouTube about bike touring on a daily basis if you haven’t already noticed it.

I believe this is a good thing. This allows us to share our experiences and document moments in our lives that may not be replicated again. Who knows, you might be on the cusp of making the next great biker movie!

Naturally, I thought it’d be a good idea to share with you how I document my bike tour so you can use some of these methods and strategies on your own video producing journey. Let’s jump into how one can film on a bike tour!

Sang brought along his own camera equipment so that we can share the duty of capturing footage on our journey. We would all agree that videos are best if you show a diversity of characters and perspectives in it.

When we talk about video production, we only talk about the primary equipment and forget that each piece of equipment requires accessories for it to run.

Each camera required at least 2 or more spare batteries, so that we always had enough power to record an event.

We also carried extra SD and micro SD cards in the event of running out of recording space for our videos. I would recommend always having an extra memory card at all times.

Don’t forget those mounts and cases for each camera. Some come with proprietary solutions while others live in our handlebar bags waiting for the right moment to be taken out and used.

I had to decide what type of equipment would be needed each day and switched between the helmet and chest mount of the GoPro on a daily basis.

My Apple MacBook Air only comes with a 250GB SSD drive. This was definitely not going to be enough to store all my applications and media files that we anticipated capturing, so we brought along a few hard drives as well.

Once we had all our media files loaded on the hard drive, we used the MacBook Air to begin the editing process. 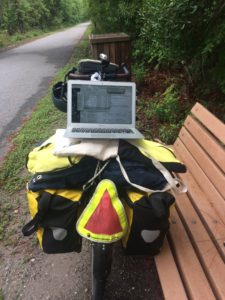 Apple included a very simple, but powerful video editing app called iMovie with all their computer systems. Many people think you need something more substantial like Final Cut Pro or Adobe Premiere to produce cinema quality videos, but I’ve been able to take advantage of iMovie to create pretty much all my videos on this channel.

Sang, on the other hand, uses Final Cut Pro for all his edits at home.

It’s all about the music

I spend the most time picking out a song for a video. We use to subscribe to a music service but have since opted for royalty free music from Soundcloud or the Audio Library – No Copyright Music channel. Many artists provide music under the Creative Commons license. The only caveat to using their music is you need to give credit to the artist.

I also support many artists using Patreon where I contribute a dollar or two for their efforts.

If you watched enough of my Southern Tier videos, you’ll notice that there’s a pattern.

Having a routine helps with capturing on a daily basis so that I know what I should be looking for. I don’t have to figure out how the flow of the video would be each time.

Of course, this can be boring and redundant if I do this over and over. So I vary it from time to time to make things interesting. For example, for Vlog 58, I did a 10-mile play-by-play video for the entire 90+ mile day. I received a lot of positive feedback for that video because it was much more interesting to watch.

Be sure to experiment with your own formula and see what you want. It’s a fine line between being creative and getting things done as quickly as possible on the road.

Getting videos filmed by bike may sound a bit daunting at first, but with a little bit of preparation and practice, I don’t see any reason for someone not to be able to tell their story.

Even though we have a surge of bike touring videos on the Internet these days, there is nobody like you. You have your own unique perspective and unique reaction to the things you experience. That is why it is important to capture these moments and share them. Besides, it’ll be something you’re glad to have done when you are progressing along the years down the road.

I get a bit of nostalgia when I recall one of my adventure bike videos from the past. I am always so glad that I took the time to capture the moment and feeling regretful for some moments we didn’t capture. Even the bad ones…

Please share this post if you find it helpful. Also, if you have a video channel, let me know in the comments below so I can check it out. I’m always looking for some unique perspective and am eager to learn about other people’s stories.