10 Things I Wished I Knew Before Riding The Southern Tier 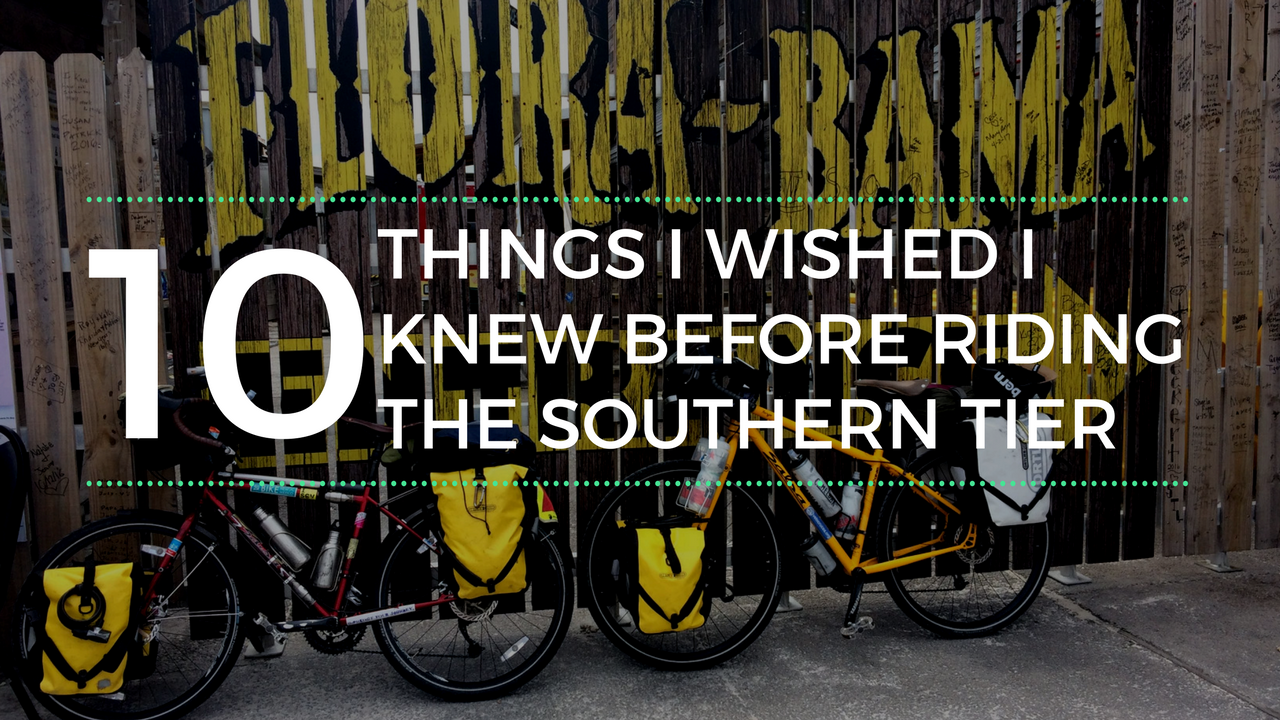 It is hard to believe, but one of the greatest riding endeavor that I have ever taken happened over a year ago. My brother-in-law, Sang Hyun, and I both set out on our cross country trip on March 23, 2017 from Chino Hills, California. We packed all our stuff in 4 panniers and a handlebar bag each and began our journey south to San Diego, where the Southern Tier Bicycle Route starts.

We were joined by our friend, Maria, in Oceanside. She had taken the train from Los Angeles so that she can ride with us all the way to Arizona.

This ride was something I had always wanted to do since I started getting back into biking in 2008. The goal was to ride across the country when we turned 40. I was 40 in 2016 and Sang Hyun turned 40 a month before our departure, hence the birth of the Tour de Forty.

Leaving at the end of March was a bit late in the season as we started to talk to other folks on the road, but it all worked out for us.

Along the way, we discovered many things I wish we had known ahead of time. I’d like to give those who are aspiring to ride the Southern Tier all the heads up and information that you may find useful as you are planning the same route.

The most challenging riding conditions of the entire trip were in the first 2 days. The first day, we left our friend’s house in La Jolla and rode down to Ocean Beach Park near Point Loma to dip our rear tire in the Pacific Ocean, and then we were sent off by friends and family towards Alpine.

With adrenaline coursing through our veins, we slowly made our way out of the urban areas and into the roads less traveled, paralleling Highway 8 into Alpine. It was humbling to go from sea-level at the ocean all the way near 2000 feet of elevation at the end of the day.

To make matters worse, we had to wild camp at the library in Alpine because all hotels and motels were booked as the result of the “Super Bloom” event nearby. So if you’re ever in Alpine, California, the public library on Alpine Blvd is available for a quick refuge if you can’t find a place to camp.

The next day of riding wasn’t any better.

We needed to make it over to Boulevard, California, which had us climbing another 2000 feet to 4000 feet for the first 15 miles. We were pretty much above 3000 feet for the remainder of the day.

I thought showing up to the campground without a reservation, like how we did it on the Pacific Coast, wasn’t going to an issue. Unfortunately, we were turned away at The Oaks at Sacred Rocks. This was after a rewarding few miles down. We ended up walking up into town to find a motel to stay in for the night.

Pro-tip: Be prepared for the first 2 days. It’s going to put your endurance and grit to the test. No shame in walking. Book places to stay ahead of time.

After the 2nd day, you’re going to get into some great riding in the desert. The roads into El Centro, California are rough with deep gashes in the asphalt, unless they fixed it (I highly doubt it).

Pro-tip: Be sure to stock up on water after you leave El Centro or Brawley. The remainder of the way only has 1 town with any supplies, and they know this fact and charge accordingly.

When you get to Apache Junction, Arizona, the current version of the Adventure Cycling Association maps have you going north on Highway 88 towards Theodore Roosevelt Lake. I recommend that you stay on that route.

Older maps have you going south on Highway 60 into the town of Superior, Arizona. There is a bridge leading into the tunnel called Queen Creek tunnel.

The road up to the tunnel is narrow, slopes upward and is constantly buzzing with high speed traffic. We opted for the frontage road next to the tunnel and avoided this stretch. The ride afterwards was terrible. Lots of climbing (up to 4500 feet) with no shoulders and constant cars buzzing by. You’ll eventually join the current route at the town of Globe, Arizona.

Pro-tip: DO NOT TAKE QUEEN CREEK TUNNEL unless you are staying in Superior the night before and leaving early in the afternoon.

It took us 28 days to ride across Texas, which was ⅓ of our trip. We went through so many different terrains and saw so much of Texas. Here are some things I’d like you to know about riding there.

The longest day of our ride was from Van Horn to Fort Davis. We clocked in at about 92 miles that day. There were no services once you get off the interstate and start riding into the mountains to the observatory.

This is the route found in current Adventure Cycling Association maps. Again, if you want to be challenged, follow the map.

Pro-tip: Take Highway 90 in Van Horn and make your way past the cool little town of Marfa. You’ll pick up the current route at the town of Alpine. This will save you from the tough climbs.

The Texas Hill Country starts in Camp Wood on Road 337 off of Highway 55. From that point, you’re just a 10 mile climb up to 2300 feet. From there, it’s just rollers after rollers. By this time, your legs should be well adjusted if you had ridden through Alpine, Boulevard or Emory Pass (see above).

I didn’t think ride was too bad all the way into Lost Maples State Natural Area. However, leaving camp the next day, the initial climb was pretty tough, but still not the steepest (more on this later). Besides the rewarding gradual downhill, we were treated to all the beauty Texas had to offer here. Both Sang Hyun and I agreed this was our favorite part of the trip as we made our way into the midpoint of the Southern Tier in Hunt, Texas.

Ironically, the steepest part of the trip was not found in any mountain pass or natural area. It was found just outside of Austin, Texas in West Lake Hills. Right before we made a right onto Bee Caves Road from Barton Creek Blvd, the road pitched up to 18.2%. I managed to make it up there only because I stood up to mash. Sang Hyun resolved to walking as his smallest gear was not effective for the grade.

Pro-tip: No shame in walking. You still made it on your own strength and effort.

One of the biggest regret I have from our trip was that we didn’t take the alternate route to New Orleans when we had the chance. It would have added another 2 or 3 days to our trip, but it would have been worthwhile to visit the town by bike. Our friends, whom we met on the road, actually went to New Orleans and they said it was fantastic!

We did get to go back by car but if you’re traveling one way and not planning to drive back home, I would say don’t pass up this opportunity to ride pass Baton Rouge and into New Orleans for a visit.

Our host in Ethel, Louisiana recommended that we head straight down to the coast as soon as we get the chance in Mississippi. So we obliged.

After spending 1 day on the route into Poplarville, Mississippi, we veered off route on Highway 53. Not the best riding conditions as the shoulders were nonexistent. Both Sang Hyun and I were honked at and given the bird several times, but at least they saw us!

We eventually made our way for our first glimpse of the Gulf of Mexico in Biloxi, MS. There’s something magical when you finally reach the point in your trip where the environment completely changes and you see a large body of water after only seeing desert and swamp.

The roads going into Alabama to join with the official Southern Tier route in Grand Bay were immaculate. It was nice and wide, felt comfortable to ride in. But the rest of Alabama had less desirable conditions.

Pro-tip: See the Gulf as soon as you can. You can follow our path from Poplarville or ride from New Orleans.

Believe it or not, Florida has the best roads and riding conditions out of all the states I’ve ever biked in. We were told that they create a buffer lane every time they repave a road in Florida. This is in high contrast to the popular bike touring book, “Miles from Nowhere” by Barbara Savage which described Florida as the worst state for bicycling in the 1970s.

You can see that they are trying hard to make bicycling a part of the transportation model which is a lot further than even California. The lanes are wide and there are so many amazing bicycle trails, I was so glad to end the trip with such optimal conditions.

There you have it! All of the most notable and useful tips for those traversing the Southern Tier.

Did you find this information useful? Am I missing anything? Let me know in the comments.

Also, let me know if you have any questions about the Southern Tier in general. I am here to help!