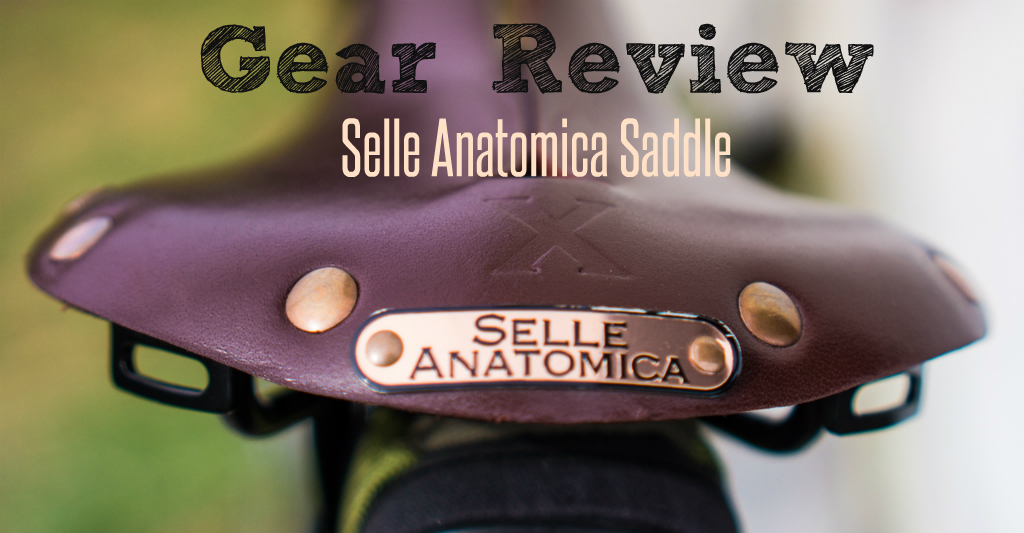 “Isn’t that the same company?”

For a saddle that has a huge underground following, the Selle Anatomica is a very confusing brand when I first revealed it to my cycling friends. This would be my latest addition to the Salsa Vaya in an effort to constantly improve the comfort of the ride. What convinced me to buy it was a tour leader from Adventure Cycling had told me that this was the only saddle he put on all his bikes because there wasn’t any break-in time. Then when I came home from Oregon, another friend of mine, Errin Vasquez, was sporting it on his J. Bryant and swears by it. He also confessed that it was the only saddle that he outfits on all his bikes. That was all the social proof that I needed to justify pulling the trigger on this purchase. I ordered their popular “X” Series saddle on November 18th and received it on November 20th. Pretty fast service delivery!

Before we jump into the saddle review, I wanted to give a quick overview of what Selle Anatomica is all about as some of you may have never heard of them. History of the Saddle

The company was founded in 2007 by an engineer and cycling enthusiast Tom Milton, who was known to ride plenty of double centuries in his lifetime (that’s 200 miles in one ride). In fact, he was in the middle of his 52nd double century in Northern California called the Devil Mountain Double Century before he passed away in April 2010 during an uphill segment. Milton applied for a patent for his saddle in 2005 and was finally awarded the patent in 2008. Ever since then, his saddles have been very popular amongst all cyclists, and not just cycle tourists. It is one of the lighter leather saddles out there. Again, it was touted as the most comfortable leather saddle one could buy without needing a break-in period.

The big question now is, did it live up to all the hype?

With only 3 months and 533 miles spent on this saddle, it may be premature to make any strong claims, but this might be a good time to get my first impressions out for you. 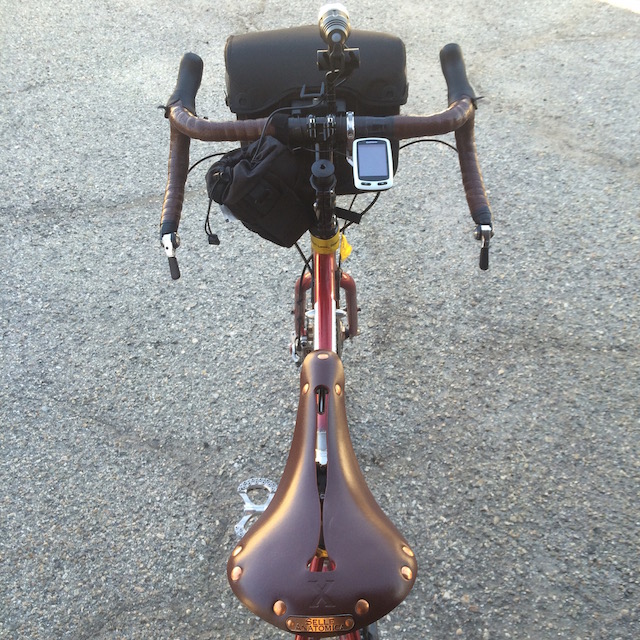 First of all, the saddle looks fantastic! I picked the Mahogany color, which is a dark brown leather. It goes very well with my Brooks leather bar tape. Besides the “X” Series, they have the “T” Series for lighter riders and the NSX Series, which is a stiffer version of the saddle. I will be talking specifically about the “X” Series in this review. There are 8 different colors to fit your fancy. The leather is fastened down onto the rails using copper rivets and the “Selle Anatomica” badge is prominently displayed at the back of the seat. There is a cut in the center of the seat which helps with the independent flexibility of both the left and right side, so when you’re shifting on your seat, it is much more comfortable. The adjustment to tension the seat can be accessed at the nose of the seat using an Allen wrench.

There is only one word to describe the first time I sat on the “X” Series and that is – WOW! Yes, it is true! The Selle Anatomica was the most comfortable seat I had the pleasure of sitting on. From Day 1 to the end of the 533 miles, I never felt saddle sores. It was like sitting on a similar leather seat that was molded to your personal fit. The hype is true.

The fact that this thing is sourced and made in the US brings on a sense of pride, especially when the quality is very good. Just know that if you decide to buy this saddle, you are supporting our local economy (if that matters to you). 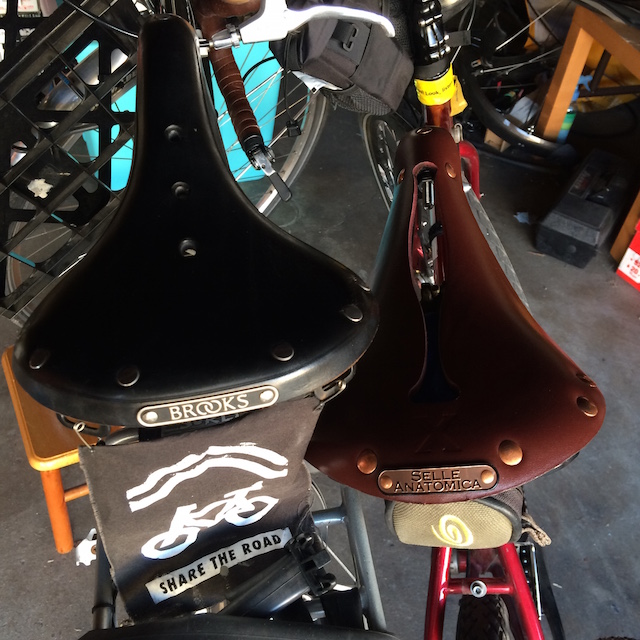 Unfortunately, there were a few things that posed a minor issue or discomfort. The saddle is known to lose it’s tension through prolonged usage or more stressful conditions like off-road riding. Both of which I have done. About 300 miles into usage, I started to feel the saddle sagging and the sides of the seat started to flare out. This in turn poked at my thighs more and made the ride awkward at times. In addition to that, the slit in the middle of the seat started to pinch at my bottom. Not good. These problems were easily remedied as I adjusted the tension again. No more flaring and no more pinching.

I have heard that many issues with this saddle has to do with the sagging. People who weigh over 215 lbs have returned the saddle because the rails of the seat started to bend even though it is rated for 250 lbs. Hopefully, Selle Anatomica resolves this issue soon. I personally will never have this problem as I weigh 100 lbs less than the maximum.

One other issue I’ve experienced is that the “Selle Anatomica” plate at the back of the seat was slightly bent after my bike accidentally fell down. I tried to bend it back into place, but that did not work very well, so on rare occasions, my shorts would get caught on this plate while riding. My concern is that this prolonged usage can separate the seams of my shorts. I have taken a pair of pliers to it and flattened the badge down. Unfortunately, that scratched the plate a fair bit. 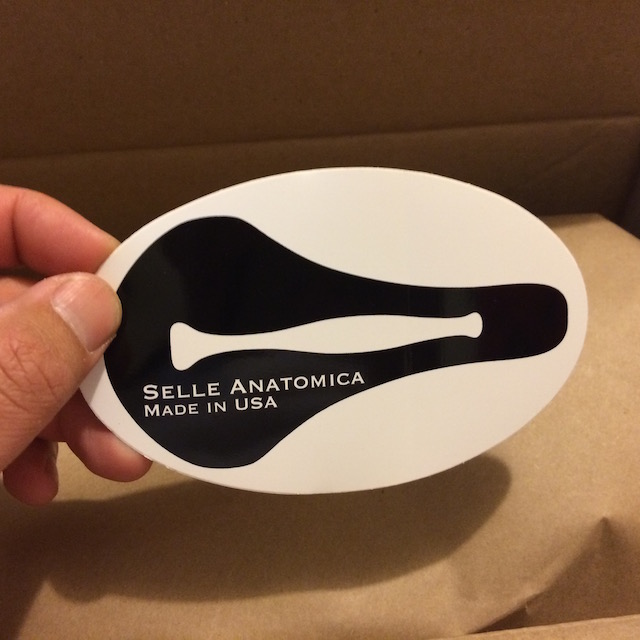 Should You Get One?

Even though I’ve only owned this saddle for a short time, I highly suggest that you pick one up for yourself. Of course, if you weigh over 215 lbs, I would check in with the company and make sure they’ve resolved the rail issues. The fact that it is so comfortable makes it a worthwhile purchase. Just remember to tension the seat every few months and be aware of the sagging.

The only thing I haven’t done with this saddle is ride it out in the rain. I have heard promising things about this as the saddle is waterproof to some extent. I also haven’t had to put leather treatment on it yet. I will most likely do that after I’ve gone through an extensive rain ride or two.

I will do another review after putting on a few thousands miles and let you know how this saddle fairs through normal wear and tear and extensive saddle time. For now, I am really happy with this purchase.

I had emailed Selle Anatomica after this article was published and they responded with the following points.

Love your article. You got most things right, but a couple things to point
out.

#1 – your saddle needs tensioning. The reason you were getting pinched is
the narrowest part of the rear slot should always have about 6-7mm or 1/4″
of opening. Those two sides of the slot should never touch AND you have a
bit too much hammock or sg.
#2 – don’t ride this saddle in the pouring rain. Although the top of your
saddles are watershed leather, the underside is not, and as we all know,
when riding, water comes up from the road to get the saddle wet, not down
from the sky. I’ll send you a bottle of waterproofing for you to apply
particularly to the raw edges and underside of your saddle. Send me your
current address.
#3 – our saddle is rated to 250lbs, but riders at that weight must be VERY
careful on the bumps. Because our rails are so long and afford so much
fore/aft adjustability, and because bigger riders tend to set the saddle way
back on a setback seatpost, the bigger riders are creating a situation where
there is significant weight behind the center of gravity. They hit the
saddle hard going over a bump, and the rails bend. We are exploring
hardening the rails for future iterations.
#4 – our return rate for premature leather stretch and bent rails is less
than .5% of sales, so although this is something people write about, it is
not a significant issue. We do replace rails and leather one time within a
12-month period under our warranty if either fails.
#5 – if you want to send yours back for a repair of the nameplate, we’ll be
happy to do that for you.

Thanks for the review. Much appreciated. If you’re ever in San Diego,
please stop by.

Talk about great customer service. I am certainly going to stop by when I am in the San Diego area to meet the folks behind this great saddle. 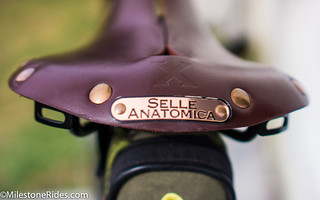 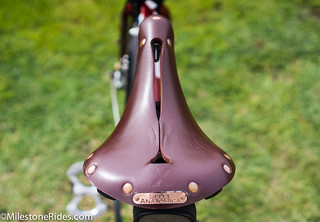 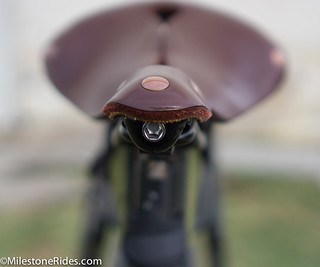 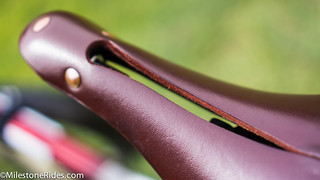 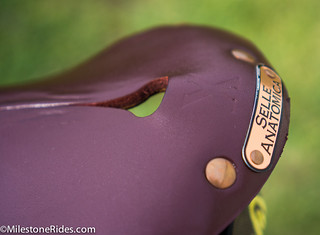