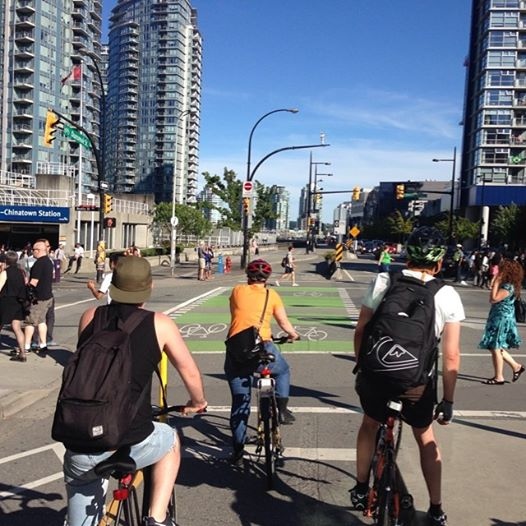 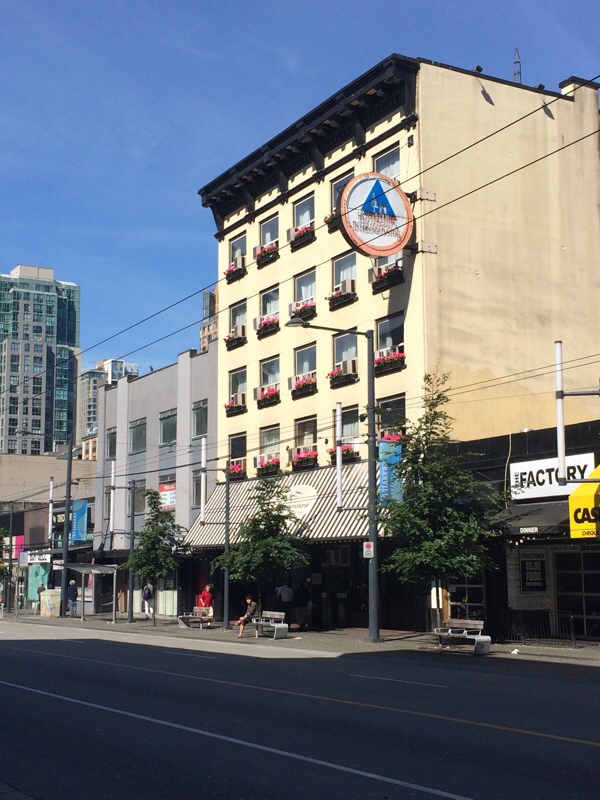 The last time I was here in Vancouver, British Columbia, Canada was back in 2007.  That was when we decided to do a week-long road trip up from Los Angeles and then fly back home.  Arriving in Vancouver again Wednesday afternoon and being picked up by a taxi gave me similar perspective as it did 7 years ago, the city behind a enclosed metal and glass box.  This time around, Vancouver gave me a whole new perspective that I would never have believed until I witnessed this first hand. 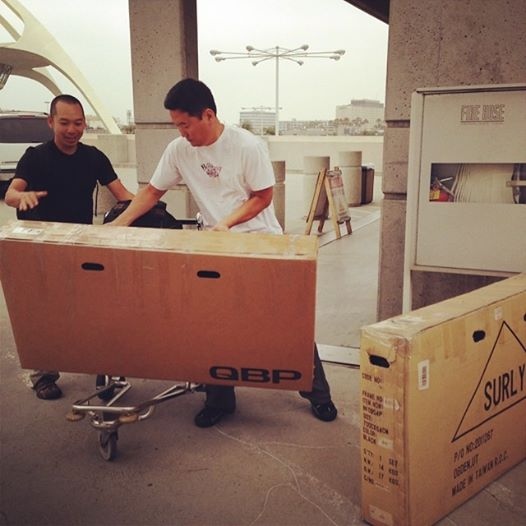 Before I get into that, let me rewind and start from the beginning.  We left for LAX airport at 6:30 AM for our 9:55 AM departure.  The airline recommended that we should give ourselves 4 hour buffer to check-in and get ready to board at our gate.  We erred on the side of caution and got there with 2 hours to spare.  The first task was to check-in our luggage.  This included 2 bikes in a box and 2 carry-on luggage with all our panniers and stuff that we will be hauling down the coast in the next month.
The first challenge was to maneuver our bikes around the parking lot into the airport terminal.  The airport was not designed for such a wide load.  The longest of our boxes was about 55 inches.  We had difficulties making through concrete separators in front of the elevator.  We also had to unload and reload the boxes onto our cart several times before we made it to the Alaska Airline terminal.  Luckily the luggage check-in line was short and we got help almost immediately.
This was where things got a little heated.  The attendant, Mary, who helped us stated that since we have bike boxes we need to pay for over-sized items.  I was outraged as I showed Mary the Alaska Airlines shipping terms for sporting goods, which I printed out anticipating something like this would happen.  The term states that we would not be faced with a charge of over-sized baggage if we are under 50 lbs and 62 linear inches.  I read this as “under 50 lbs and 62 inches”.  With my box measuring in at 55″ x ? x 7″, I am at that linear inch threshold just with my width and depth alone (calculation for linear inch = width + height + depth, for those who are curious).  Mary even went to talk to her superiors but was told to charge us for the over-size rate and have us complain to their customer service.  I was committed in doing that before one of my Instagram buddies (@thedudeabidesman) explained to me the calculation of linear inches.  This is definitely a learning experience from flying with our bikes for the first time.
The rest of the morning went on without a hitch as our flight from LAX to YVR (Vancouver International Airport) was smooth with the exception of 2 chatty toddlers in front of us.  The arrival was also one of those things we’ve never done where we had to check-in with Canadian customs to let them know why we are visiting their country.  My agent was not impressed when I told her that we are here to ride down to San Francisco.  She wanted to know how long and where were staying through-out our trip.  We both finally got our passport stamped and went to pick up the luggage.  Sang Hyun decided to pick up the bikes while I waited by the carousel for our luggage.  45 minutes later we were out of the airport in a taxi van heading North towards downtown Vancouver. 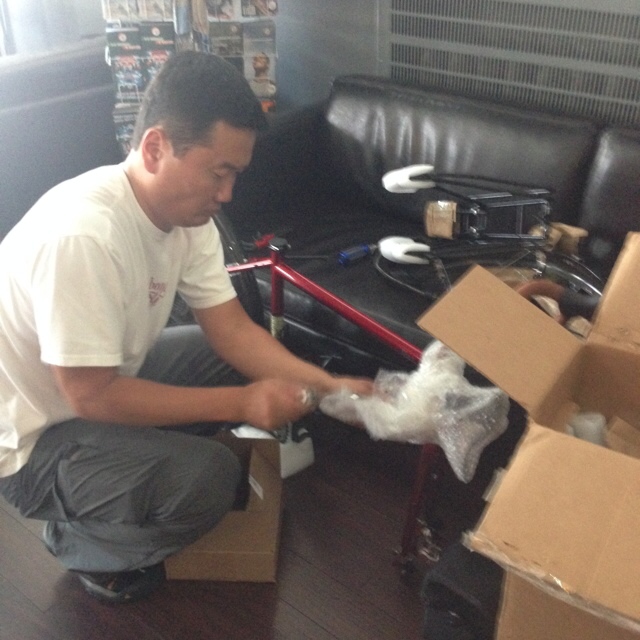 As I explained in my previous post that this is Sang Hyun’s first hostel experience and my second in Vancouver.  The hostel check-in went very well.  However, they did not want us to assemble our bikes in our room but instead do it in the lobby area.  Sang Hyun transported our luggage into our room while I pulled out our bikes for assembly.  It was apparent that the TSA opened our boxes and threw everything back in with haste as my bike was upside-down in the box.  Grrrr…  Luckily nothing was broken or bent from our travels.  3 hours later, both our bikes was put together.  I even got to see my bike with new fenders, handlebar bag, and bar tape!  It’s like a whole new bike.
The plan for the day was to send our luggage back along with things we don’t need. Unfortunately, when we were finished, it was already 5 PM and the post office was closed.  Instead we decided to hop on our newly assembled bike and tour around town.

Bike commuters on the cycletrack

This was where my world was turned upside-down.  We found a street called Dunsmuir Street with a protected green cycle track.  It was such an amazing thing as we flew down the lane with 10 to 20 cyclists flying from the west to east as we all hustled over the bridge past the Rogers Arena, where the Vancouver Canucks play.  We made our way over to Broadway and Manitoba where we found the Canadian REI, MEC (Mountain Equipment Co-op).  We bought 2 canisters of Jetboil fuel and 2 packs of dehydrated food for emergencies.  We were required to join their life-time membership in order to purchase the items.  It costed us $5 Canadian to do that so we did.  Now we can always shop at MEC whenever we are in Canada.
We finally got food at 7PM at a Ramen place which covered both lunch and dinner.  We devoured our piping hot bowls of noodles and enjoyed our ride around the city.  Since the last time I was here, Vancouver has blossomed to be one of the most bicycle friendly cities in the world.  I have read about this over and over until I experienced this first-hand.  It definitely did not disappoint.  Even though there are several cycle tracks, bike paths, sharrows through out the city, there are still spots where only the brave riders would go if you’re comfortable taking the lane.  This isn’t a bad thing as drivers seem to be courteous as it was definitely apparent that bicycles were everywhere else.  I probably wouldn’t go through some of the more congested streets as there are definitely near-by bicycling infrastructure options. 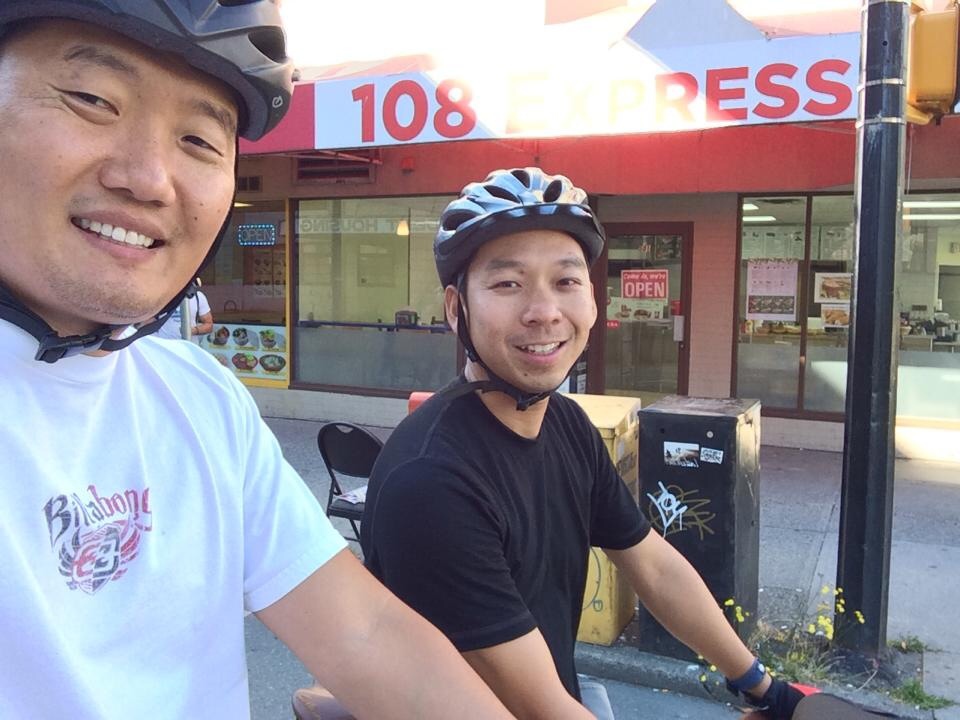 Our adventures ended at 9PM where we retired in our room and planned out Day 2.  I am writing in the morning of Day 2 in our hostel while watched people grab their complimentary breakfast before they head out on their own adventures.  I can only hope that they are enjoying this great city as much as we did.  But for now, we’ll have to say, au revoir and promise that we’ll make it back here again for some more urban exploration.

The Next Few Days 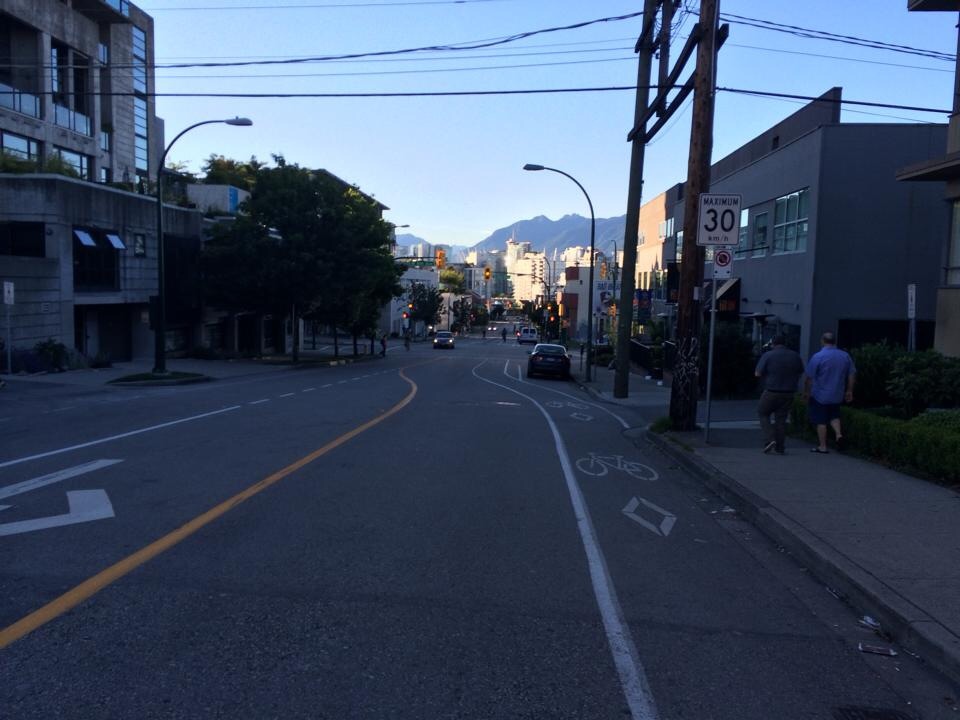 For the next 4 days, we will be heading north up what they call the Sunshine Coast (such a pleasant name).  We will probably be on ferries more than on the bike for this round of the trip as we make our way to Victoria.  I don’t anticipate being any WiFi access in these remote areas, but I could be wrong.  That means my blog updates and social media updates will be limited.  I may have consecutive posts pop-up all in one time but I plan to keep blogging until I can update whenever possible.  So don’t venture off to far as we will have updates for you soon!