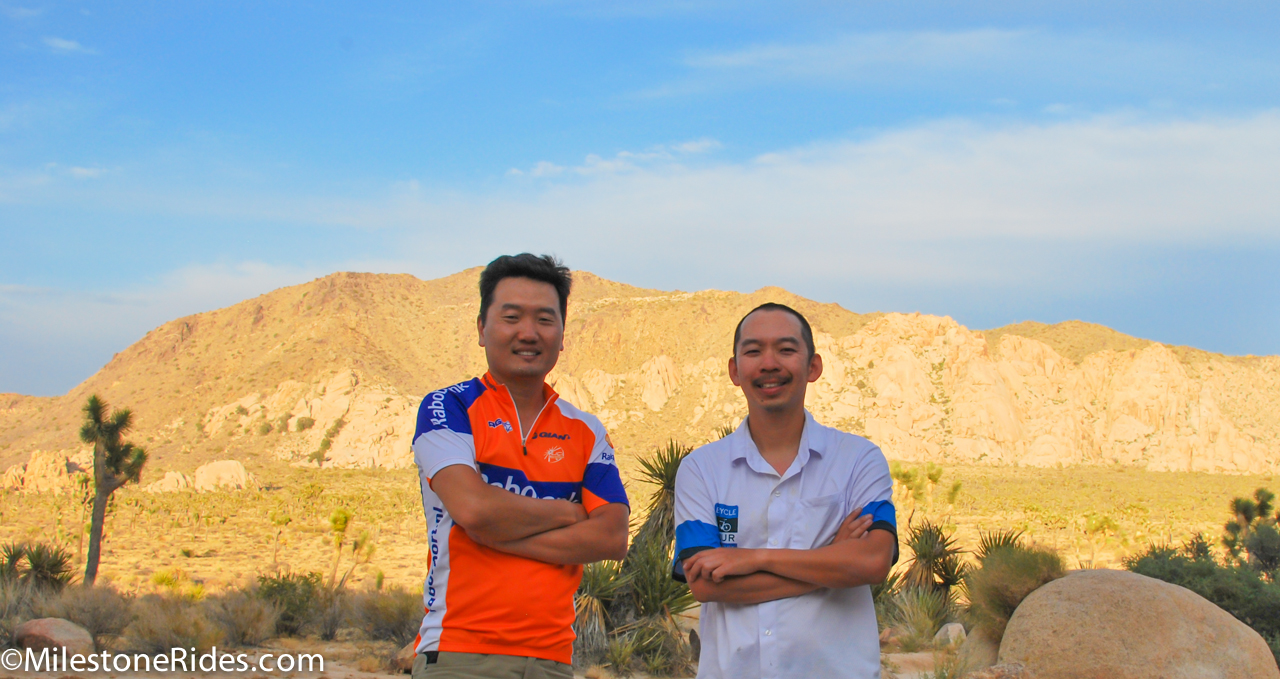 One of my favorite albums since my high school days was U2’s Joshua Tree.  The cover was black with a gold trim and the band standing in front of the Joshua Tree National Park backdrop.  Ever since then, I’ve always wanted to go to this enchanted place.  Fortunately, I have been through Joshua Tree several times in the past, and this 4th time was one to remember.  It was my second time by bike, however, this time, we were able to go into the park and camp overnight.  We did not get to camp the first time due to a shortage of campgrounds during Memorial Day weekend last year when we tried our first attempt.  Poor planning on our part, but we decided to try again this year – this time, after the exodus of the vacationing crowd.

Our journey started at the same place, Chino Hills, where my sister and Sang Hyun live.  I arrived on May 26th evening, the night before our departure.   We woke up at 6:30 in the morning to load up our bikes and weighed ourselves, as well as our bikes with our full loads.  We each carried 4 panniers (2 in the front and 2 in the back) and our tent. 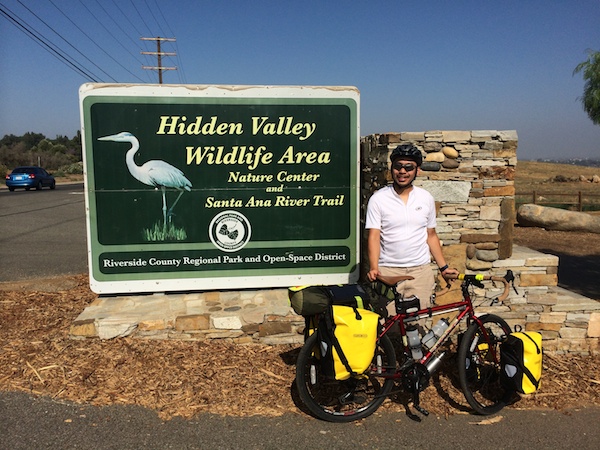 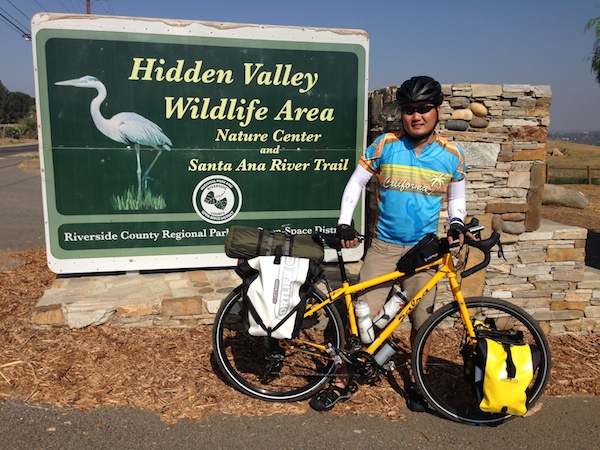 Down the Santa Ana River Trail

We traveled through Corona and Norco until we reached the entrance of the Santa Ana River Trail. This was a welcoming sight as we were treated with great views of the Santa Ana River, away from motorists and on our own dedicated bike path to Redlands.  We hustled off the bike path in a matter of a few hours and found lunch over at the local Del Taco.  The start of the most challenging part of our ride came after lunch.

We made our way up to San Timoteo Canyon Road, a two-lane road which has very little shoulders for cyclists to ride on, so for the majority of the time, we made sure we were seen as vehicles flew by at 45 to 55 mph, driving over the double solid lines of the road.  To add to the challenge, the sun was out in full force in the mid 90 degrees.  We were both exhausted when we reached Beaumont. 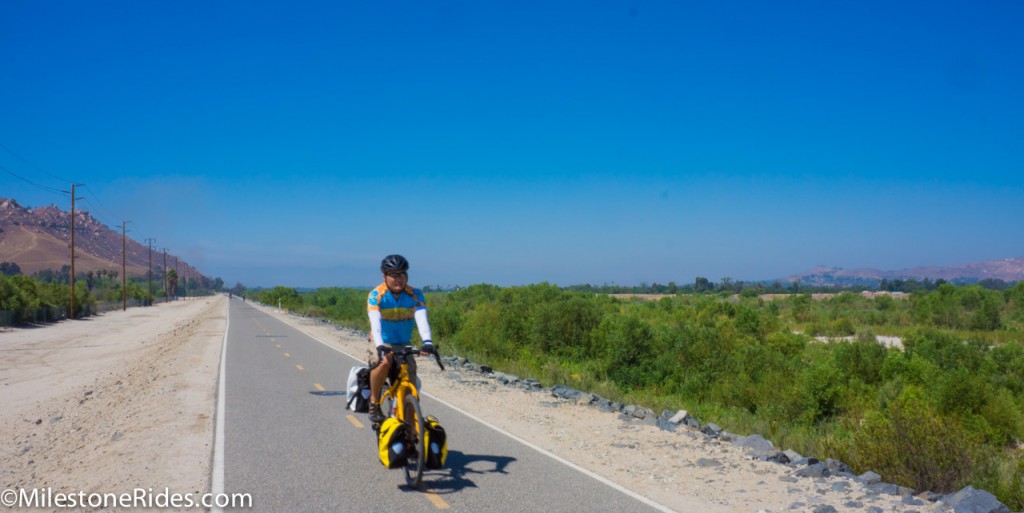 Instead of staying at a hotel like last year, we found a great camping KOA park for RVs.  The Stagecoach KOA had a few tent spots, so we were able to secure a spot for $25 per night for the both of us.  They had showers, laundry, and a pool for us to enjoy.  We took advantage of the shower, but did not do any laundry or swim.  Our campsite was comfortably lined with lush green grass.  Our neighbor, Peter, was from Oregon, and he was camping by himself with his Co-Motion Americano bike with SS Couplers and a trailer for all his gear in tow.  He had ridden the bike and trailer through Idyllwild the previous day and was taking the day off to recover.  He told us he decided to end his trip early because the weather was just too hot, and he was returning home to Oregon.  I suggested some locations to stop on the way back to LA Union Station.  I told him to take the Metrolink to Union Station to save himself about 2 days of riding.  He was gracious for that bit of information. 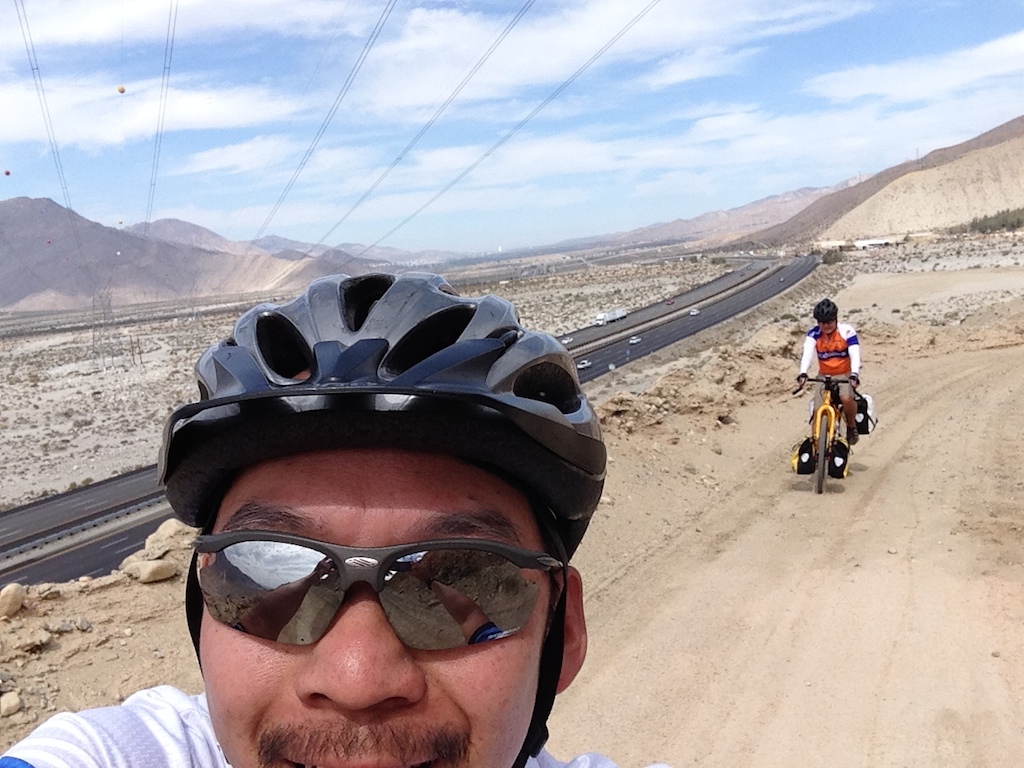 Riding up Rock Mine Road

We anticipated that riding into Joshua Tree National Park was going to be as challenging as it was last year.  We left our camp at 7:30 in the morning and had breakfast over at the Mc Donalds at Cabazon, a favorite shopping spot for many shoppers looking for deals.  After breakfast, we were treated to an incredible tailwind blowing from west to east.  Much like last year, we were all smiles as the wind and the mild descent made it very easy for us to travel the length of 12 miles in a matter of minutes before we had to turn off into dirt roads. 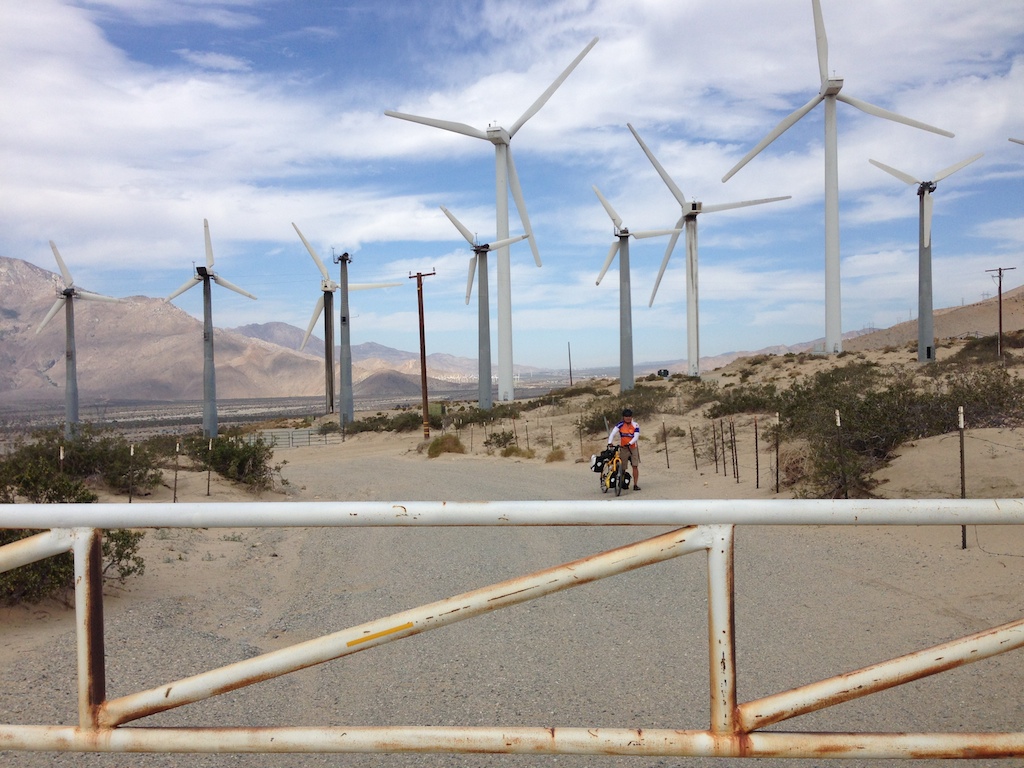 We made it to the intersection of Haugen-Lehmann Way and Tamarack Rd where we made a right turn and continued East, initially on paved road, but eventually, the road became gravel and sandy so we deflated our tires to improve traction.  This was something we didn’t do last year and had a very difficult time, but with this bit of an adjustment, we sailed through the gravelly fireroad with ease.  I was especially excited with our new-found abilities and eagerly rode through to Whitewater. 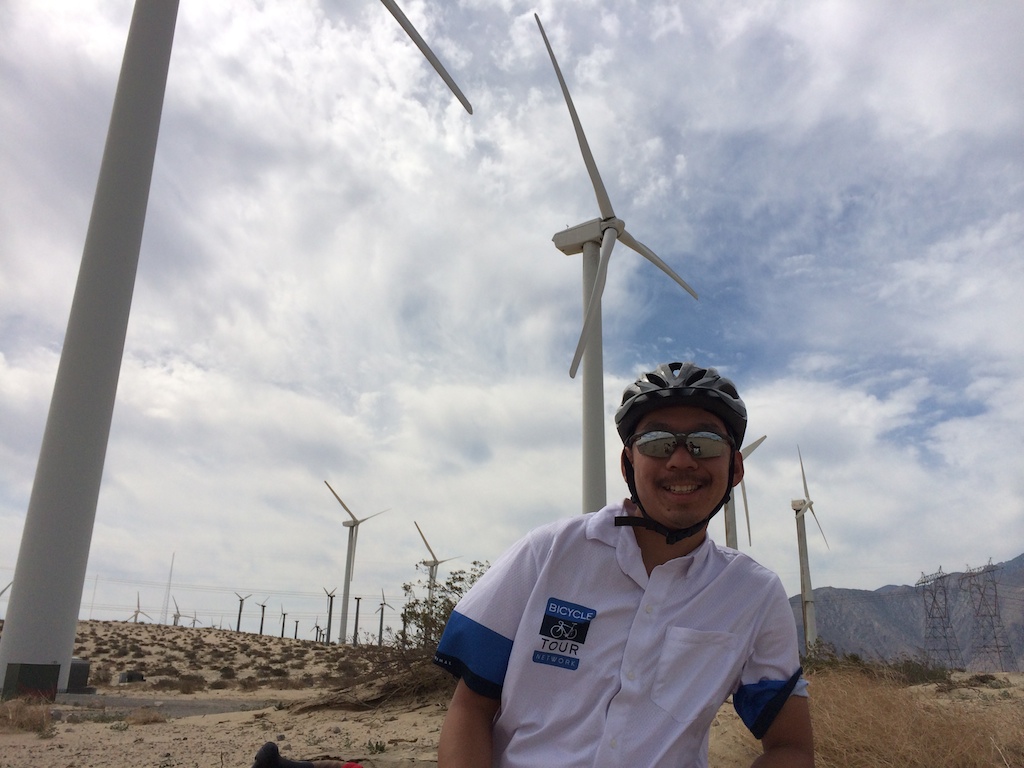 Johnny and his fans. Get it?

In Whitewater, there is one last stop for water at the Whitewater Rock & Supply Company.  Fifty cents for a bottle of water, so if you’re doing the same trip, note that because the next time you’ll get water is in Morongo Valley after one of the steepest climbs on this trip.  We eventually made it to the bottom of the gravel road, known as Rock Mine Road, which is an ascending gravel road only frequented by big rigs and construction vehicles.  Again, the climb was easy, and we made it to the entrance of Painted Hills Road, which is a private road.  It was a cinch to get around the closed gate and apparently trespassed.  I’ll get into this issue of trespassing on Day 4.  We got to see these giant turbine fans up close and personal again.  This was one of my favorite places to ride through on a bike.

We rode through this section in some unusually sandy roads, which made us get off and walk some parts so that we didn’t topple over.  We finally reached the residential side, where we both inflated our tires to get less rolling resistance since the next gravel riding would not be done until Day 4 upon our return. 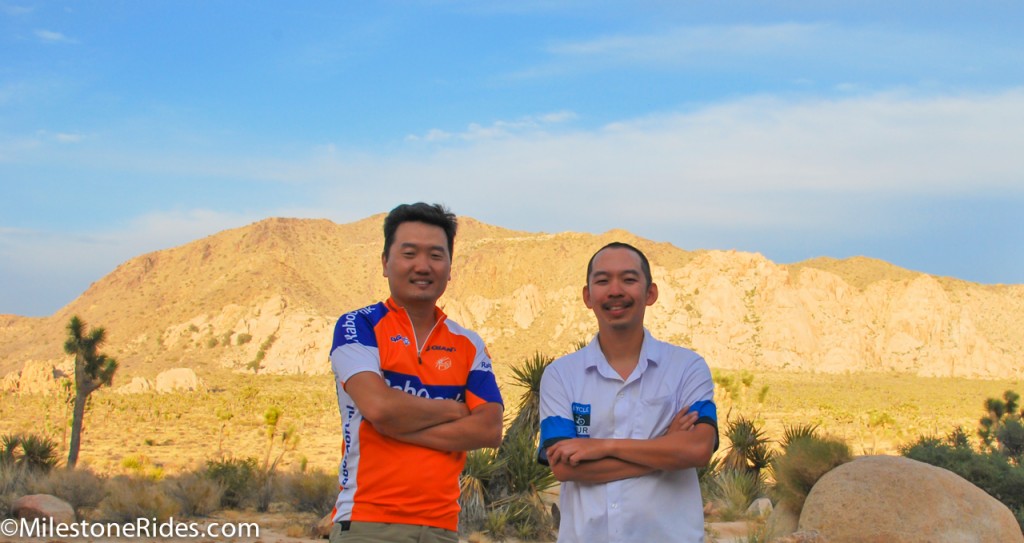 Made it to camp

We got on Highway 62 and proceeded to ride North with a bit of tailwind.  That really didn’t help when we approached the first climb up towards Morongo Valley.  It was a good 4-5 mile ascent up to the top before we sailed down to the valley for some refreshments and salty snacks.  Another thing we learned was that we need to pack both salty and sweet snacks.  With the amount of salt we lost from sweating, we needed to replenish and help rehydrate our bodies.  The sweets were great carbohydrates to provide energy for us to keep pedaling.

What was interesting this time around was both Sang and I felt really good riding up this route compared to last year when we felt lethargic and tired.  We easily got up and down 3 significant hills to reach Yucca Valley.  The first place we stopped was a diner called Carla’s Route 62 Diner for lunch.  We got in right before they closed at 2:30 PM.  If there was one place you should stop by when you’re in Yucca Valley, this is it.  The service was excellent as they allowed us to park our bikes in the gated patio area.  They then brought us a pitcher of ice-cold water, which we were in dire need of as the temperature climbed up to 100 degrees.  They took our order and got our food out really fast.  We devoured our lunch in less than 5 minutes and guzzled all the water we can drink.  They even topped off all our water bottle with ice water before we left.  We graciously thanked them and said our goodbyes. 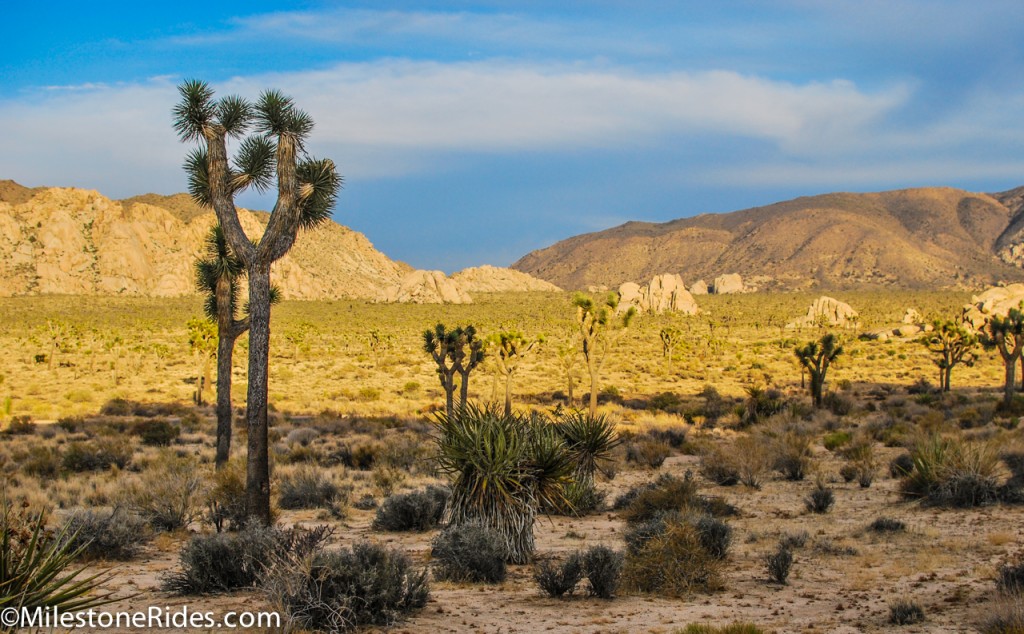 Before we left Carla’s Route 62 Diner, we had to reapply sunblock since both of us washed our faces and hands before lunch.  In the process, I decided to lubricate my eyes because my contacts dried them out.  When I dripped eye drops in my right eye, it was so slippery that my contacts flushed right off my eyeball.  With a contact on one of my fingertips, I used the other hand to find my contact solution in one of my panniers.  Unfortunately, the wind had it’s own agenda as a gust blew my contact clean off my finger and disappeared against the white sandy floor.  That was why I had my glasses on for the remainder of the trip in my photos. 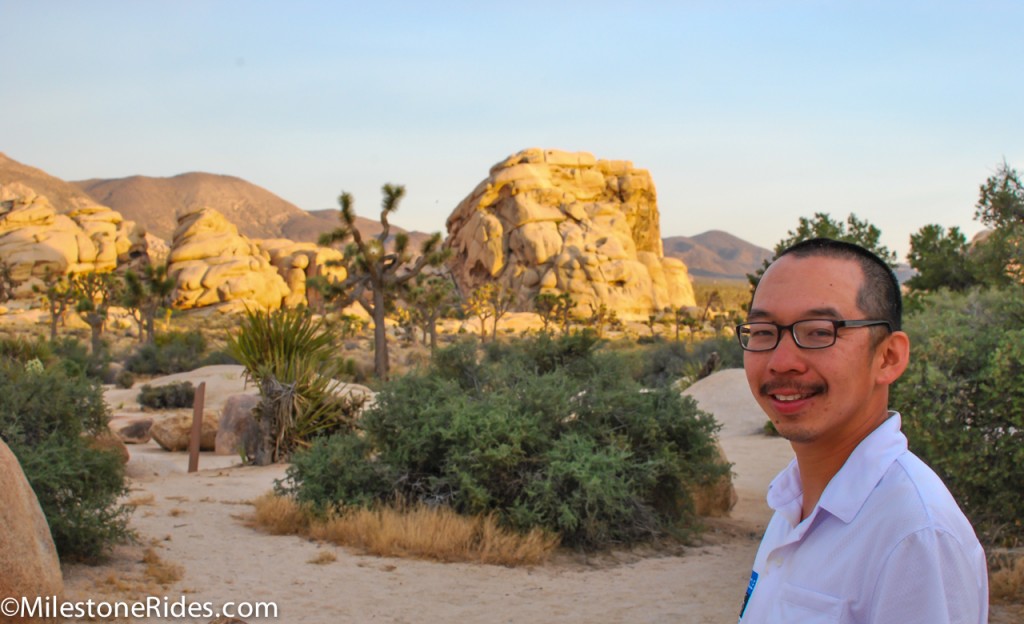 We finally got on the road looking for the only bike shop in the area, Joshua Tree Bicycle Shop.  We practically flew down the road with tailwind and another great descent down to the shop.  Sang Hyun decided to pick up 2 more bottle cages and 2 water bottles so he can double his water carrying capabilities on his Salsa Fargo by installing them on his front fork.

We both cruised down to Park Blvd and Twentynine Palms Highway 62 and started our uphill climb up towards the West entrance of Joshua Tree National Park.  This was 14 miles of non-stop ascent in which the first 5 miles brought us up to the entrance of the park for a quick photo-op.  We even passed the place we stayed at last year, the home of Mary Ann Kelly, who rented her rooms to us and any other guests passing by for the night .  The park ranger had left for the day, so we couldn’t pay our entrance fee.  We used the bathroom facilities and refilled our water bottles and my dromedary bag for the night. 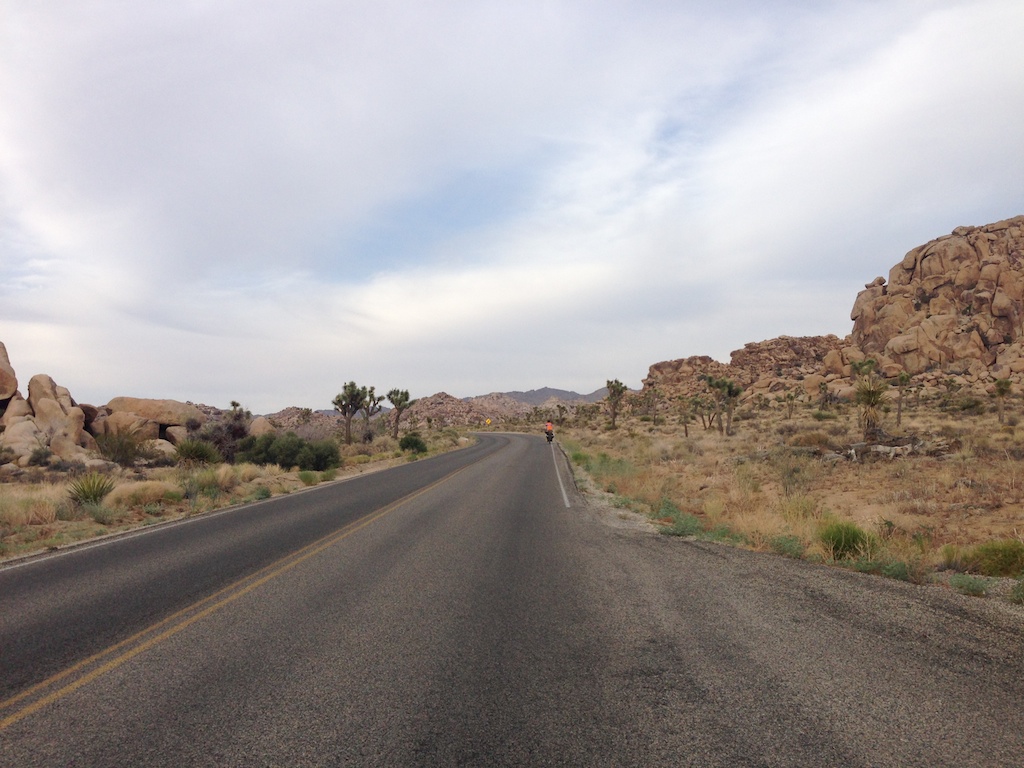 Ride up to camp

The remaining 9 miles to our campsite was probably the toughest we’ve had to do that day.  The first 4 miles was a constant climb up.  The next 3 miles was downhill and flat so we got through that fairly quick.  The last 2 miles was another climb up and a brief descent to the entrance of the Hidden Valley Campsite.  We got there at 6:30 PM and found a campsite facing the west side of the park.  We arrived in time to watch daylight being swallowed by the night as the winds continued to howl through our site.  We both surveyed the area and found a couple of flat spots underneath a tree and set up camp. 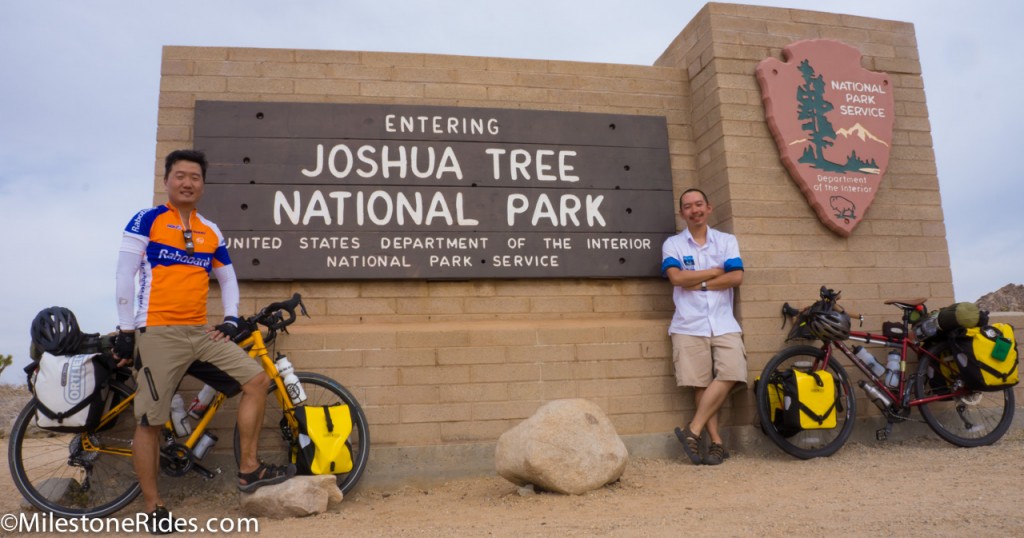 Dinner was quickly made using our Jetboil stoves.  We drank lots of water and polished off our meals in no time.  Our exhausted bodies thanked us as we sat motionless in the darkness of the desert looking at the constellations above until we both called it a day at 9PM and crawled into our tent for some much deserved sleep.

Day 3 to 5 continues on part 2 here and the video for the first 3 day is here for your viewing pleasure!  Please let us know how you like our ride so far in the comments below. If you have any question, don’t hesitate to ask them here or contact us.