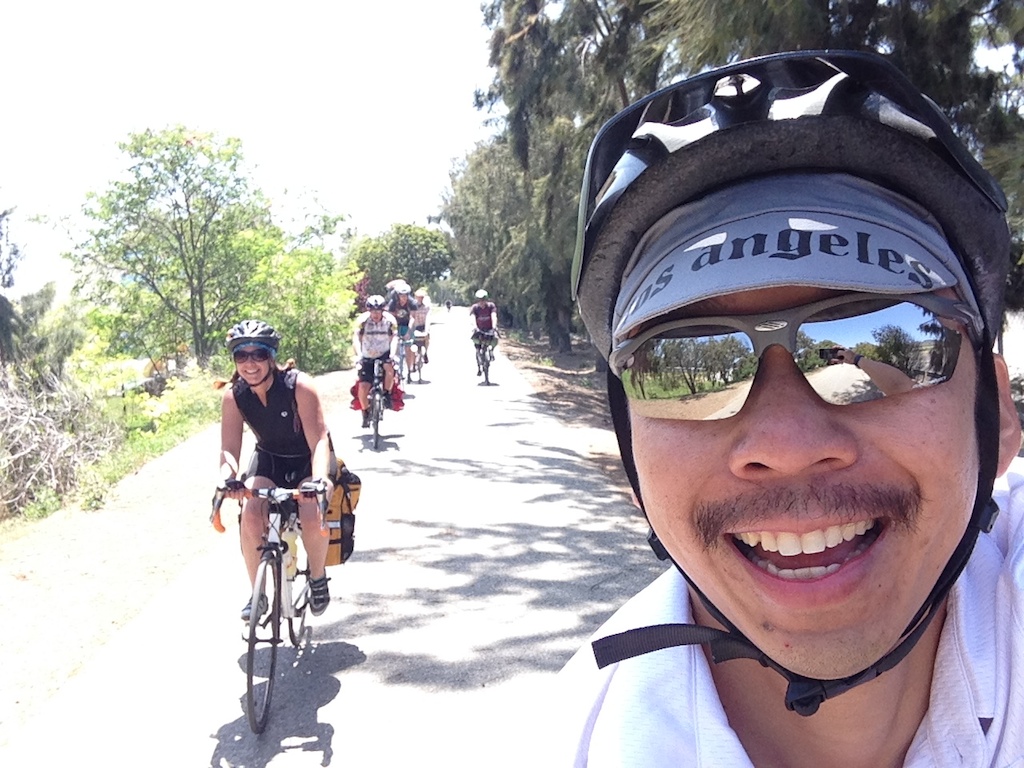 When Sang Hyun bought his bike a few week’s ago at Topanga Creek Bicycle shop, the shop owner, Chris Kelly, told us about the next bikepacking / bike touring adventure.  On April 22, 2014, Salsa Cycles was going to come out to Ojai to demo their bikes for anybody who was interested in checking them out.  Chris has been doing overnight and longer bike trips since last year, so he invited us to join him on this next trip to Ojai, which consisted a train ride into Ventura and then riding up to Ojai.  Knowing that I was going to be free from work, I jumped on this opportunity to travel with a group of like-minded individuals.  The details were actually very scarce until a few days before the trip.  I suppose Chris had been busy running his business to get the information out, but he got it out with enough time for me to figure out what I was going to bring. 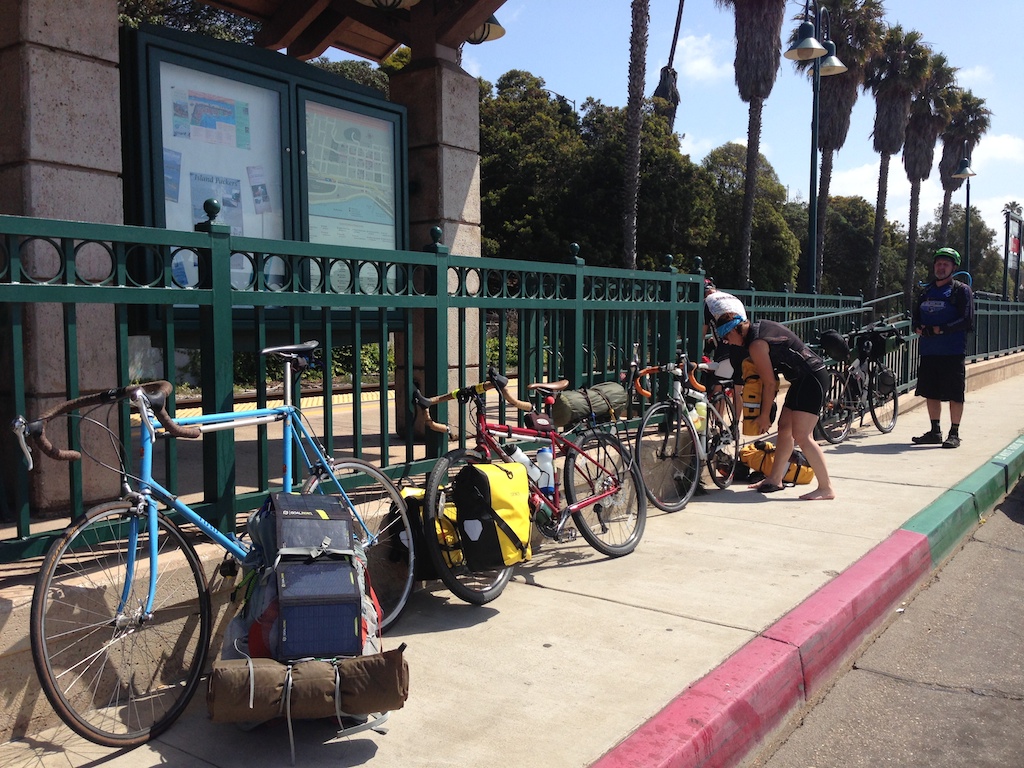 We made it to Ventura by Amtrak.

What I Brought (and didn’t bring)

I decided that I was going to bring 2 days worth of things, which consisted of my tent, sleeping bag, an upgraded Thermarest sleeping pad, food and snacks for 2 days, and clothes.  I actually had everything packed up and ready the night before.  I woke up a little later than planned and in my haste, I left the house without my wallet.  I didn’t realize this until I got on the train towards Ventura.  That meant no money, credit cards, or id’s for the trip.  Chris and the rest of the group joined my train at Chatsworth, California.  We quickly warmed up to each other after a quick introduction by Chris.  I sheepishly confessed that I forgot my wallet.  Ironically enough, Conrad, the gentleman who was traveling for Goal Zero company mentioned that he had forgotten his wallet as well.  Chris being a great host, lent each of us $20 for the trip.  This was perfect, as I used all of that on food and a bus ride home. 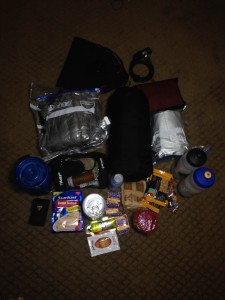 Things I was bringing on my trip.

We arrived in Ventura close to 11AM and rode straight to a Mexican restaurant on the Ventura Pier.  We were suppose to meet Lily, a young lady who was suffering from Junior Rheumatoid Arthritis (JRA).  As it turned out, 2 of my companions, Erin and Harry were going to ride the California Coast Classic this year.  I had ridden this twice, in 2010 and 2011.  Harry was part of the 2011 group, but I had not met him before today.  Rob from Ocean City Cycles also stopped by to join our group.  He sells beautiful custom-built bicycles and bags.  Rob was also a local of the area and offered to chauffeur us to Ojai.  Knowing that the ride up was only going to take about 2 hours, we took our time and took pictures with Lily, while hanging out and chatting it up at the pier. 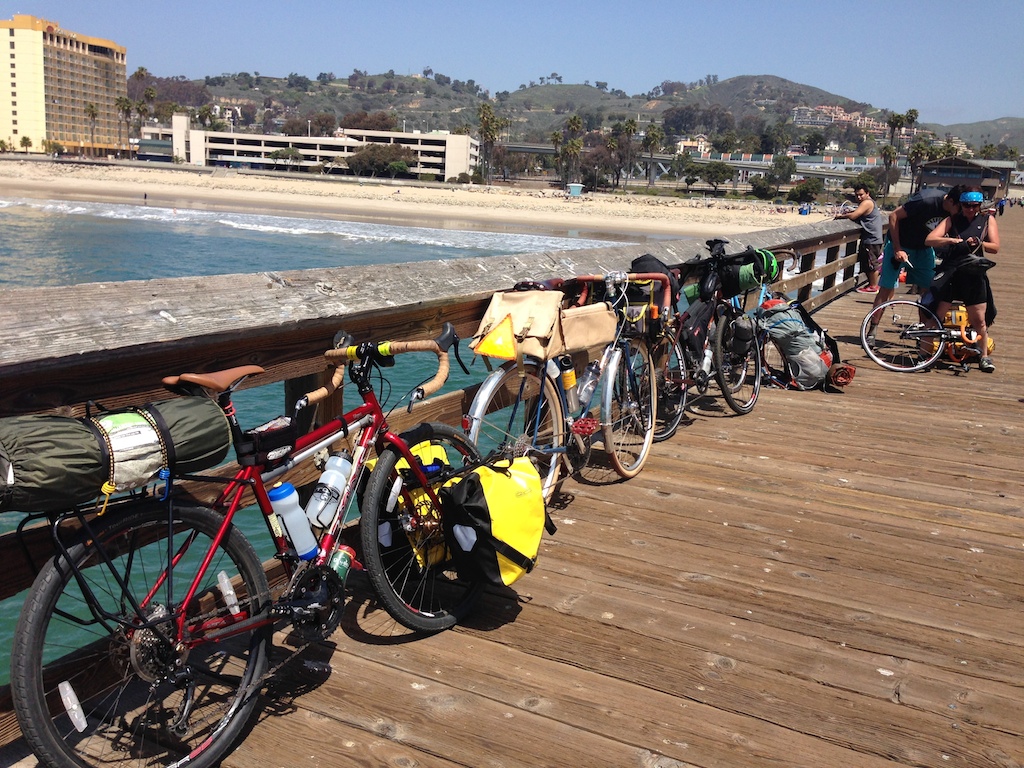 Bikes lined up on the Ventura Pier.

By the time we rolled out, it was past 12PM.  We rode up the Ventura River Trail and the Ojai Valley Trail which is a rails to trails path that made the ride up to Ojai very enjoyable as the incline was not apparent along the path.  The path also took us away from motorized vehicles.  It was probably one of the best bike paths I’ve ever ridden on.  About an hour into the ride, Conrad, the young guy with a heavy hiking backpack full of Goal Zero devices like solar panels, battery packs, and lighting, needed a break.  Everybody was very sympathetic to his situation.  We offered to carry one or more items for him, which made the rest of his trip significantly better.  We reached the local bicycle shop in Ojai called The Mob Shop.  The shop was once a gas station, but it was converted into a spacious bicycle showroom.  Everyone was very friendly and asked us how far our destination was and where we were riding from.  All-in-all, a very positive experience there.

Everybody on the way to Ojai.

Before we even started our ascent up to the Dennison Park campgrounds, everyone was starving.  We stopped by a local restaurant called Sea Fresh.  Lucky for us, it was happy hour, and we bought a bunch of fried foods to indulge our hunger.  It was apparent to some folks that was not a good idea as we started our climb up to the Dennison Park campgrounds.  The climb wasn’t too bad as it was about 1.5 miles of curving road.  The biggest motivation was that we were promised a beautiful campsite looking out towards the Ojai Valley. 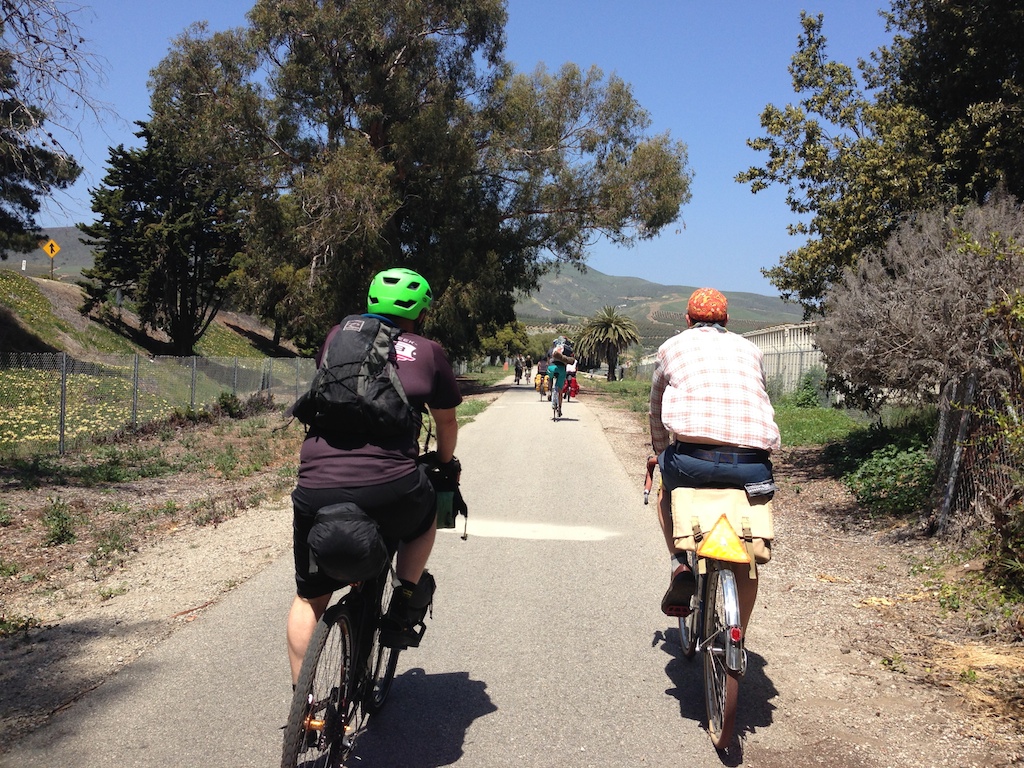 Riding up to Ojai

Dennison did not disappoint.  Although there was more climbing within the campgrounds, we found a perfect spot for our group to rest our heads for the night.  Everyone pulled belongings out of their bags and began to settle in by putting up their shelter for the night.  One of Chris’ friend, Scott, joined us by car and had graciously bought cupcakes and ice cream for everyone to celebrate Chris’ birthday!  It was a bit surreal to be there with a group of strangers and enjoying delicious pastries on a bike ride.  Erin hauled along some roast beef, Gouda cheese and sour dough bread to prepare for dinner.  We grabbed some firewood from the campground host and started a fire for cooking.  The meal was incredibly delicious!  We all retired with full bellies and tired bodies. 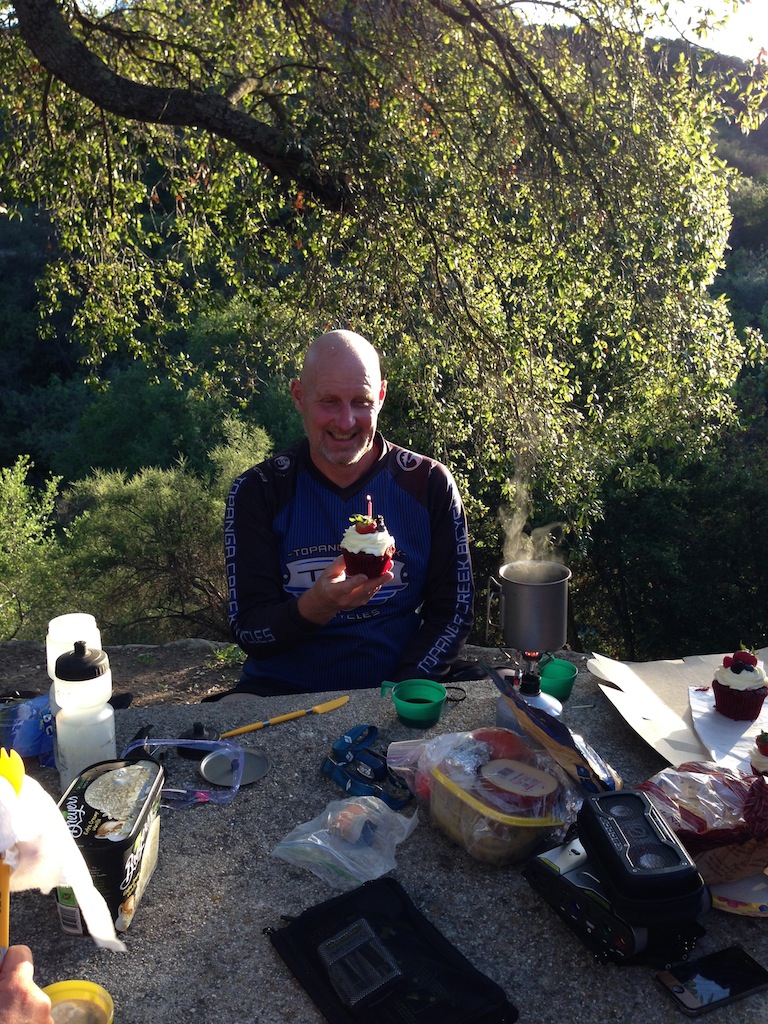 The next morning, we got up around 7AM.  Coffee was being made, people were taking down their tents, and I went to seek out water for breakfast.  We spent a few more hours relishing our beautiful campsite before we all packed up and flew down the same hill we climbed up the previous day.  The descent was fantastic!  My bike handled perfectly as I tried to load up my 2 front panniers and strapped the tent to the rear.  This configuration yielded a very balanced bike, and I’m planning on continuing to pack this way for shorter trips. 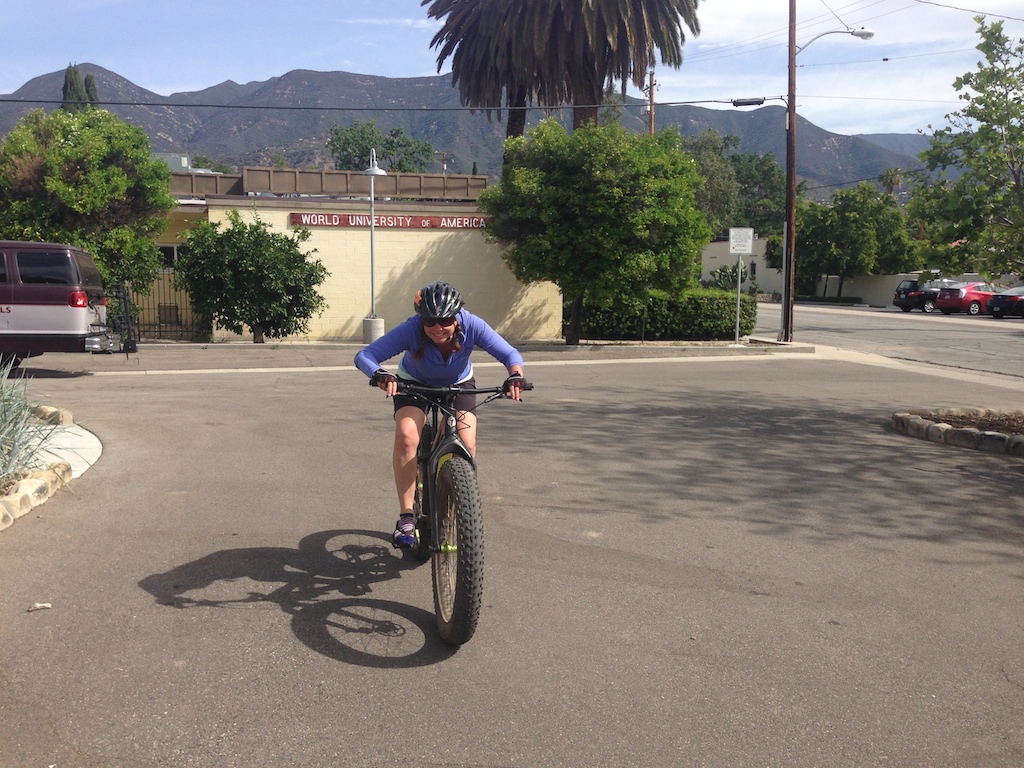 Fat Bikes for Everyone

When we got into town, we ate again!  With the amount of calories we burned the day before, our metabolism kicked it into high gear.  We stopped by a local coffee shop and some of us had bagels and coffee.  We made our way back to The Mob Shop where we saw Salsa Cycles’ red van.  Ben and Kip from Salsa were working on the fleet of bikes when we rolled in to introduce ourselves.  We all quickly signed our waivers and picked up our own Beargrease fat bike.  It was my first time on a fat bike.  The Beargrease was incredibly lighter than I thought.  The beefy exterior made it look heavy, but once you pick up the carbon fiber bike, you would be amazed at how light that thing is!

Our group of 6 with our fat bikes followed Kelly from The Mob Shop back to a remote location which featured our own little off-road course!  We all took turns flying through the ditch and laughing all the way through.  After several photo opportunities, we rode back to The Mob Shop.  We were quite a scene as the 6 of us on our fat tire bikes paraded through town.

Everyone said their goodbyes at the shop and hopped back on the Ojai Valley Trail.  It was pretty much a smooth descent down to Ventura with the exception of onshore headwinds.  That didn’t bother us too much as we made our way into downtown Ventura.  I led our group to a diner that Sang Hyun and I went to the last time we bike toured through Ventura called the Busy Bee Cafe Diner.  The food was abundant, and the company was hysterical!  Our group had to split at this juncture, so we said goodbye to Harry (aka Bad Grandpa) and Conrad (aka Junior) who both opted to ride the train back to Chatsworth.  Erin, Chris, and myself decided to ride back into LA. 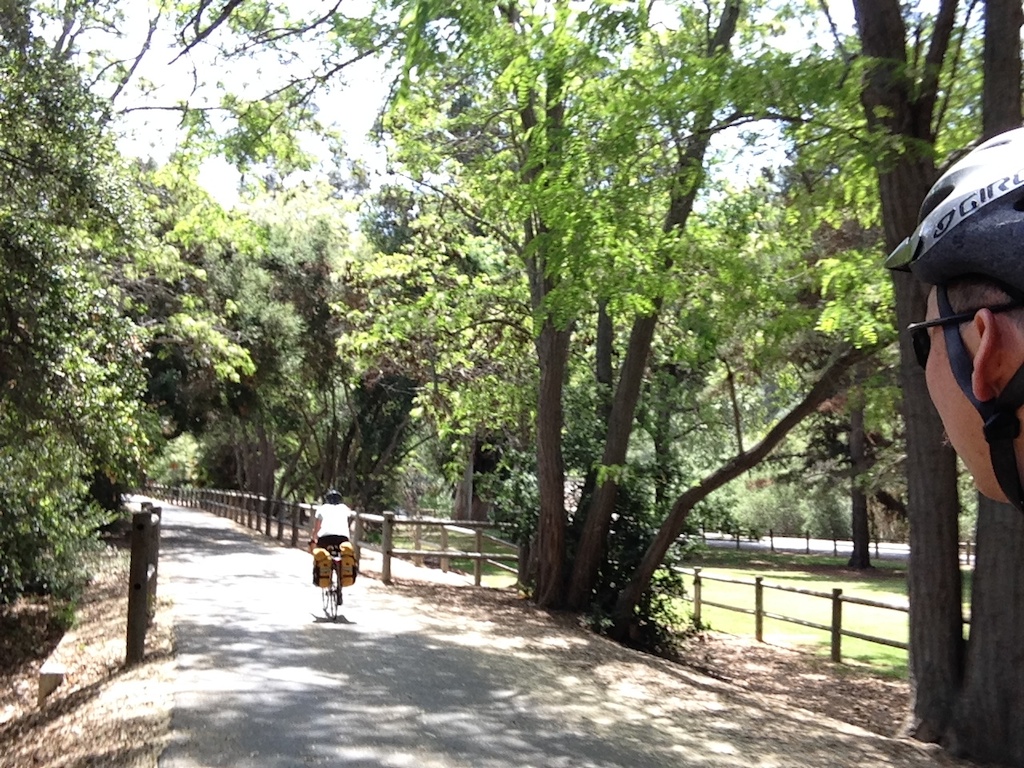 We followed the Pacific Coast down PCH with tailwind behind our backs.  The weather was beautiful.  By the time we made it to Topanga, where I split off from Erin and Chris, it was about 5PM.  We bid farewell as they waited for Junior to come by car to pick them up and drive back to the shop.  I continued my journey through Santa Monica, Beverly Hills, and eventually made it to Hollywood and Vine where I decided I was going to take the bus back into Burbank. 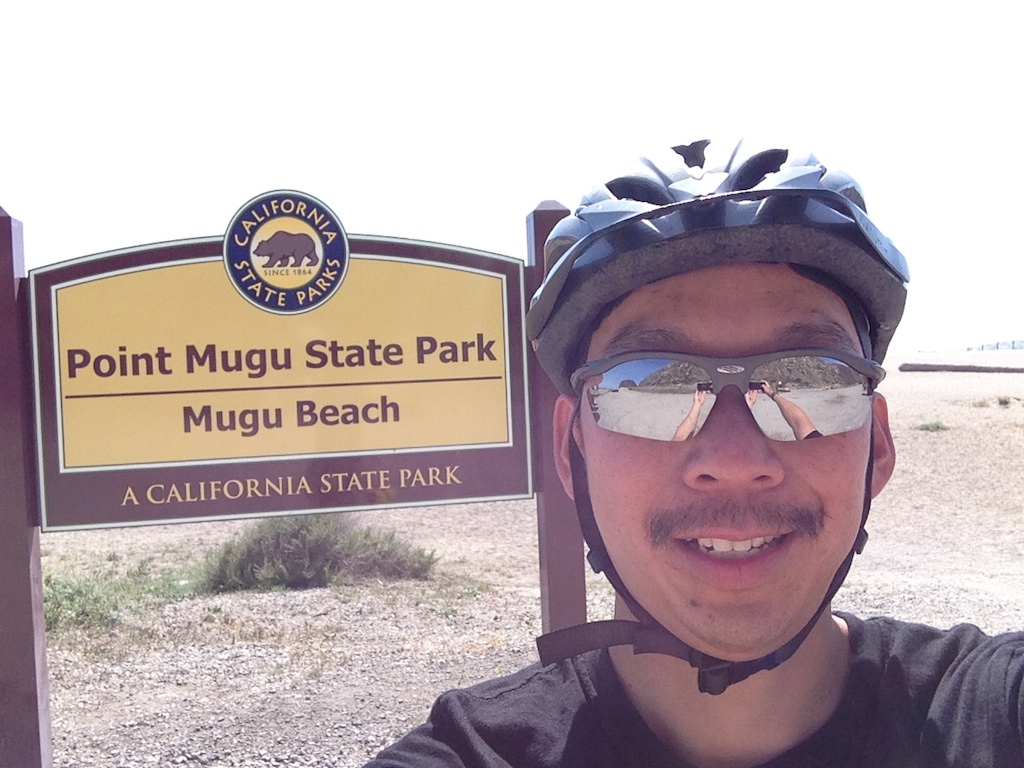 Made it to Point Mugu.

I am still amazed that a short trip with a small group of people yielded such great times together.  I felt that everyone bonded very well and we all grew closer as friends.  I can’t wait for the next bike adventure with these guys!

Enjoying our campsite at Dennison Park