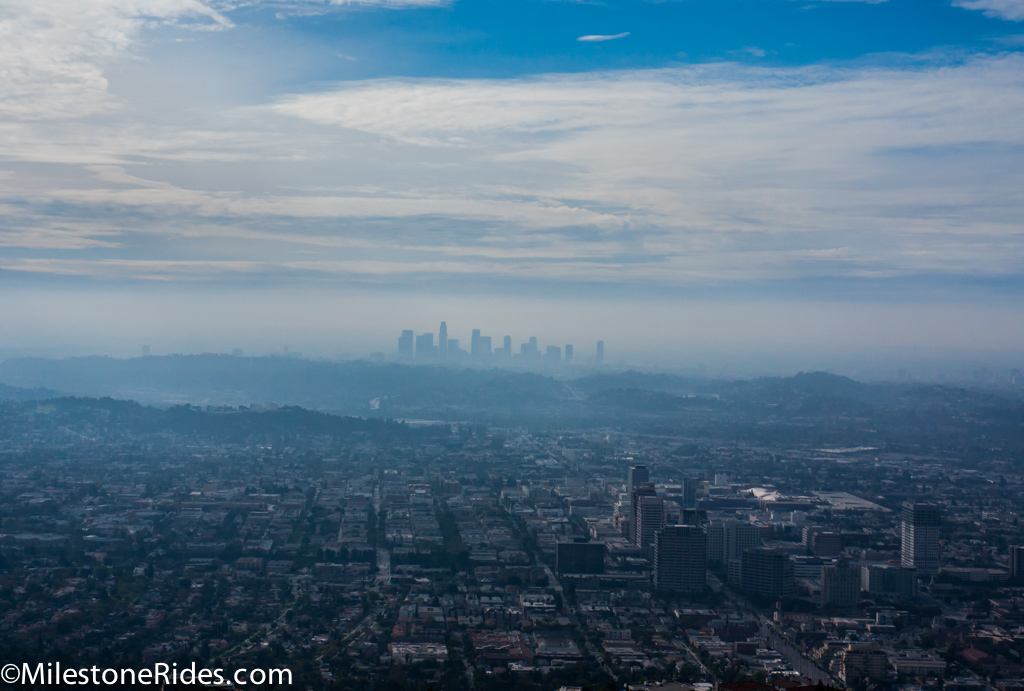 In the City of Glendale, most cyclists riding on Glenoaks Blvd tend to head down to Griffith Park and speed along the Los Angeles Bike Path for their weekend ride routine.  I suppose I am not in the majority as I watched a group of three riders turn down Sonoma Avenue as I continued on Glenoaks this past Sunday, January 26 at 9:00AM.  My destination was a Mobile gas station located on Mountain Street and Verdugo Road.  My riding partner, Errin Vasquez (@Area45) of the Frontage Roads blog, was waiting for me with his Salsa Fargo Ti to begin my third installment of bikexploring the Verdugos Mountain.

A couple of years ago a few of our friends started tweeting out @Area45 memes in jest, comparing him to the Chuck Norris of bicycling.  I know he will humbly deny any notion of being legendary, but his riding habits would prove otherwise (at least in my books).  Errin rides his bike consistently from the City of Alhambra into Hollywood everyday, which is a good 27 miles round-trip.  He has been known to add miles to his commute and to include steep climbs up through the City of El Sereno and Elysian Park.  He recently won a video contest through Salsa Cycles and got himself a titanium Mukluk fat bike to ride in Alaska for a few days last year (read his update on Salsa Cycle’s blog here).  He also participated in the Tour Divide race in 2011.  Unfortunately, he did not finish the race, but the conditions that year were pretty bad from what I’ve read and I would have given up myself if I was in his position.  Let’s just say walking in snow all day is not my idea of fun.  On top of that, he does the MS ride down to San Diego every year and is a dedicated randonneuring rider who participates in multiple brevets races.  In my books, he’s one hell of a rider! As both Errin and I started our ascent up to the trailhead entrance by Royal Blvd, we took the opportunity to catch up and reacquaint ourselves with one another.  Most of my questions centered around his Alaska trip last year.   We hung a right at the T-intersection on Old Phillips Road and immediately took another right on Kildonan Drive.  From there, we made our way straight up towards Sunshine Drive, which brought us to the “closed to car traffic” trailhead on the left.  Even at that point, we had a very good view of hazy Downtown Los Angeles skyline.  As we both maneuvered our bikes between the bars and deflated our tires so that we get more traction, I noticed my front wheel lost a considerable amount of air.  We did a quick check and pumped more air in, but it didn’t seem to retain the air, so we swapped out the tubes (on a side note, I later inflated that same tube at home and couldn’t find the puncture, and the tube even held air overnight).  With Errin’s help, we were able to get back on track after a few minutes and were finally on our way up. We maintained a fairly steady pace up Las Flores Mountain Way occupied with our conversations once again.  I was huffing and puffing my way up while Errin contributed to the lion’s share of the conversation.  We were about ⅔rds of the way up before we stopped to take a water and oxygen break.  Errin was very surprised of how fast we got up to that point because when he rode this a month ago, his pace was slower.  He commented that nothing beats a conversation pace.  I’ve experienced similar phenomenons when I’m just socializing with people on a ride and then out pace myself without even realizing it.  The hills are not so treacherous when you’re enjoying your conversation.  We finally crested the first top where we took a fairly long break on a cement platform to refuel and enjoy the scene, but clouds covered the skyline of Los Angeles and all its neighboring cities. After our break, we decided to ride the Beaudry North Motorway.  We descended quickly and  climbed our last hill up towards the KROQ-FM radio towers.  Errin led the way as his Salsa Fargo Ti with knobby tires happily carved down the gravel road, while I did my best to follow on my Vaya with deflated tires (which helped tremendously) for grip.  The gravel road was much smoother than I expected.  It was much better than the Stough Canyon entrance or even the Brand entrance, according to Errin.  Absent were the loose rocks and stones.  There were some parts that had softer sand, which reminded me quickly to pay attention as I drifted sideways in a brief split second. You can tell that mountain bikers love riding through this road as I spotted about 4 different ramps created out of packed dirt leading up to a boulder launch.  Even though we didn’t take advantage of these Easter eggs, Errin stopped me ⅓rd of the way down for a great photo op.  He told me that he caught air on one of the undulating bumps on the road, so he asked if I wanted to try to get a shot of him flying over it again.  We took 2 attempts, and the results were fantastic!  I switched my camera to a fast shutter speed and continuous shoot mode.  Here is the outcome of our efforts. The Beaudry North Motorway eventually led us down the fork, which was the beginning of the Beaudry South Motorway road.  We vowed to meet again and finish the ride up Beaudry South Motorway the next time.  But for now, we made our way to the trailhead, leading us onto Beaudry Blvd and eventually down Canada Blvd and Verdugo Road.  We decided to conclude a perfect ride by checking out a taco stand called, Tacos Azteca across the street from Glendale High School.  I couldn’t have asked for a better ending as we both continued to converse about our lives.  We bid adieu as Errin rode towards Colorado Blvd and I went west down Harvard towards Burbank.

If anybody who lives in the area and would like to join us next time, comment below!  We can set something up.  It’s always fun to ride with more people. 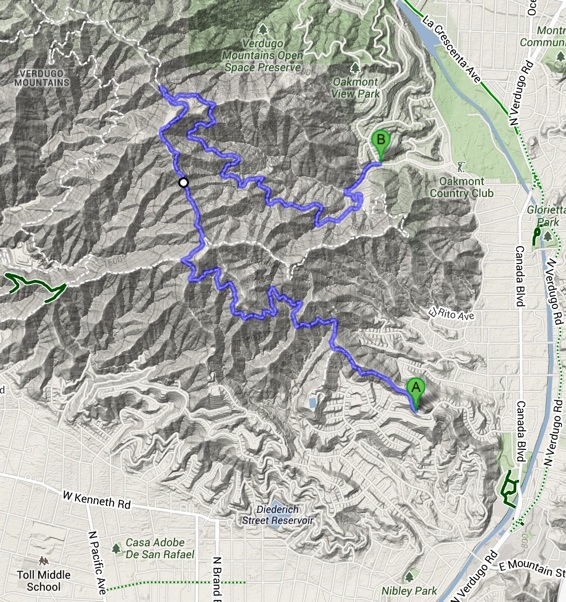 Map of our route from the East side of the Verdugos Mountain.