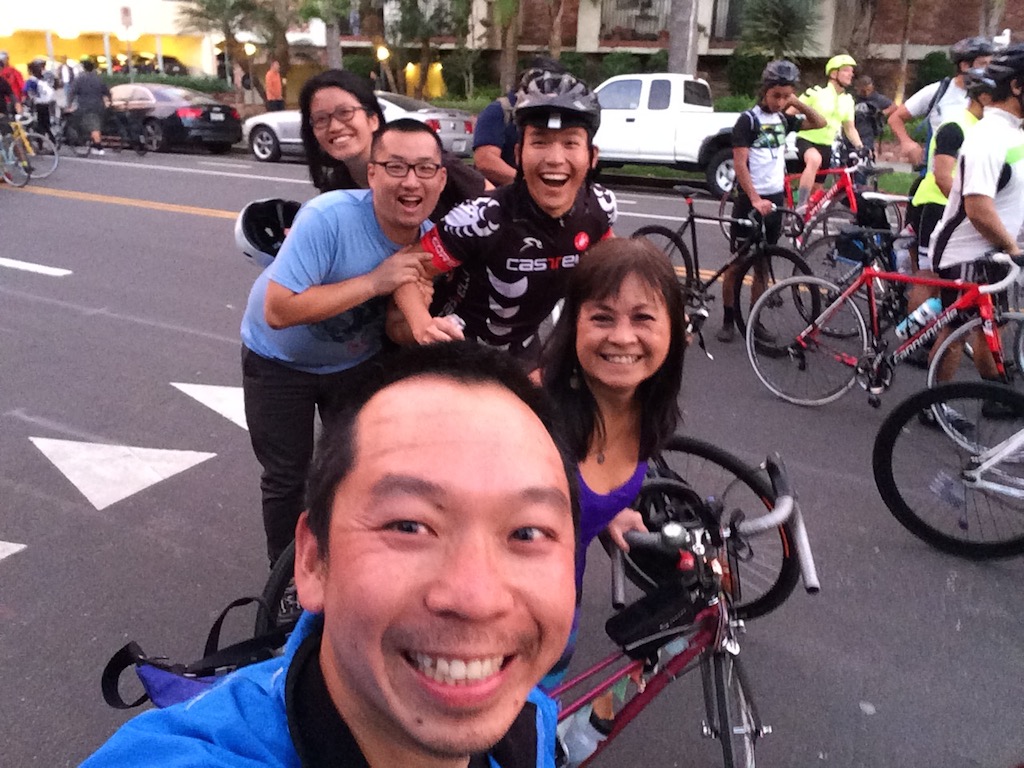 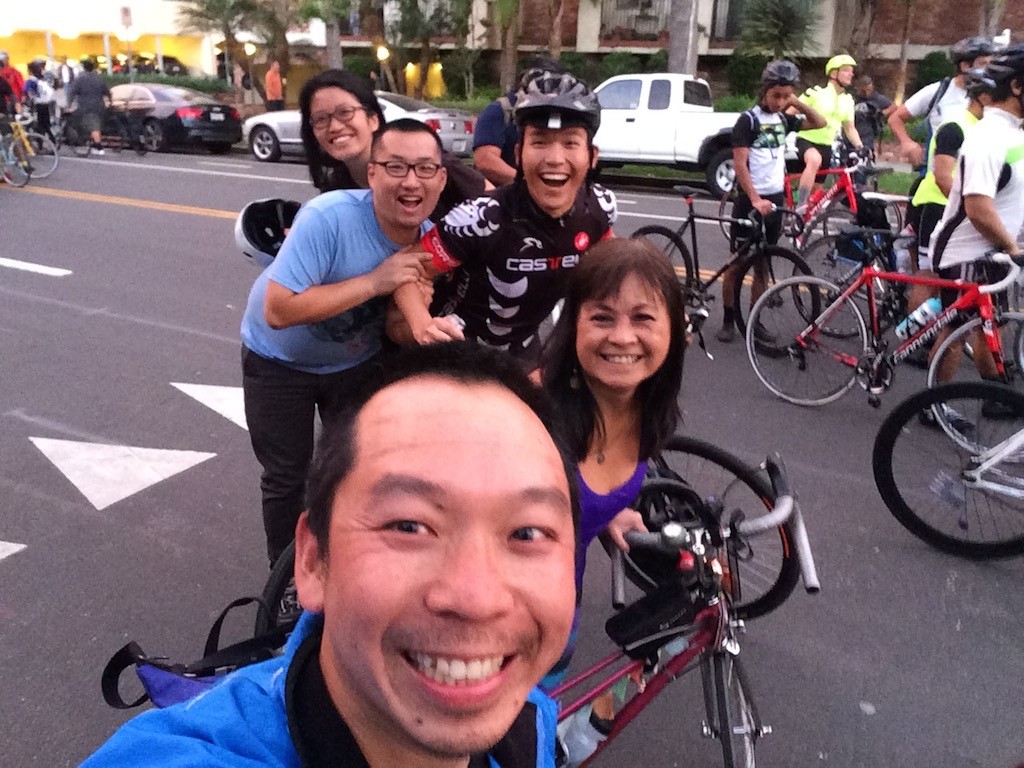 Group shot at the end of the ride.

When I told my friends in the LA bike community that this year would be the first time that I will be riding the LA Marathon route before the actual marathon begins, most were surprised. People thought I’ve already ridden several! Unfortunately, that is far from the truth. I’ve never made it out to prior rides, not even during last year’s controversial almost cancellation of the race.

It Started as a Race

For those who are not familiar with this, this use to be an unofficial event started through the Wolfpack Hustle group in 2010 when a group of cyclists raced through the LA Marathon course in search of bragging rights and dog tags handed out to winners in several categories. Ever since then, the race has grown bigger and bigger, attracting people from all over the country and world. When the organizer, Roadblock, decided to make this a legitimate race last year, the city almost shut it down. Luckily, they reconsidered with the agreement that this was only going to be a bike ride and no racing will take place.

Here is the video from 2012, just to give you an idea of racing conditions.

Exciting isn’t it? And yet I never made it out there to participate because of one reason or another. It has always been on the top of my list to do, and so when the opportunity presented itself this year, I immediately signed up. I also signed up for a local feeder ride provided by the Eastside Bicycle Club. 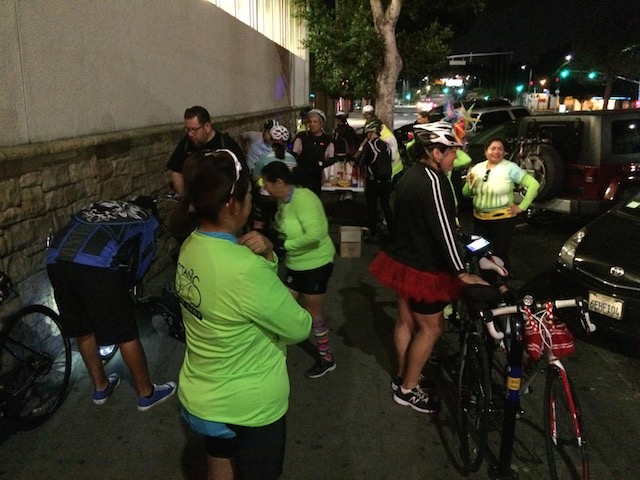 My alarm clock was set to 3AM on March 15th. I left my house at 3:30 and was riding through the quiet neighborhoods to the city of El Sereno. I arrived at the meeting point, the parking lot outside of Food 4 Less supermarket on Huntington Blvd. There was already a good-sized group gathered around a table with coffee, oranges, and all sorts of snacks for the riders, such great hospitality from this group. Everyone was so friendly and welcoming. Each person greeted me like a friend. Our fearless leader, Carlos Morales, who I’ve featured before on a blog post, arrived closer to 4AM. They quickly shut down the refreshments table, and we were all off on our journey towards the start of the ride.

Our group of about 20+ riders sped through the streets of Los Angeles with full speed and concentration. We picked up a few more riders in Chinatown, Monica Busby and her friend Kert. We then wiggled our way through Chinatown to get over to Sunset Blvd. From there, we patiently spun up and down the hill until we reached the crowd of people waiting right before Fountain. 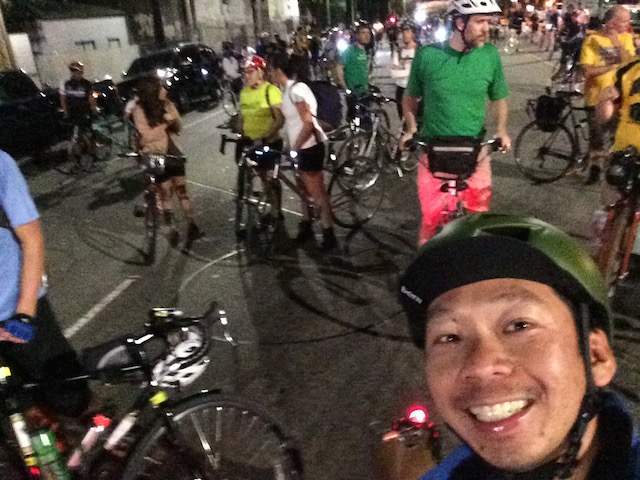 At the start of the ride Sunset / Fountain

I immediately spotted friends standing in the back. We caught up for a bit before a few of us decided to make our way towards the middle of the pack near the McDonald’s restaurant, where we found more folks. The ride didn’t actually start until it was closer to 5:30AM. The energy of the crowd was like electricity. The drone went up capturing an aerial video of us. People were taking selfies to document this occasion. Smiles were everywhere until the flood gate opened, and the crowd spilled onto the course.

Right out of the gate, it felt more like a race. People were just hauling ass down the road at very high rates of speed. Being caught up in the moment, I kept pace. Of my 5 years riding a bicycle, this was yet another brand new experience. The roads were completely closed off the entire way down to Santa Monica. I mean both sides were closed to traffic. Our herd of cyclists dominated the entire road as we snaked left and right in the darkness.

It was so thrilling and surreal.

People who were setting up stations for the marathon, paused to cheer us on and take in the amazing spectacle of the sea of riders. By the time we made it into Beverly Hills, I was pretty tired, but I mustered up more energy to ride on to Santa Monica. By the time we made it to the finish on Montana and Second Street in Santa Monica, we all piled into the intersection along with the crowd. The marathon officials did not allow us to cross the marathon finish line so they had us stop before then. 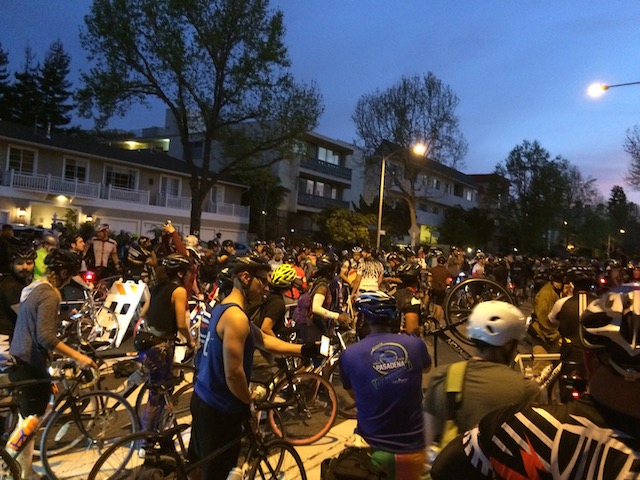 The fun ended at Montana and 2nd in Santa Monica.

Naturally, I started bumping into people I knew and chatted up about the ride. I eventually connected with my friend Joni Yung who convinced me to go check out Brentwood Village Farmers Market. We went with another fellow cyclist, Ellen. We bought some food and sat on San Vicente Blvd to watch the start of the marathon. This was also the first LA marathon that I’ve witnessed in person. It was fun cheering on the runners between mile 22 and 23. I am simply in awe that they ran the same course we rode.

There are several videos of the ride posted by a few of my friends here.

I am so glad I got to ride the streets of Los Angeles and go through this incredible experience. I keep on asking myself why I’ve never done this before. The race probably would have been a bit more chaotic in the early years, but would’ve been pretty fun nonetheless. I’m definitely not into the racing aspect of it, so maybe that was a reason why I didn’t really get into it earlier. Whatever it is, I am glad I got to do it in 2015. If the schedule allows it, I’ll be coming back next year! I suggest you make it an effort to do the same. There’s nothing like this other than maybe CicLAvia. 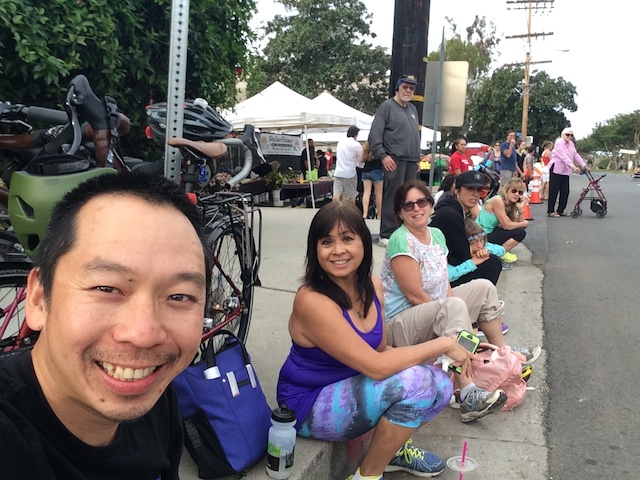 Watching at the 22 mile mark. 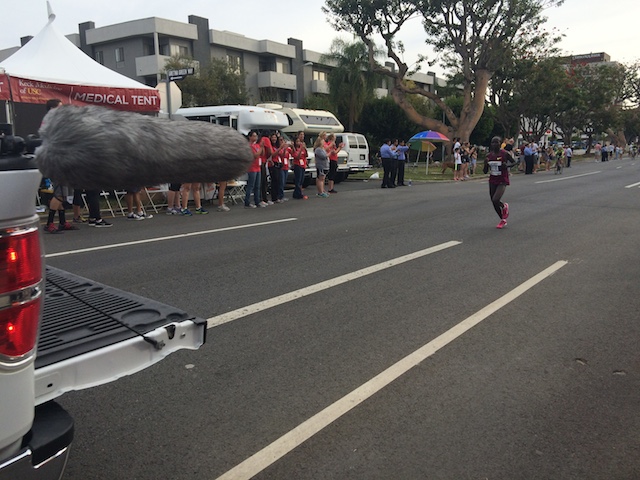